The cooperation projects that have been carried out between Laos and Thailand include infrastructure development for transportation integration, and cooperation in the fields of education, health, agriculture, trade, and tourism.- AFP

According to a press release from the ministry, the MOU will contribute to enhancing and promoting friendly ties between Laos and Thailand, as well as promote cooperation between the two institutes.

The MOU will be effective for a three-year period.

The Lao PDR and the Kingdom of Thailand have close links through their shared roots in traditions, customs, culture, and language, and share an extensive border both on land and water.

The press release noted that since the two countries established diplomatic relations in 1950, their relationship and cooperation have steadily broadened and seen an increasing number of fruitful results.

Leaders of Laos and Thailand visit each other’s country regularly and the existing cooperation mechanisms have continuously yielded results.

The cooperation projects that have been carried out include infrastructure development for transportation integration, and cooperation in the fields of education, health, agriculture, trade, and tourism. Many projects have been completed while others are in progress.

The press release made special mention of the provision of materials and other assistance by the Thai government, Thai private sector, and Thai people to the Lao government and people in response to the Covid-19 outbreak. - Vientiane Times/Asia News Network 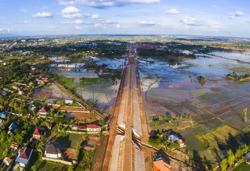