BANDAR SERI BEGAWAN, Aug 17 (Borneo Bulletin/ANN): The first of its kind Royal Brunei Airlines (RB) Dine & Fly flight took off on Sunday (Aug 16) morning with 99 passengers on board to experience a rare and memorable opportunity to view iconic landmarks of the country and key places on the island of Borneo from the air.

Taking off from Brunei International Airport at 10am, RB Dine & Fly flight BI 45 took 85 minutes with a live commentary by RB pilot and crew around the coast and borders of Brunei and other parts of Borneo including Mulu, Kota Kinabalu and Labuan.

During the flight onboard RB’s Airbus A320neo, the pilot directed passengers to several attractions that can be seen during a clear day.

Before returning to Brunei International Airport, the Dine & Fly flight circled around the Sultan Haji Omar Ali Saifuddien Bridge for passengers to catch a glimpse of the locally-famous structure.

Dato Seri Setia Dr Awang Haji Mohd Amin Liew Abdullah said, “During the COVID-19 pandemic, all businesses have to be creative to attract revenue. For RB, the airplanes are not flying to destinations as usual. This new concept will give the opportunity for the pilot to continue flying and also for the public who miss flying to be on board a plane.

“We are giving passengers the opportunity to see some of the interesting sites in Brunei Darussalam and its surrounding region. It is a short flight. You are having lunch in the air and enjoying sightseeing at the same time.

“Most importantly, the passengers are supporting RB during this extraordinary time. As we know, RB is only flying five per cent of its usual activities. We hope this Dine & Fly concept will create more interest among the public to fly and we may be looking at few other concepts in the future. People can also have special events on the flight.”

From the first flight, the minister hoped to look at the feedback from passengers for RB to evaluate and look at other options to offer. 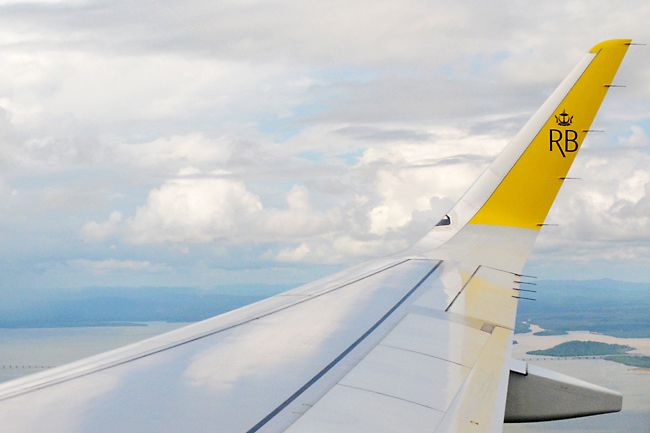 Following the government’s guidelines to curb the spread of COVID-19, RB has in place stringent standard operating procedures (SOP) to ensure the health and safety of cabin crew and guests. Beside body temperature checks for cabin crew and pilots, all RB aircraft undergo a thorough cleaning and disinfectant process.

Chief Financial Officer of RB Nurbahriah Eliza binti Abdullah reassured the public of the measures deployed by RB. “We have social distancing measures where the middle seats are left empty, while family members can sit together. Our aircraft is also equipped with High Efficiency Particulate Air (HEPA) filters which work well to eradicate germs. Brunei currently contained the spread of COVID-19 and we are not landing in another country.

“For individuals who want to have special moments or celebrate birthdays, I think this is a memorable experience. You can have many birthdays and anniversaries but you will only have one that has sightseeing Brunei from the air.”

She said there are about 300 people on the waiting list to get on the Dine & Fly flight.

In another development, a local man who is no stranger to prison life was jailed for 64 months last Saturday, for yet another brush with the law.

His last stint in prison was nine years, and he was released early this year.

Deputy Public Prosecutor Hajah Siti Mu’izzah binti Haji Sabli conducted the prosecution and revealed that the defendant had shoplifted a grinder tool from Kim Supersave in Kampong Tanjung Bunut, in the early evening of August 3.

His act was caught on CCTV.