Spokesperson of the Ministry of Foreign Affairs of Vietnam Le Thi Thu Hang at the press briefing held in Hanoi. - The Vietnam News/Asian News Network

HANOI, July 20 (Vietnam News/ANN): Vietnam has a full legal foundation and historical evidence to back up its sovereignty claims over the Truong Sa (Spratly) and Hoang Sa (Paracel) islands and calls for all countries to respect international law.

The foreign ministry spokesperson Le Thi Thu Hang made the remarks during a press briefing in response to Chinese foreign spokeswoman Hua Chunying’s series of tweets on the South China Sea (known in Vietnam as the East Sea).

They were likely triggered by US Secretary of State Mike Pompeo’s Monday statement which called out China for illegal maritime claims and activities in the disputed waters that go against international law and especially, the 2016 ruling of a Hague-based arbitral tribunal.

The Chinese foreign spokesperson spewed out numerous erroneous claims such as Chinese people’s activities in the sea “date back to over 2,000 years ago” or that China has “lawfully recovered” the so-called Nansha and Xisha islands from Japanese occupation and “resumed exercise of sovereignty” there.

Vietnam had exercised legal control over the two islands until Hoàng Sa was illegally seized and occupied by Chinese forces in 1974, while a number of geographical features in Truong Sa have also been taken by China.

"All countries have the responsibility and common interests in respecting the basic principles of international law," Hằng said, adding that the full respect to legal order at sea and "compliance with good faith" to the 1982 United Nations Convention on the Law of the Sea (UNCLOS) play an important role in the maintenance of peace, stability, co-operation and development in the sea.

Vietnam's consistent view is that UNCLOS 1982 sets out the legal framework within which all activities in the oceans and seas must be carried out, and it welcomes all countries' stances that align with this view, Hang said.

"We expect that all countries, together with Việt Nam, will bring the fullest efforts to contribute to the maintenance of peace, stability, co-operation and development in the South China Sea, and resolve the issues via dialogues and other peaceful measures in line with international law and the aspirations of countries in the region and the international community," the Vietnamese diplomat said.

She added that Vietnam "has always contributed in a positive and responsible manner to this course." 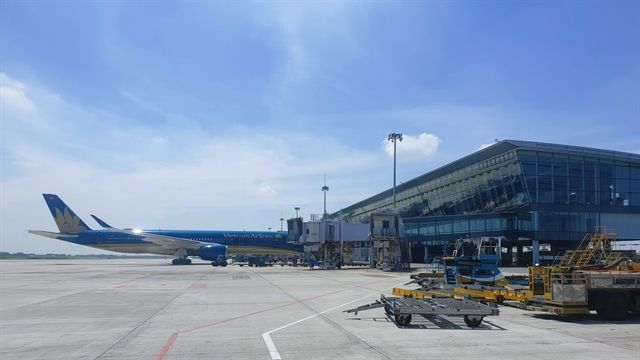 Aircrafts in front of the Noi Bai international terminal in Hanoi in mid-July. - Vietnam News

Some other Asean member countries who are claimants in the South China Sea dispute the same day also announced their stance regarding the latest remarks from the US.

Malaysia foreign minister Hishammuddin Hussein also released a statement, maintaining Malaysia’s position that “all parties must work together to ensure peace, security and stability in the South China Sea,” and that matters related to the sea must be resolved peacefully based on international law.

Under the direction of Prime Minister Nguyen Xuan Phuc, ministries and agencies are working with their foreign counterparts on the restoration of air transport links between Vietnam and several Asian countries and territories, foreign ministry spokeswoman Hang said when answering questions regarding the resumption of overseas flights with Covid-19 largely under control in Vietnam.

The Ministry of Foreign Affairs, she said, has informed foreign agencies in Vietnam about plans to resume flights to Seoul (Republic of Korea), Tokyo (Japan), Taiwan (China), Guangzhou (China), Vientiane (Laos), and Phnom Penh (Cambodia) from mid-July, based on ensuring compliance with prevention measures to ensure the coronavirus does not spread in the community.

The Ministry of Transport is also holding discussions with relevant agencies in these countries and territories to reach consensus on flight and route specifics, Hang added.

Vietnam will prioritise people currently allowed to enter the country, including Vietnamese citizens, foreign experts, investors, business managers, and skilled workers, those entering for diplomatic and official purposes, and other special cases, she said.

All arrivals into Vietnam must comply with medical quarantine rules.

Vietnam has banned foreign arrivals since late March in a bid to contain the spread of the Covid-19 pandemic. - Vietnam News/Asian News Network