Vietnam earned US$1.71 billion from exporting nearly 3.5 million tonnes of rice in the first half of this year. — VN

HANOI (Vietnam News/ANN): Rice quotas for Vietnam under the EVFTA are expected to push Vietnam's rice exports up from the second half of this year, according to the Ministry of Industry and Trade (MoIT).

Under the Vietnam-EU Free Trade Agreement (EVFTA) effective from Aug 1, the EU pledges to provide an annual rice quota of 80,000 tonnes to Vietnam

Tran Thanh Hai, deputy director of MoIT’s Import and Export Department, said that in 2019, Vietnam had a modest value at US$10.7 million from rice exports to the EU because of high import tariffs in this market.

"The rice quotas of 80,000 tonnes to Vietnam according to the commitments in the EVFTA is an opportunity for Vietnam to enhance its rice exports to this market, which has annual demand of about 2.5 million tonnes of rice," Hai told the Hai quan (Customs) newspaper.

Meanwhile, the EU also sets a range of conditions for those quotas such as origin certificates on Vietnamese rice. The rice exported to EU must have authenticity certificates issued by Vietnamese authorities.

To take advantage, the Ministry of Agriculture and Rural Development (MARD) and the MoIT are compiling a draft decree guiding the registration process for certification of rice categories exported to the EU to submit to the Government for approval.

According to this draft, eligible rice varieties exported to the EU must meet Vietnam's technical standards and regulations on quality, region cultivating rice varieties, and processes of harvesting, preserving, grinding, milling and packaging rice.

Pham Thai Binh, general director of the Trung An High-tech Agriculture Joint Stock Company in Can Tho City, said Vietnamese rice reaching those requirements to enter the EU with low tariffs would help Vietnam increase its rice exports in the future.

"When the tariff for Vietnamese rice is reduced to zero per cent, it gives local rice products more advantages in competing with rice from Cambodia and other countries in the EU market," Binh said.

The agriculture sector expects to significantly increase exports of many key products until 2025 thanks to the EVFTA, such as rice (up 65 per cent), sugar (8 per cent), pork (4 per cent), forest products (3 per cent), and cattle and poultry meat (4 per cent).

However, those products must overcome many trade barriers of the EU, such as technical barriers on origin, product quality and intellectual property protection.

Therefore, experts said that local farmers and businesses in the agriculture sector have to improve production capacity and product quality, find export markets and build brands for agricultural products.

In the long term, strict regulations on quality standards for exported Vietnamese agricultural products, including rice, would force the agriculture sector to undertake comprehensive restructuring in production and business.

According to MARD, Vietnam earned $1.71 billion from exporting nearly 3.5 million tonnes of rice in the first half of this year, up 17.9 per cent in value and 4.4 per cent in volume year-on-year. In June alone, 409,000 tonnes of rice worth $207 million was shipped abroad.

The Philippines was the top buyer between January and May, importing 1.3 million tonnes of Vietnamese rice worth $598.6 million, or 40 per cent of total rice exports. They were up 23 per cent in volume and 42 per cent in value from a year earlier.

During the first five months, markets to which the value of rice exports enjoyed the strongest year-on-year growth were Senegal (18.3-fold), Indonesia (2.9-fold), and China (2.3-fold). 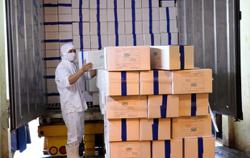