KUALA LUMPUR: An asteroid measuring between 290 to 650 metres is expected to fly close to earth Saturday night, coinciding with Halloween. 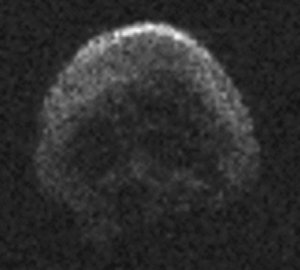 This image of asteroid 2015 TB145, a dead comet, was generated using radar data collected by the National Science Foundation's 1,000-foot (305-meter) Arecibo Observatory in Puerto Rico. The radar image was taken on Oct. 30, 2015, and the image resolution is 7.5m per pixel. - NAIC-Arecibo/NSF

The National Space Agency (Angkasa) in a statement Friday said Asteroid 2015 TB145 also known as 'Spooky' was found by an astronomer from the United States' Near-Earth Object Program on Oct 10, moving at a speed of 35 km per second, 29 times faster than a bullet.

"It is not expected to collide with earth, and it will only cross the moon's orbit at a distance of 480,000 km from earth, about 1.3 times the distance between earth and the moon.

"At its closest position to earth, it will reach the level of brightness of around 10 magnitude and can be seen using the telescope," according to the statement.

Angkasa, through its Langkawi National Observatory (ONL), will conduct observations and research on the asteroid to share information with international astronomy organisations if the sky is clear.

For further enquiries, members of the public can contact ONL at 04-9668870 or the National Planetarium at 03-2273 4303 or visit the Angkasa website or its Facebook and Twitter pages for the latest information. More information is also available from NASA here and here. - Bernama