By DINA MURAD and NATASHA JOIBI

KUALA LUMPUR: Another disturbance broke out in Low Yat Plaza following Saturday's melee between customers and sales clerks in a smartphone shop, but police managed to contain the situation in the nick of time.

On Sunday night, a group gathered at the plaza in an apparent continuation of Saturday's fiasco.

The group numbering over 100, is believed to have been led by Malay-Muslim group Pertubuhan Kebajikan dan Dakwah Islamiah Se-Malaysia (Pekida), gathered near the mall by around 6.30pm. 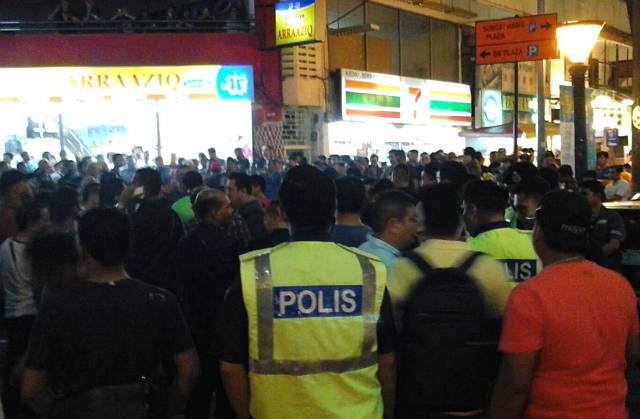 Dang Wangi CID Chief DSP M. Gunalan said about 20 to 30 police officers, including plain-clothes policemen, were deployed to the scene to monitor the situation.

"We held negotiations with the group, but there were a few people who did not heed our instructions," he explained.

DSP Gunalan said police had to apprehend a man, believed to be working in the shopping complex, from charging towards the group.

The man was carrying a wooden stick.

"We arrested him and took him to the station. He was only one man going against a group of many. He could have been hurt," he added.

"We want to get proper justice," said a member of the group who identified himself as an "Ayahanda".

"We will provide a lawyer to uphold justice," he said, adding that they were there "only to protest".

The mall was cordoned off by police at about 9pm.

The group had gathered to protest what they claimed was "biased investigations" by the police.

At about 10pm, the situation had subsided and the crowd had dispersed.

"Three were arrested in connection with theft," he said.

Meanwhile, one individual was arrested for provocative behaviour at the protest Sunday. Another four individuals will be picked up to assist in investigations.

SAC Tajuddin assured that police will conduct fair investigation towards all those involved.

On Saturday, a fight erupted between the thugs and sales clerks after a group of youth returned to take revenge against the retailers who allegedly caught one of them shoplifting earlier on Saturday.

Some commenters on social media claimed that the brawl was due to one of the youths being sold a fake phone, but the claim has not been verified.

Police are also hunting the remaining youths who caused around RM70,000 worth of damage to the shop.