The injuries Joan sustained during the robbery.

KUALA LUMPUR: A beautician escaped further injuries in the hands of a parang-wielding robber by thinking fast on her feet.

Joan Chow, 25, completed her shift at 9pm Wednesday and was on her way to get her car with her colleague Ann Tan, 20, when they were confronted by two men on a motorcycle near Taman Selayang Utama, Batu Caves.

We were walking to our car which was parked some 100m away from our workplace.

A motorcycle came from the opposite direction and stopped us in our tracks. The pillion rider got off the bike brandishing a parang while shouting “Hoi!,” said Chow on Friday. 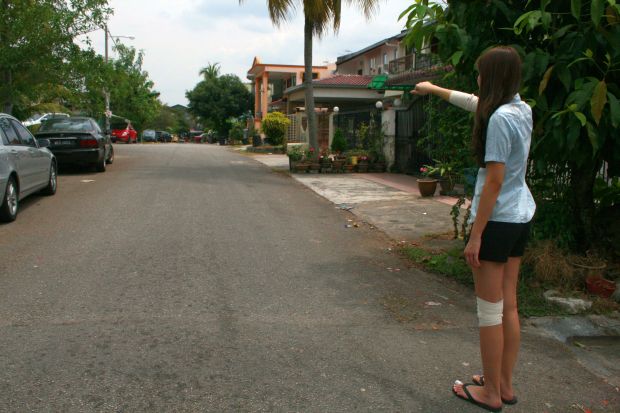 Joan pointing to the area where the incident took place

The beautician explained that she threw her handbag at the pillion rider and made their escape as the robber bent over to pick up the item.

;Once I was aware that we were being robbed, I knew I had to do something fast to keep Ann and myself out of harm’s way.

I threw my bag at the pillion rider to divert his attention,” said Chow.

The beautician, still shaken from the incident, said that the robbers fled as soon as they had obtained her handbag.

The men had acted silently and I was not able to make out their faces in the dark,” Chow explained.

The beautician added she had fallen down twice and sustained injuries to her arms and left leg in a bid to to escape the robbers.

When contacted, Gombak OCPD Abdul Rahim Abdullah confirmed that police have received the report and are a manhunt for the two criminals are underway.

The case has been classified as gang robbery and is being investigated under Section 395 of the Penal Code, he said.