A German doctor has come up with a way to reduce reliance on immunosuppresive drugs and treat inflammatory conditions using the body’s own white blood cells.

OUR immune system is a finely-tuned organic structure, designed to defend our bodies against that which it perceives as “other”.

And while that is essential to our health and survival when it comes to foreign invading pathogens, it becomes a life-threatening problem when doctors are trying to save lives through organ transplants.

As donated organs come from another person – a foreign source, they are naturally perceived as “other” by the recipient’s immune system. If it weren’t for the cocktail of drugs dampening their immune system, such patients’ bodies would target and destroy the foreign organ(s).

However, the drugs are an all-or-nothing approach, meaning that the patient is also more vulnerable to harmful organisms that might infect them.

A transplant patient’s lifelong drug regiment needs to be finely balanced – effective enough so that their immune system doesn’t attack the new organ, but not so effective that the body cannot defend itself against most infections.

Not an easy situation for either patient or doctor, as you can imagine.

As such, one important area of research in the transplant world is looking at how to decrease the rate of organ rejection without overcompromising the body’s immune system.

Transplant surgeon Prof Dr Fred Fändrich is one of those researchers.

During his recent visit to Kuala Lumpur, the Schleswig-Holstein University Hospital, University of Kiel, Germany, Clinic for General Surgery and Thoracic Surgery director shares that his initial work looked at the effect of embryonic stem cells in inducing tolerance towards organ transplants in rats.

“What we realised was that, in about 80% of cases, these hearts were accepted without any immunosuppressive treatment. So, that is what you would call tolerance.

“And then, 100 days later, I looked at those animals whose hearts were still beating (to see) what cells derived from these embryonic stem cells were responsible for this tolerance induction.

“And what I found was that about 90% of the cells derived from the original injected stem cells were monocytes.”

These monocytes piqued Prof Fändrich’s interest, as in 20% of the transplant cases, the embryonic stem cells had caused tumours in the liver without any known reason, making it too risky to use in humans.

“So, in this case, obviously, they deactivated the immune response,” he says.

The next step was to find out how to programme the monocytes to ensure that they only deactivate the immune system.

After further experimentation, Prof Fändrich was able to accomplish just that, with a subsequent animal study using the deactivated monocytes instead of embryonic stem cells in 2004 proving as successful as the initial study.

Ten years on, the deactivated monocytes are currently in phase II/III clinical trials, along with other promising cellular immunotherapies in the multicentre European and American ONE study.

However, Prof Fändrich notes that the four kidney transplant patients in the first two phase I clinical trials he conducted using the deactivated monocytes are still doing well.

More importantly, they were able to be weaned off the standard immunosuppresive drug regiment within six months of their surgery.

This is particularly important as these anti-rejection drugs can cause serious side effects. For example, corticosteroids like prednisolone, can result in osteoporosis, diabetes and hypertension.

Six years down the road, these patients need only take a very low dose of one of the three usual immunosuppresant drugs – a calcineurin inhibitor, typically cyclosporine.

In fact, Prof Fändrich believes that they can stop taking even that one drug, as the patients have shown genetic markers indicating that their bodies have accepted the new organs.

However, the patients themselves are reluctant to completely stop their medication.

“The point is that patients don’t have any side effects from these drugs,” he says. 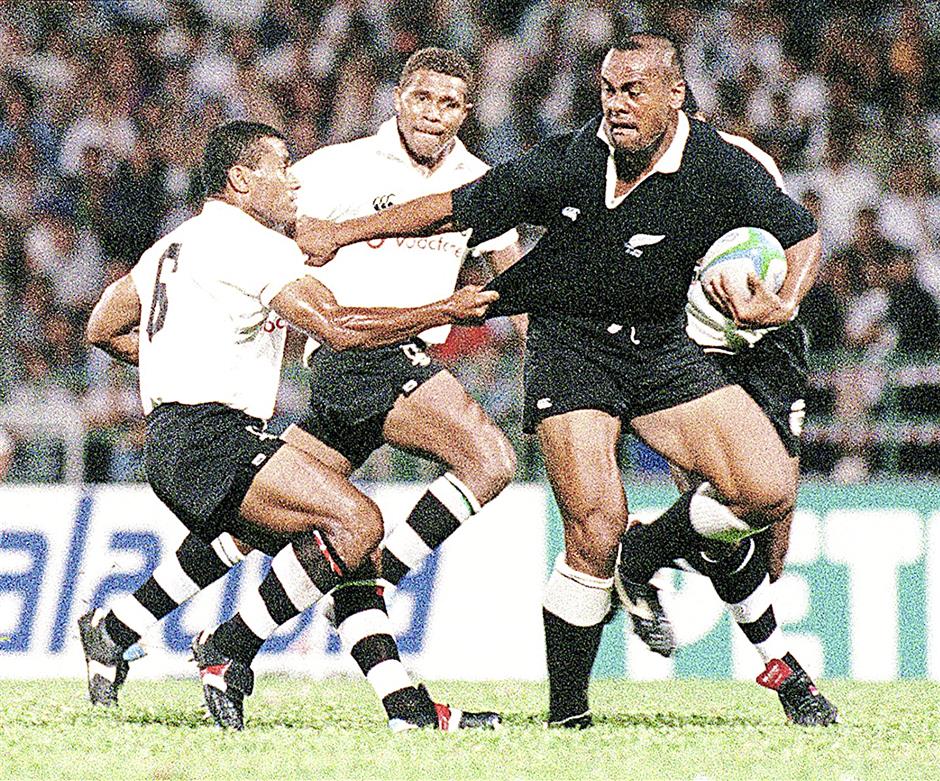 Kiwi rugby player Jonah Lomu (in black) in action during the 1998 Kuala Lumpur Commonwealth Games. Lomu required special permission to play professional rugby after his kidney transplant in 2004 as one of the immunosuppresant drugs he is on is a banned substance in sports. Prof Fändrich’s programmed monocytes promises to reduce the need for such drugs. –Filepic

Prof Fändrich also thought that if these reprogrammed monocytes could be used in allogeneic cases where the donors and recipients are different, they should also work in autologous cases where the recipient is basically using his own cells.

“In autoimmune diseases, you have rejection, more or less, of your own organs, based on auto-aggressive T-cells, which attack your organs.

“And it is also the T-cells that reject the transplant. So I thought if it could work for transplants, it should also work for autoimmune diseases.”

So, in 2003, he started a series of preclinical studies, looking into the therapeutical effectiveness of his deactivated monocytes in autoimmune diseases like colitis, inflammatory bowel disease, rheumatoid arthritis and multiple sclerosis.

With the success of these animal experiments, he then tested the monocytes in a patient with a rare form of vasculitis (where the immune system attacks the body’s own blood vessels) known as granulomatosis with polyangiitis (previously called Wegener’s granulomatosis) in 2005.

The patient, who was on high-dose immunosuppresive drugs for her progressively severe condition, reported that she had had no acute episodes in the three months since the treatment, although she still exhibited symptoms of the disease.

Now, nine years later, the patient is only on one drug, which had not worked on her earlier, and is quite well.

In addition to the deactivated monocytes, Prof Fändrich has also discovered a way to dedifferentiate adult monocytes back to their precursor cells, which have certain stem cell properties.

These programmable cells of monocytic origin (PCMOs) have been used by him to treat conditions that have their root in inflammatory processes.

“By now, I know that the major impact they have is from their very strong anti-inflammatory property,” he says.

He explains that many diseases are linked to chronic inflammation in our bodies, including atherosclerosis and neurodegenerative diseases.

“So, we see that if we inject these cells, they get rid of the inflammation and allow the stem cells in place to work again.”

Every organ in our body has a cache of stem cells to help in repairing injuries or replacing old cells. However, according to Prof Fändrich, when inflammation occurs, it raises the acidity levels in the affected cells; stem cells stop working when the pH is below 7.2.

“These we use for coronary artery disease, where you have atherosclerosis; stroke patients; for patients with cognitive impairment like Alzheimer’s; or for patients with degenerative joint arthritis,” he says.

In order to facilitate this process. Prof Fändrich also prescribes various oral supplements that patients have to take for three to five days before the cellular treatment.

These include a procainium-based (from the anaesthetic drug procaine) supplement, which acts only within cells to raise their pH; a supplement to support mitochondrial function, which helps increase energy production; and supplements that help detoxify the patient, which contain antioxidants and compounds that bind and help dispose of metals within the body.

“These also have a preventive effect, so those who don’t have a disease can still take them on their own,” he says, adding that he himself takes this detox cocktail once every three months.

His colleague has also developed a way of programming monocytes to selectively attack tumours in cancer patients who have stopped responding to other treatments.

Prof Fändrich says of this treatment: “In a lot of cases, we can stabilise, and even reverse the process in some patients. I won’t call it a cure, but they have very good quality of life because the treatment has no side effects. And they gain time – a lot of years.”

Since 2005, he has treated hundreds of patients on a personal basis without any side effects, as the therapy uses the patient’s own white blood cells.

But his monocytes will be put to the proper scientific test in three phase II clinical trials projected to start at the end of the year. The trials will look at coronary artery disease, Alzheimer’s disease, and vasculitis in granulomatosis with polyangiitis and systematic lupus erythematosus, respectively.

“I would like to look at diseases where patients don’t have another option, where standard care doesn’t offer anything,” he says.

The treatment programme usually begins with the patient’s blood being drawn to obtain their monocytes.

While the monocytes are being processed by Prof Fändrich’s patented methods, the patient is then started on the supplementary detox programme for three to five days.

Five to seven days after the patient’s blood is drawn, the reprogrammed monocytes are ready to be injected into the patient.

The number of injections required depend on the patients and their conditions.

For cancer patients, this includes how soon they decide to undergo the cell therapy, as well as the fact that the lifespan of the programmable cells is about six to 12 months in the body. For those with autoimmune and degenerative diseases, it depends on when and if their symptoms reappear.

He is currently working with Boga Valley Corporation to bring the health supplements to Malaysia.

However, they have decided to wait until the cellular therapy receives the European Medicines Agency approval before bringing it to Malaysia.

Four ways to help prevent a stiff neck
Platelet-rich plasma therapy could help in IVF
Covid-19 still an emergency, says WHO
Leprosy is no longer a major threat, but it's still being transmitted
Why mental health problems worsen in January
Germans to do pig-to-human heart transplants in two years
Eating less is more effective for losing weight than intermittent fasting
Cord blood stem cell transplant can save many lives
You can be young and still get a stroke
Want to remain fertile? Then change your lifestyle