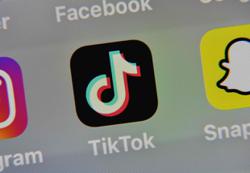 'Social media rewards outrageous behaviour, and the more outrageous, the bigger the bragging rights,' the American Academy of Pediatrics said on its website. — dole777 on Unsplash

A recent FDA warning about the latest social media challenge to go viral has brought renewed focus on the dangerous trend that endangers impressionable children and teens.

The need for affirmation on social media heightened by peer pressure can lead to dangerous consequences, as stunts like eating a Tide detergent pod, holding one’s breath until they pass out or ingesting chicken cooked in NyQuil have injured young people and even led to fatalities.

“That’s where the danger lies, in immature children combined against very powerful algorithms and the desire to be liked and accepted,” said Titania Jordan, chief parent officer of Bark Technologies, an app that gives parents control over their kids’ Internet activities.

The latest trend is the so-called NyQuil chicken challenge, which has people filming themselves cooking chicken soaked in the over-the-counter cold and flu medication and then eating it. The bizarre stunt appears to have originated on the website 4Chan in 2017 and made its rounds earlier this year. The FDA last week issued a warning to kids not to try this at home.

While there have been no reported injuries or deaths for the Nyquil chicken challenge as of yet, the same cannot be said of past stunts. The most deadly may have been the “blackout challenge,” which emerged in 2008 and became trendy again earlier this year. Also referred to as the “choking challenge” or the “pass-out challenge,” it encourages users to hold or otherwise cut off their breath until they pass out due to a lack of oxygen. It was linked to more than 80 deaths back when it first emerged, per the CDC, and more have died since it resurfaced last year on TikTok.

TikTok is being sued for wrongful death after three girls, from Texas, Philadelphia and Milwaukee, died trying to recreate the choking challenge.

The platform says it investigates any report about “dangerous or harmful challenges circulating online.”

The psychosocial components of what compels an impressionable youth to try such practices has parents and others stymied, Jordan told the Daily News.

“TikTok is a huge part of teen and tween culture and includes everything from fashion and sports to music and memes,” Jordan said. “And unfortunately the challenges that are harmful to human life can take off just as virally as some of the more fun or benign challenges.”

A teen “might want to hop on the train of going viral,” she explained.

“Whether it’s Tide pods or a morning-after pill or Benadryl, it’s really less about a specific pharmaceutical or ingredient and more about — there’s going to be peer pressure to push the envelope,” she said. “There has always been peer pressure. Now there’s the added element of views, and virality and engagement — shares, comments.”

Few parents realise that their child could be susceptible, she said.

“Social media rewards outrageous behaviour, and the more outrageous, the bigger the bragging rights,” the American Academy of Pediatrics said on its website. “It’s a quick-moving, impulsive environment, and the fear of losing out is real for teens. That environment plays into a teen’s underdeveloped ability to think through their actions and possible consequences.”

Besides being “silly and unappetising,” the faux chicken dish could be dangerous and even lethal, the FDA said. NyQuil’s makers, too, discouraged the use of their product with poultry or any other food.

The FDA recently warned against all potentially dangerous social media challenges, especially those involving medicines. The agency cited earlier challenges, too, including the Benedryl challenge which involves participants filming themselves consuming large doses of the over-the-counter antihistamine medication diphenhydramine and the effects of the resulting hallucinations.

Paediatrician and child safety and injury prevention advocate Dr Nkeiruka Orajiaka is familiar with the fallout from these social media-driven challenges. “I have seen people with injuries from prior challenges, like the milk crates, the Benadryl challenge,” she said, alluding to people filming themselves climbing gingerly up a pyramid of the plastic containers, and usually falling.

Parents can step in to prevent such incidents, experts said.

“I think a lot of parents don’t want to talk about those challenges,” Orajiaka said. “It’s about finding a way to have these conversations before they actually happen.”