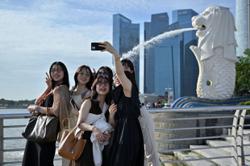 The Singaporean was on Sept 8 sentenced to 20 weeks’ jail after pleading guilty to one count each of threatening to distribute his girlfriend’s intimate material without her consent and another of instigating her to commit voyeurism. — Photo by Sora Shimazaki: https://www.pexels.com/photo/close-up-photo-of-a-wooden-gavel-5668481/

SINGAPORE: A 25-year-old man demanded of his girlfriend that she send him nude photos of herself five times a week and when she refused, he threatened to commit suicide, beat her, or post her intimate pictures online.

In early 2020, the accused, who cannot be named due to a gag order to protect the victim’s identity, told her that her nude photos no longer satisfied his sexual desires.

Fearing he would act on his earlier threats, the woman, 23, suggested he imagined himself having sex with her mother. He then demanded that the victim take obscene photos of her mother and send them to him and she complied.

The Singaporean was on Sept 8 sentenced to 20 weeks’ jail after pleading guilty to one count each of threatening to distribute his girlfriend’s intimate material without her consent and another of instigating her to commit voyeurism.

A charge each of voluntarily causing hurt and electronically transmitting obscene material were taken into consideration for his sentencing.

To fulfil her boyfriend's perverse desires, the victim had secretly taken a photo of her mother coming out of the shower in their home in 2020.

Later that year, the accused, who works as a food delivery assistant, electronically sent nude photos of his girlfriend to a stranger for sexual gratification.

On Feb 28 last year, the accused instructed the victim to think of ways to satisfy his sexual desires. When she replied that she could not do so, he threatened to distribute her intimate images and recordings on social media platforms knowing it would cause her distress.

Out of fear, the woman said she would do anything he wanted and suggested having sex with strangers for him to watch. The accused rejected the idea.

A few weeks later, the accused called the victim again and told her that he felt depressed but also sexually aroused and "needed something extreme to satisfy him".

He demanded she contact strangers asking to have sex with them and send him their conversations. If she refused to do so, he would set her mother's obscene photo as his display picture on social media platforms where it would be publicly visible.

The victim complied to his request using dating app Tinder.

On March 14 last year, the victim made a police report. When the accused learnt of this, he deleted all the messages he had exchanged with his girlfriend, as well as her intimate photos and recordings.

The material was not recovered and as a result, police investigations were hampered. The court heard that the couple has since broken up.

Seeking 18 to 21 weeks' jail, Deputy Public Prosecutor Bryont Chin said the accused's threats were severe as his girlfriend's intimate photos and videos could be immortalised on the Internet and further propagated.

He also noted the depravity of the accused's conduct in asking his girlfriend to take an obscene photograph of her mother.

In mitigation, the accused's lawyer Mr S. S. Dhillon said his client admitted he was possessive in nature and committed the offences due to a lapse in judgement.

"The fear he received from his arrest, police investigations and court attendances has completely shell-shocked him. He will never dare to be anything less than a law abiding citizen henceforth," said Mr Dhillon.

For threatening to distribute intimate material, an offender can be jailed for up to five years, fined and caned.

For instigating someone to commit voyeurism, an offender can be jailed for two years, fined and caned.