Shoppers looking for items on the ecommerce platform can tap the microphone logo on the app’s search box and speak their search request, according to a video published on Taobao’s account on microblogging site Weibo on Tuesday.

The system can recognise the dialects of Tianjin, Shandong, Henan, Hebei and northeast China, according to Taobao, whose parent Alibaba also owns the Post.

The official spoken language in mainland China, also known as Putonghua, is based on Beijing’s Mandarin dialect – one of hundreds of dialects spoken across a vast country of 1.4 billion.

Although the government has been promoting Mandarin usage for decades, many from older generations are still more comfortable speaking their native dialects and have limited knowledge of standard Mandarin.

This makes it difficult for them to use the prevalent Chinese typing method on the mainland, which is based on a romanised Mandarin system called “pinyin”.

Taobao’s new feature comes as the ecommerce giant faces sales pressure amid economic headwinds. China’s gross domestic product grew only 0.4% in the second quarter, the worst since the first quarter of 2020, when the coronavirus shut down large swathes of the country, driving GDP down by 6.8%.

In June this year, national retail sales rose just 3.1% from a year ago.

“Our future strategy going forward will shift from a focus on new user acquisition, because we already have within that one billion annual active consumer user base essentially all of the active consumers in China,” he said. 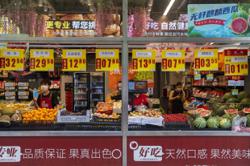