BEIJING: With no one at the wheel, a self-driving taxi developed by tech giant Baidu Inc is rolling down a Beijing street when its sensors spot the corner of a delivery cart jutting into its lane.

The taxi stops a half-car-length away. “So sorry,” a recorded voice tells passengers. The steering wheel turns on its own as the taxi makes its way around the cart. A Baidu technician watches from the front passenger seat.

Baidu is China’s highest-profile competitor in a multibillion-dollar race with rival autonomous vehicle developers including Alphabet Inc’s Waymo and General Motors Co’s Cruise to turn their futuristic tech into a consumer product.

Baidu and a rival, Pony.ai, received China’s first licenses in April to operate taxis with no one in the driver’s seat but with a safety supervisor on board. That came 18 months after Waymo started driverless ride-hailing service in Phoenix, Arizona, in October 2020.

Founded in 2000 as a search engine operator, Baidu has expanded into artificial intelligence, processor chips and other technology. It says its autonomous vehicles could, if successful, make driving cheaper, easier and safer. 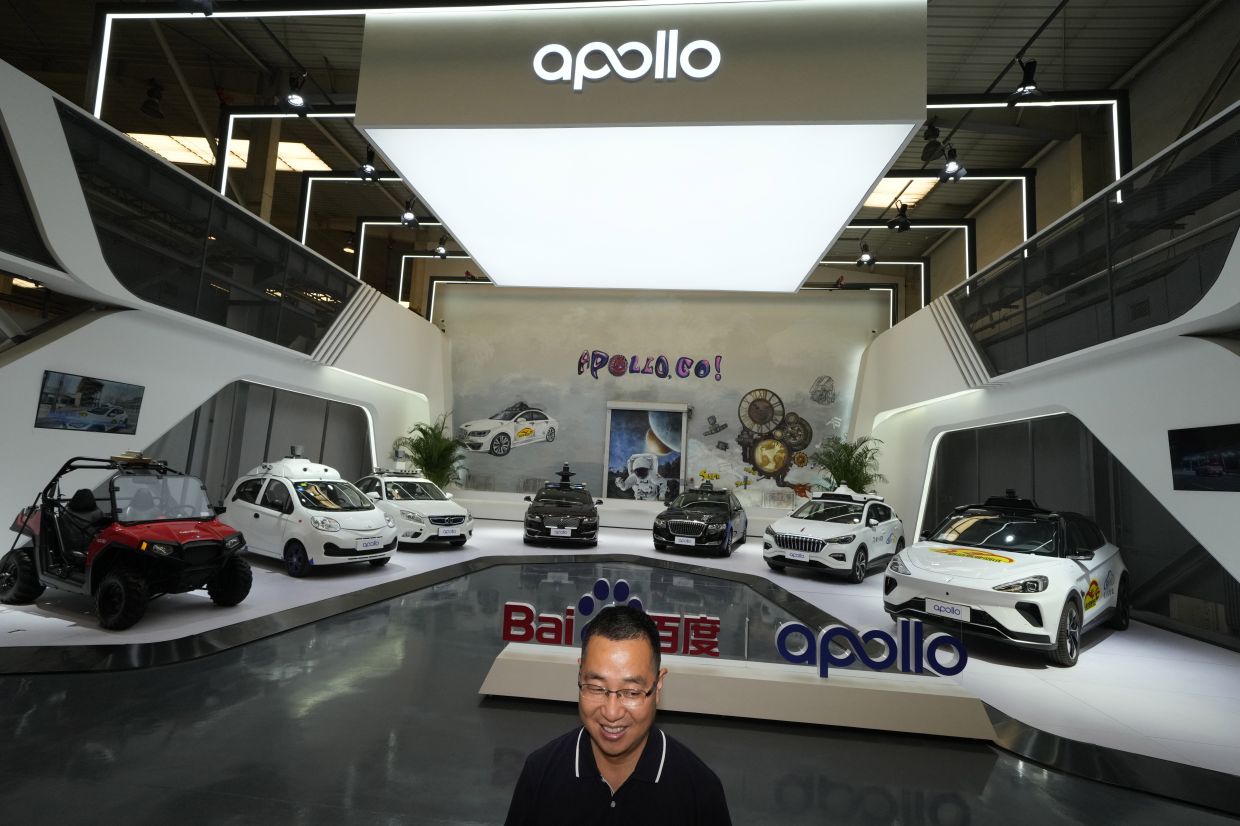 Autonomous driving is one of an array of emerging technologies from artificial intelligence to renewable energy that China companies are pouring billions of dollars into trying to create, urged on by the ruling Communist Party.

Beijing wants to join the United States, Europe and Japan in the ranks of technology powers to build its prosperity and global influence. That holds out the possibility of new inventions but also fuels tension with Washington and its allies, which see China as a strategic challenger.

ALSO READ: Baidu’s self-driving taxis are popping up all across China’s megacities

Taxi service with a driver at the wheel to take over in an emergency started in 2020 and has expanded to Beijing, Shanghai and eight other cities. Apollo Go says it provided 213,000 rides in the final quarter of last year, making it the world’s busiest self-driving taxi service.

For rides with no driver and a supervisor in the passenger seat, Apollo Go started in a 60-square-kilometer (23-square-kilometer) area of Yizhuang, an industrial district on Beijing’s southeastern outskirts with wide streets and few cyclists or pedestrians.

“It might feel a little safer” than a human driver, Zhao said. “Sometimes there are small objects, maybe some that people don’t notice. They can spot them and stop.” 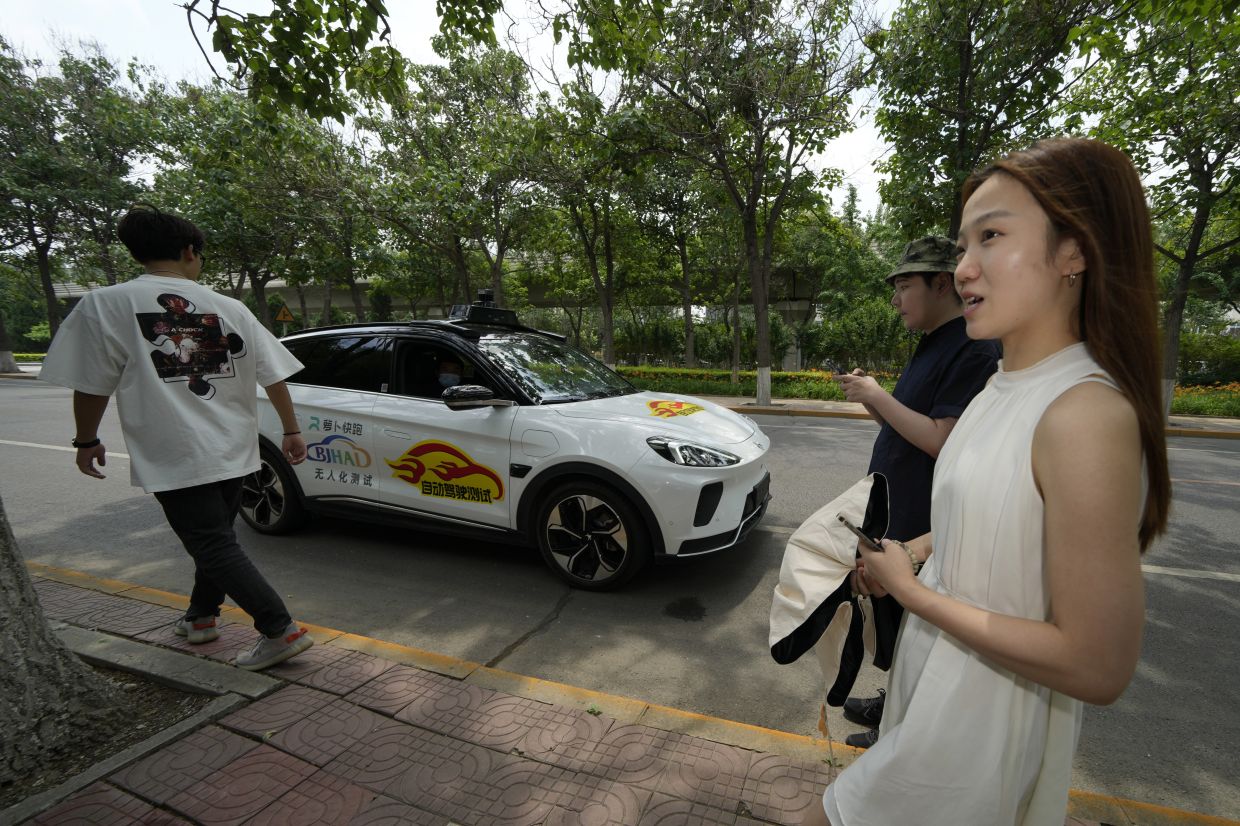 Workers prepare to catch a ride with a self-driving taxi developed by tech giant Baidu Inc in Beijing. — AP

Other developers include Deeproute.ai and AutoX in Shenzhen. Pony.ai, founded in 2016 and backed by venture capital, is road-testing autonomous cars and semi-trailer trucks.

Industry plans are “very aggressive to deliver the robo-taxi to the consumer”, said Owen Chen of S&P Global Mobility.

The ruling party is promoting automation to shore up economic growth by making its shrinking, aging workforce more productive. China’s working-age population has fallen by 5% since its 2011 peak and is forecast to slide further.

“People are very expensive,” said Wei. “Once this public service no longer needs people, the cost can drop rapidly.”

As for whether China can lead the global industry, “it’s a race at the moment,” said Pete Kelly, managing director of the automotive division of GlobalData Plc.

“But they could easily do this, because of the way decisions are made and deployments happen in China,” Kelly said.

McKinsey & Co in 2019 estimated China’s potential market for self-driving taxis, buses, trucks and other equipment and software in the trillions of dollars.

The earliest products are unlikely to earn back their development costs but might be “loss leaders” to sell other services, said Kelly. 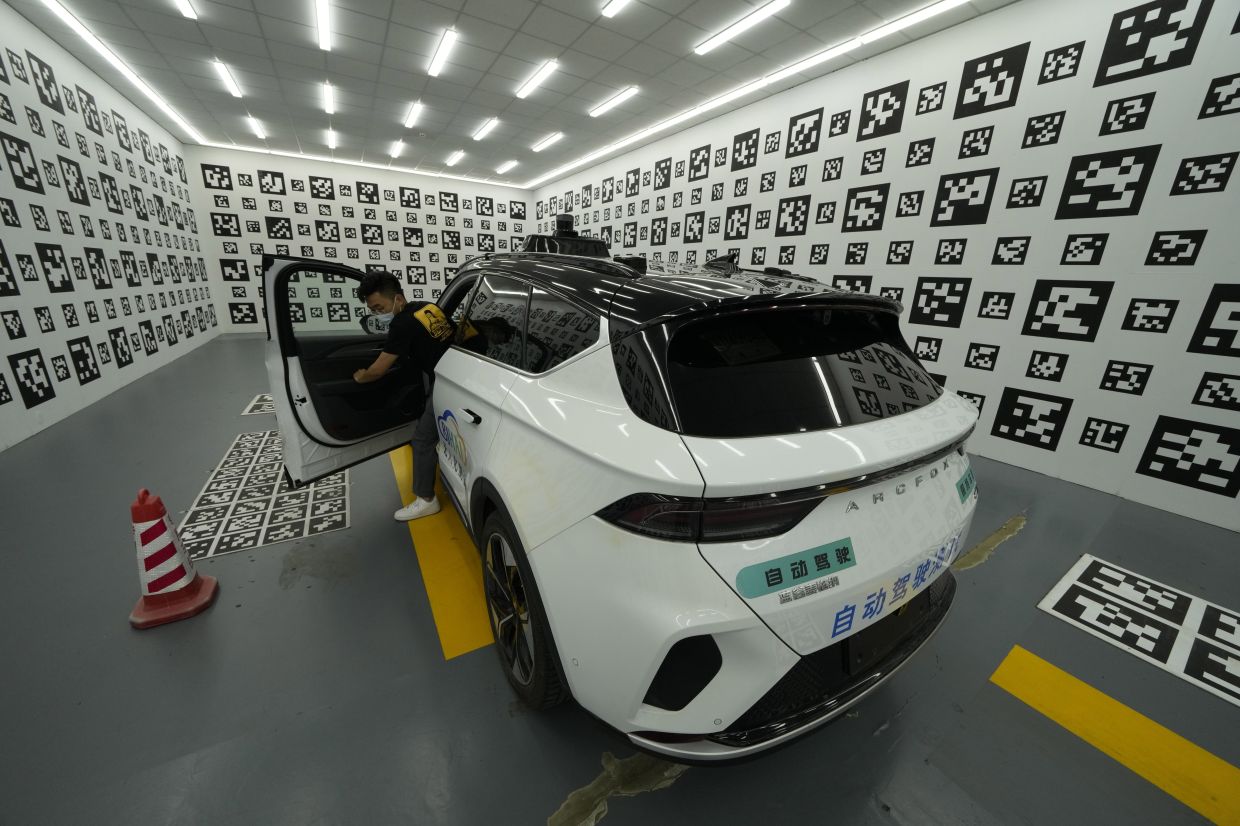 A driver leaves a car after parking it in a chamber used to calibrate the self-driving taxi developed by tech giant Baidu Inc on June 14, 2022, in Beijing. — AP

Baidu says it already is selling navigation and other technology to automakers. It projects total sales of 10bil yuan (RM6.56bil) based on agreements made so far, chairman Robin Li said in a May 26 conference call with reporters.

The company says it spent a total of 5.6bil yuan (RM3.67bil) on research and development last year but doesn’t disclose how much of that went into autonomous vehicles. Baidu reported a profit of 10.2bil yuan (RM6.68bil) last year on 124.5bil yuan (RM81.72bil) in revenue.

Baidu and its most advanced rivals have reached the industry’s Level 4 out of five possible levels of technology. That means their systems can operate without a driver but must be pre-loaded with a detailed map. That limits the area where they can operate.

Lower levels of technology range from cruise control, a feature available for decades, up to Level 3, which allows hands-free highway driving. Self-driving robot carts already are widely used in factories, warehouses and other tightly controlled settings.

Once self-driving taxis are on the road, operators must gather information about pedestrians and local conditions based on daily driving, a time-intensive process that will slow the technology’s rollout.

For a manoeuvre such as a U-turn, the Apollo system tracks as many as 200 vehicles, pedestrians and other potential obstacles as much as 100 meters (110 yards) away, according to Baidu. 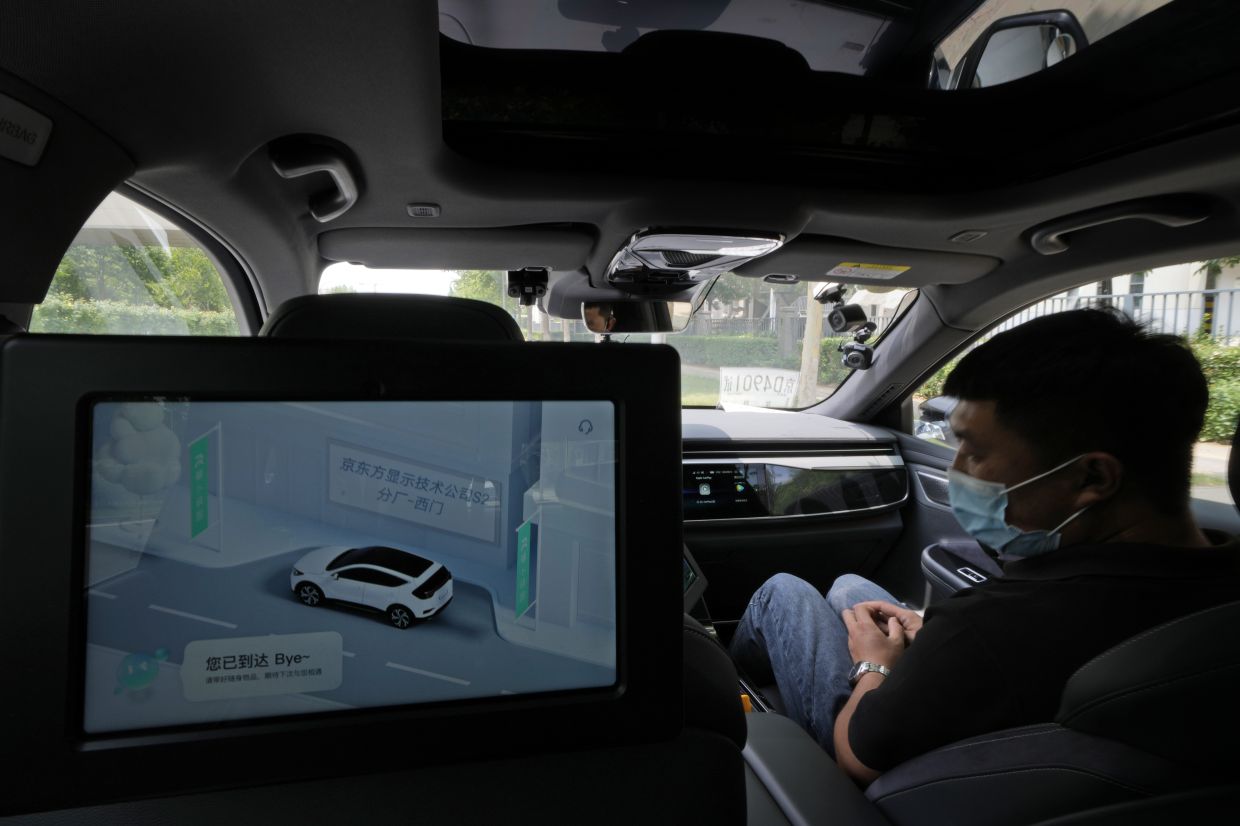 A screen provides a visualisation of the environment around the self-driving taxi developed by tech giant Baidu Inc in Beijing. — AP

Wei said Baidu would be happy to have foreign partners adapt its technology to their markets but has no export plans yet while it focuses on Chinese cities.

Intersections still are a challenge, Wei said. Pedestrians in China are used to drivers gradually making their way through crowds in a crosswalk while turning on a green light, but a robot car can’t do that.

“Our car always will yield to people and might wind up not getting through the light,” Wei said.

Baidu has launched its own self-driving car brand, JIDU, which unveiled a concept car this month and says it is aiming for a sticker price of 480,000 yuan (RM315,096).

The company also has deals with three Chinese electric vehicle brands to produce cars with computers, radar and light-based sensors built in instead of bolted onto the roof.

To encourage others to use Apollo, Baidu has made the platform open-source and says it has signed up 210 industry partners and 80,000 developers who might create products based on it.

Compared with a human driver, “the difference isn’t big,” said Zhang Zhihua, 29, an interior designer who uses driverless Baidu taxis in Yizhuang. “If you aren’t looking at the front and if you are playing on your mobile phone, then it feels exactly the same.” – AP 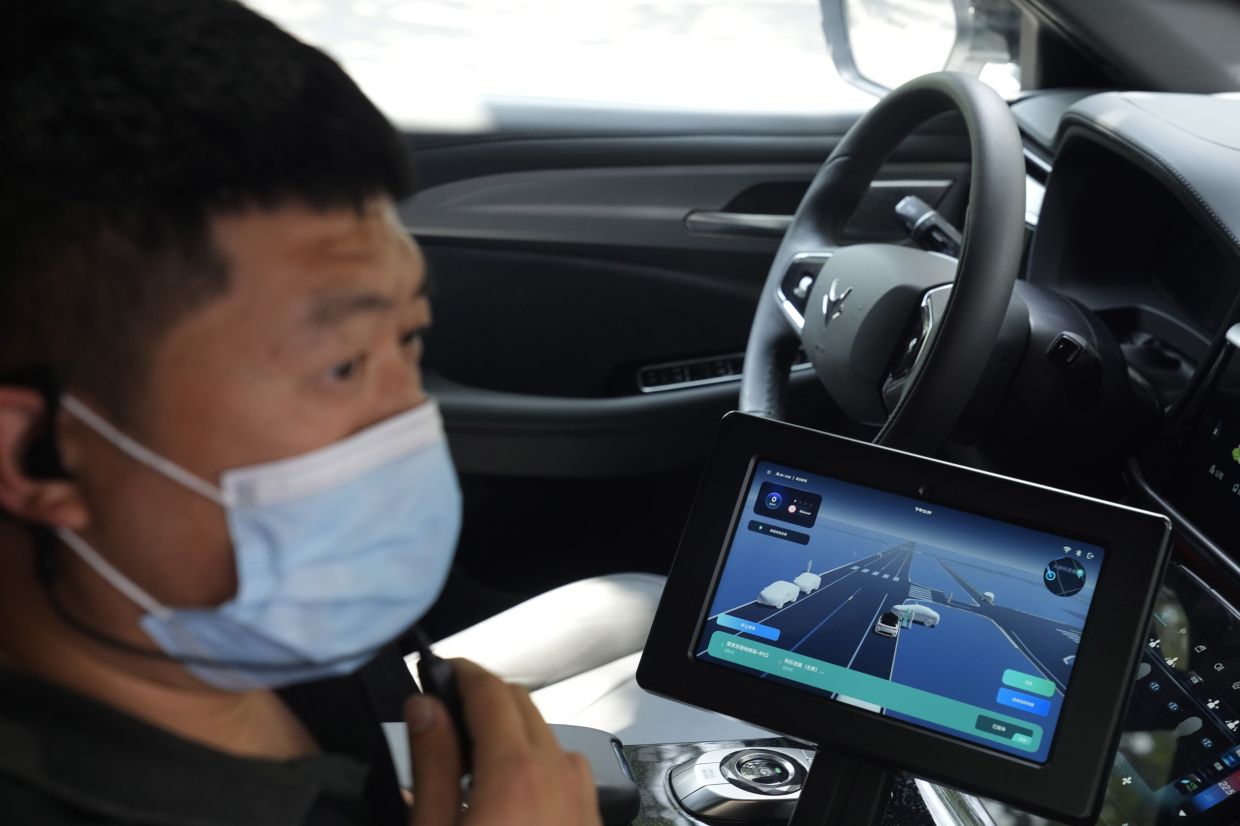 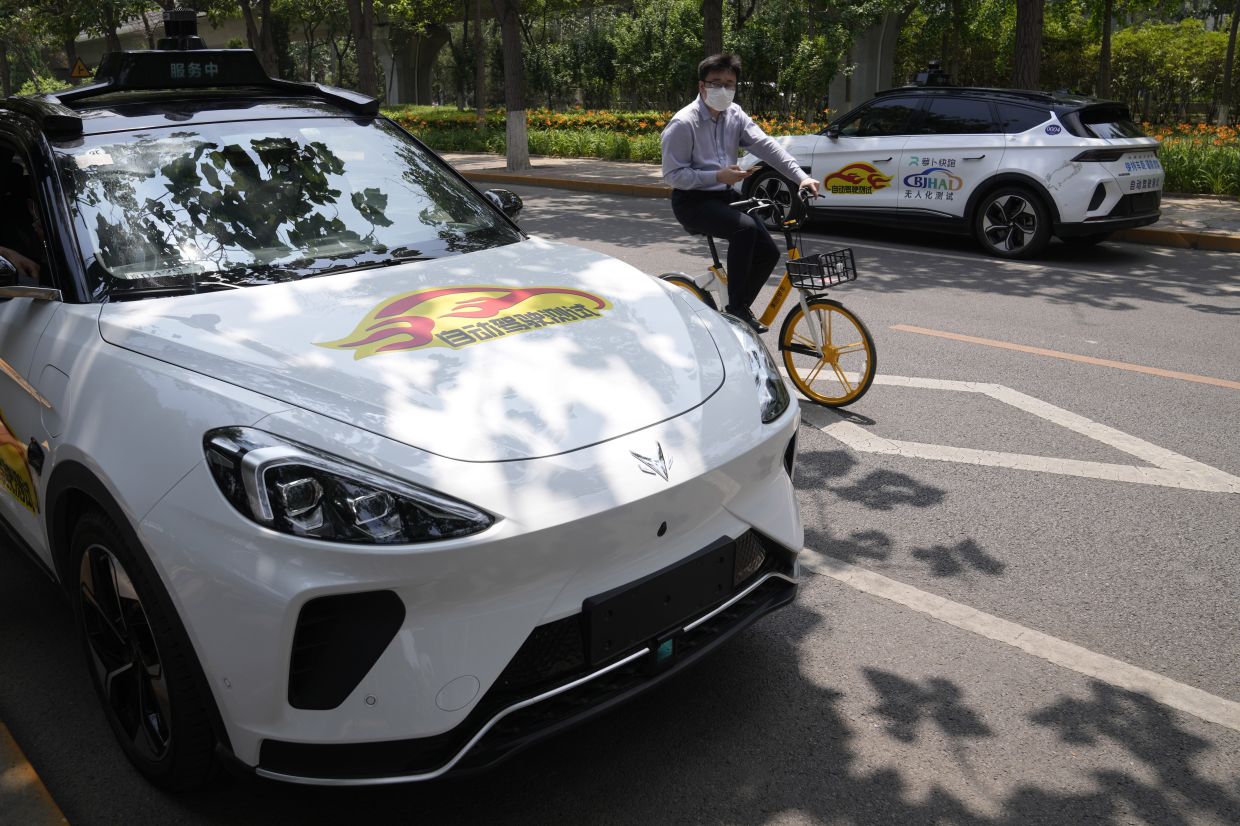 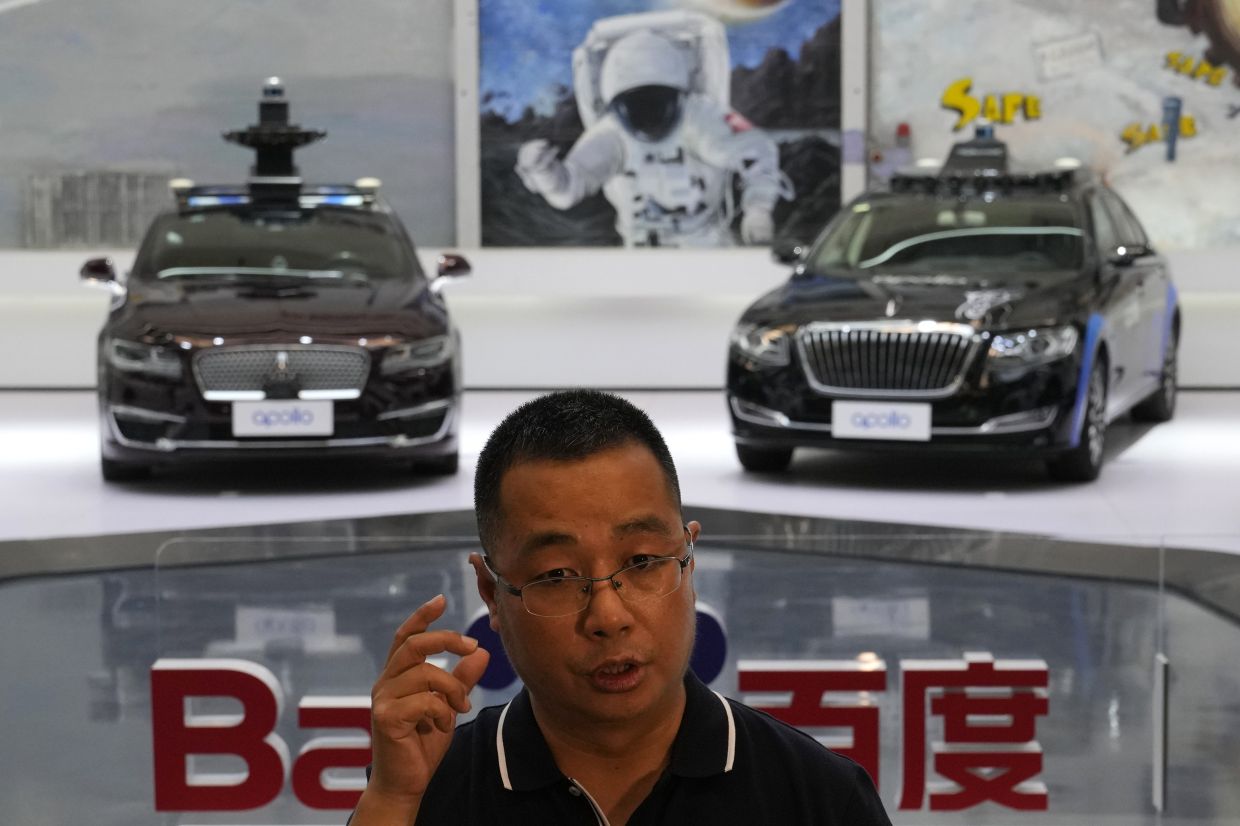 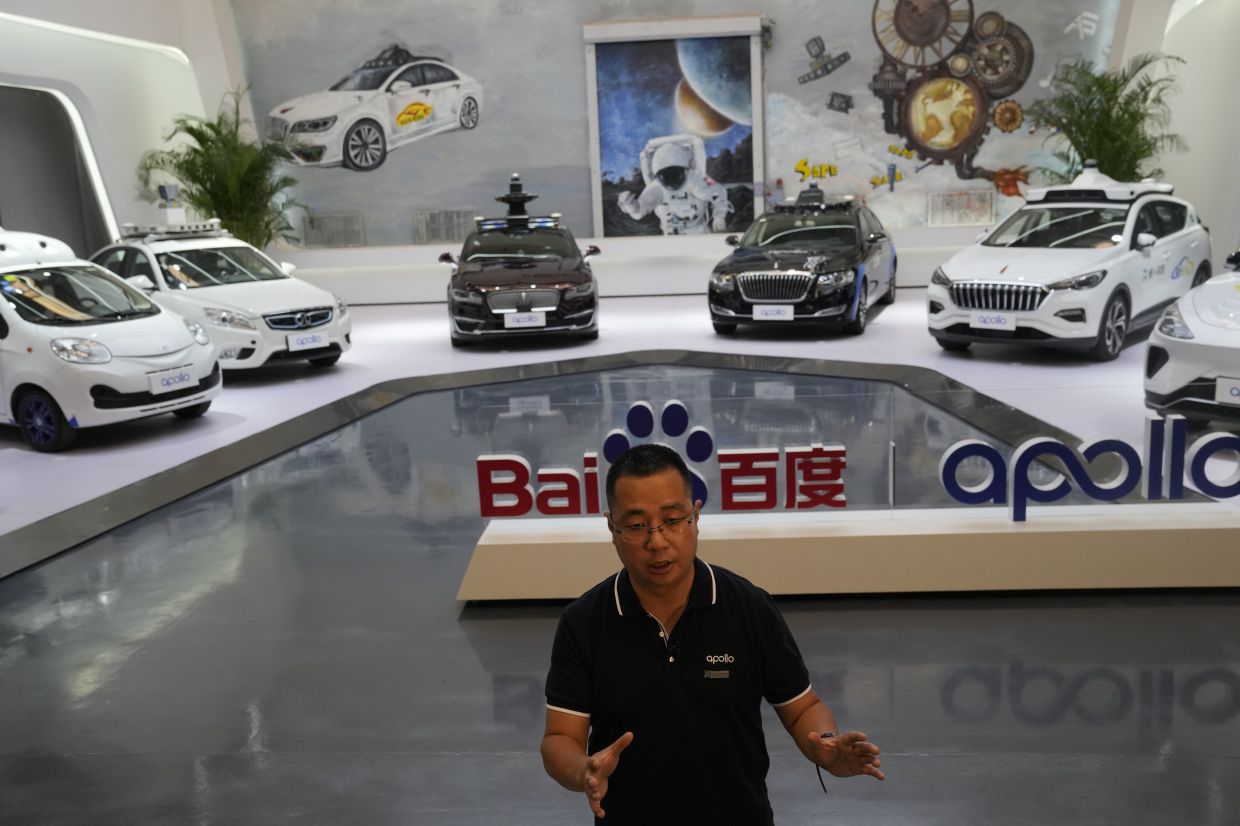 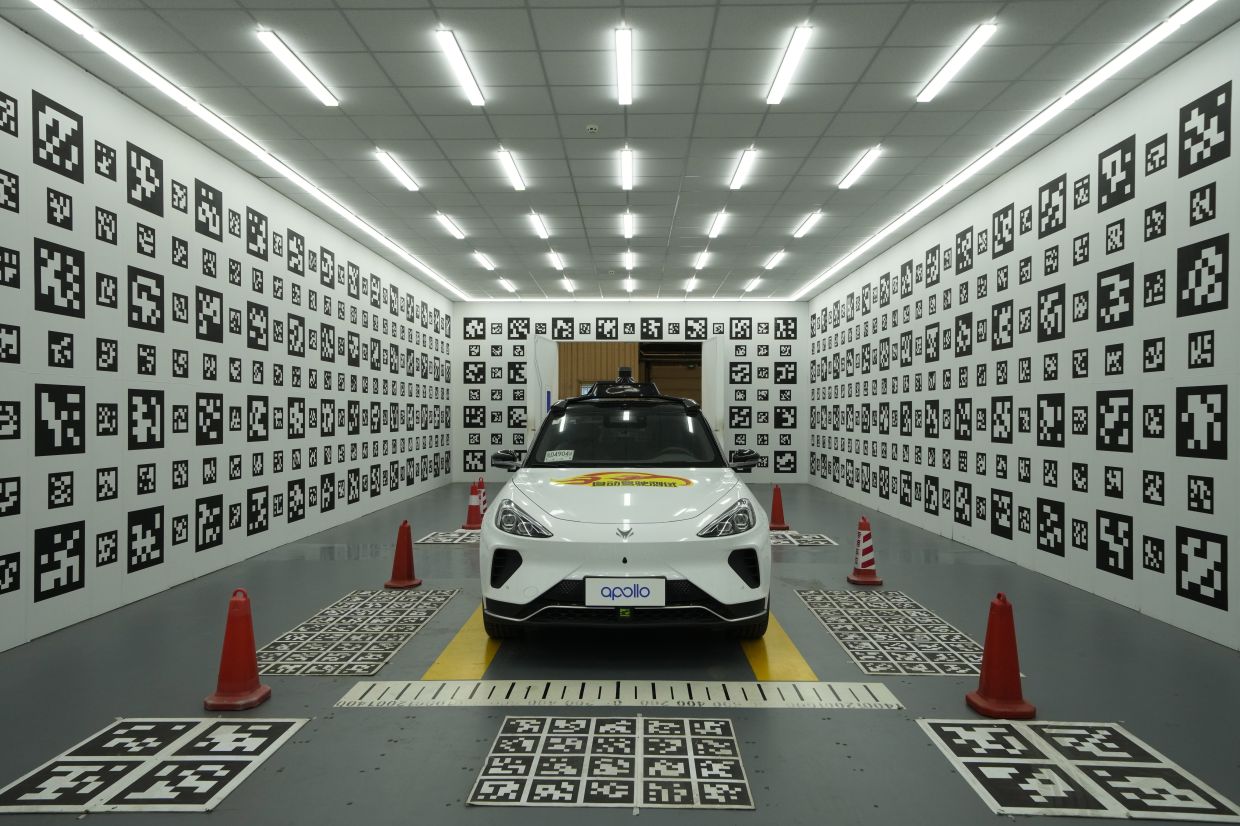 A screen provides a visualisation of the environment around the self-driving taxi developed by tech giant Baidu Inc in Beijing. — AP

A technician sits on the passenger side near a screen that displays the environment seen by a self-driving taxi developed by tech giant Baidu Inc on June 14, 2022, in Beijing. — AP

Workers prepare to catch a ride with a self-driving taxi developed by tech giant Baidu Inc in Beijing. — AP

A man on a bicycle rides past self-driving taxis developed by tech giant Baidu Inc on June 14, 2022, in Beijing. — AP

A driver leaves a car after parking it in a chamber used to calibrate the self-driving taxi developed by tech giant Baidu Inc on June 14, 2022, in Beijing. — AP

A self-driving taxi developed by tech giant Baidu Inc is seen in a chamber used to calibrate its sensors, on June 14, 2022, in Beijing. — AP

Baidu’s self-driving car business has gone seven years without making money; it says it’s ready to stick with it for seven more