A woman leads a child sitting on a scooter out of the Forbidden City in Beijing on June 7, 2022. The mother in the viral video said she couldn’t afford childcare for her two-year-old-son. — AFP

A short video featured on China’s Twitter-like platform Weibo has gone viral showing a young boy locked in a cage by his mother while she works.

In the 12-second clip, the boy is reaching through the grilles of the cage out to the person filming him. The anonymous mother told the Chinese news outlet Wanxiang News she has no choice but to bring her son to work with her. He’s two years old, Insider reported.

The mother said she couldn’t afford childcare for her two-year-old-son. Nevertheless, she must bring him with her as she works eight-hour days.

“We don’t have money,” the mother told Xi’an Broadcast. “Every time it comes to the time to buy milk powder, we don’t have cash. We eat one meal, and there’s no money left for the next.”

Though she works eight hours, her son isn’t caged for the entire time, she said. “I try to let him out when there aren’t customers around. I know my child is suffering so much,” she added via Xi’an Broadcast. – pennlive.com/Tribune News Service 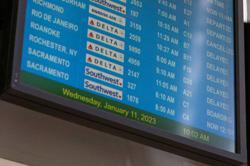