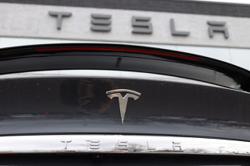 As recently as September, Spiegel was worth US$15.3bil (RM67.19bil) and ranked among the 140 richest people in the world, according to the Bloomberg index. — dpa

Like the disappearing “snaps” that users post on its social-media app, Snap Inc’s Evan Spiegel and Bobby Murphy just saw a big chunk of their fortunes vanish.

Shares of Snap tumbled 41% in New York trading on May 24 – its biggest intraday decline ever – after the company cut revenue and profit forecasts, slashing the wealth of its two co-founders as well as other billionaire social media owners.

Spiegel, 31, who is chief executive officer, saw US$1.4bil (RM6.14bil) or 30% of his fortune disappear, while chief technology officer Murphy dropped US$1.8bil (RM7.90bil) or 36%. They are among the largest wealth declines of any US billionaires by percentage this year, according to the Bloomberg Billionaires Index.

It wasn’t just Snap’s billionaires who took a hit. Shares of Facebook owner Meta Platforms Inc fell as much as 10%, shaving 8% or US$5.7bil (RM25.03bil) off the fortune of CEO Mark Zuckerberg.

The losses add to a string of precipitous declines for some of America’s wealthiest entrepreneurs amid a rout in tech stocks. Netflix Inc’s Reed Hastings’s wealth has fallen by 53% since the start of the year, one of the largest drops among US tech billionaires.

As recently as September, Spiegel was worth US$15.3bil (RM67.19bil) and ranked among the 140 richest people in the world, according to the Bloomberg index. He and his wife, supermodel Miranda Kerr, recently used part of their fortune to forgive the college debt of graduates of the Otis College of Art and Design in Los Angeles.

Spiegel owns slightly more than 10% of the Santa Monica, California-based social media company, which he created with Murphy in 2011 while he was a student at Stanford University. Their Snapchat app took off for what was then a relatively novel feature: the ability to post “snaps” containing photos or videos that would quickly disappear.

Spiegel has sold more than US$1.6bil (RM7.02bil) worth of Snap shares since the company went public in 2017, while Murphy has unloaded about US$640mil (RM2.81bil) worth, according to data compiled by Bloomberg. – Bloomberg