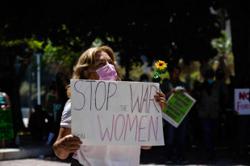 Ryan said the tech companies could consider solutions like applying more consistent fact-check labels on formula misinformation, or setting up a resource pointing parents to factual information about the formula shortage, the way they have sought to redirect users from potential Covid-19 misinformation with links to reputable sources. — AFP via Getty Images/TNS

As a nationwide baby formula shortage sends parents into crisis mode, social media posts containing dangerous misinformation about homemade formula recipes have gone viral online, racking up views in the millions. Although major networks like Facebook, TikTok and YouTube have taken steps to label photos, videos and posts with contextual information pointing to the harms of such recipes, and in some cases removed them, they have done so inconsistently, allowing the advice to continue spreading and putting children at risk.

“Platforms still haven’t learned the lesson that their obsession with engagement is leading them to recommend wildly unsafe content,” said Laura Edelson, a computer scientist studying misinformation at New York University. “The fact that they still have not fixed this issue after years of very clear evidence that their algorithms are promoting dangerous content is shocking.”

Scant availability of formula has been a problem for months because of supply chain disruptions that have affected consumers across major industries, from autos to appliances. But after Abbott Laboratories’ nutrition unit recalled some of its products earlier this year, including its top-selling brand Similac, stockpiles were further depleted, leading parents to try anything — driving for hours to stores that might have stock, or bartering in Facebook groups — to get their babies fed. On Wednesday, President Joe Biden took urgent action to address the crisis, invoking the Defense Production Act to increase production and instructing Defense Department planes to speed formula shipments into the country from overseas.

Parents are turning to the Internet for solutions and alternatives, but medical experts agree that homemade versions of baby formula come with serious health risks. “We’ve all seen over the last couple of years that fear and uncertainty create an ideal environment for misinformation to go viral,” Edelson said.

Both the Food and Drug Administration and the American Academy of Pediatrics issued warnings stating that parents shouldn’t make their own infant formula because of the dangers associated with a lack of nutrients in them. In its advisory, the FDA added that it had received reports of hospitalised infants suffering from low calcium from the homemade recipes. On May 16, a doctor at Le Bonheur Children’s Hospital in Memphis, Tennessee, said he was treating two young patients—a toddler and a preschooler—because they didn’t have access to the specialty formula they needed.

Both YouTube and TikTok said they removed videos Bloomberg flagged. YouTube said content that “promotes, sells or provides instructions for homemade baby formula” is in violation of its harmful and dangerous content policies. TikTok said it would continue looking for similar problematic content. Twitter, when shown examples by Bloomberg, said they didn't violate its misinformation policies, which apply to manipulated media, elections, Covid-19 and crises, such as the Buffalo shooting. Twitter said it would re-examine its approach as the public conversation evolves.

Meta Inc, which owns Facebook and Instagram, said it partners with a network of third-party fact checkers who rated claims about the baby formula shortage. Once posts have been fact checked, they appear with warning labels in Facebook's feed and fewer people see them, a Meta spokesperson said. The company did not respond to questions about its inconsistent labelling on the homemade baby formula posts.

The platforms did host many communities sharing information about where to find baby formula, including crowdsourced maps about which grocery stores had products in stock. Bringing people together to strategise around the problem and get emotional support comes with the tradeoff of making it easy for bad advice to travel, said Melissa Ryan, chief executive officer of Card Strategies, a consulting firm that researches disinformation.

“Parents are using online forums, particularly local groups, to source formula for their babies, and it’s been an amazing resource,” Ryan said. “But misinformation about the shortage is also everywhere. Everything from fake homemade formula recipes to conspiracies about what caused the shortage.”

Ryan said the tech companies could consider solutions like applying more consistent fact-check labels on formula misinformation, or setting up a resource pointing parents to factual information about the formula shortage, the way they have sought to redirect users from potential Covid-19 misinformation with links to reputable sources.

Steven Abrams, a paediatrician at the University of Texas in Austin, said the lack of absorbable nutrients in homemade formula poses a risk of seizures in infants, and inadequate iron risks anaemia and developmental delays. Improper preparation is also a danger, he said. “Contamination either in the foods or from the preparation exposes infants to risks of serious bacteria, including salmonella,” Abrams said.

But the warnings didn’t stop social media users from discussing and sharing the unproven recipes online. In the first week of May, there were just a couple hundred posts discussing homemade baby formula on Twitter, according to an analysis by Bloomberg News. The next week, that number jumped to almost 5,000 tweets — a 2,100% increase. “If you are affected by this, don’t panic,” said one tweet. “Millions of us grew up on homemade formula... your baby will be fed and happy and probably have fewer tummy upsets.”

On Facebook, posts sharing a photo for a 1960s recipe for homemade baby formula as a workaround to the shortage were by far the most viral on the platform. Posts containing the recipe photo were shared in hundreds of Facebook groups with names like “Country Girl’s Dream Spaces” and “Mommy Talk Madness,” generating 95,899 interactions in the past year, according to an analysis on CrowdTangle, a social media web tool owned by Facebook parent Meta Platforms Inc. Though not everyone in the Facebook groups liked or shared the posts, the DIY recipe may have reached as many as 12.5 million people, the analysis showed.

On some of the posts, Facebook applied a label saying the information listed could mislead people. But on others, including one that collected nearly 1,000 likes and shares, the label wasn’t applied. The company appeared to be labelling posts inconsistently “based on very basic text patterns, such as ‘formula recipe,’” said Edelson, the misinformation researcher.

The recipe was also shared widely on Meta’s Instagram photo-sharing app, generating hundreds of likes and shares. Similar to Facebook, many of the Instagram posts didn’t carry the misleading label.

On Google’s YouTube, dozens of videos sharing DIY baby formula recipes were hosted on the video site and shared across other platforms, including Twitter and Facebook, collecting hundreds of likes and shares. The most popular videos had tens of thousands of views and included ads, appearing after a simple search string—“homemade baby formula”—despite YouTube’s promises that it doesn’t allow or promote content containing health misinformation on search and recommendations on the site. YouTube removed some videos from its site, but only after Bloomberg News reached out.

The same simple search on ByteDance Ltd’s TikTok app brought up just as many results, but the videos were even more viral on the platform. Half a dozen of the most popular search results containing untested formula concoctions saw at least 1.5 million views on the platform, according to a review by Bloomberg News. After Bloomberg reached out for comment, TikTok removed results for “homemade baby formula” and added a notification for users that some of the posts that would have appeared are in violation of community guidelines.

Many of the instructions shared online were based on a homemade recipe from the Weston Price Foundation, a nonprofit based in Washington, DC, that has also advanced false claims about vaccines, cholesterol and Covid-19. “A better, healthier homemade baby formula recipe,” tweeted Darla Shine, the wife of former President Donald Trump’s onetime communications director, attaching a link to the group’s recipe. “Please pass around.” Her tweet collected 150 likes and shares. The link was shared hundreds more times on Twitter, a CrowdTangle analysis showed. On Facebook, the same link was shared hundreds of times, generating 23,600 likes and shares on the platform. It collected 2,400 more interactions on Instagram. Shine did not respond to a request for comment.

Abrams, the paediatrician, said he was “very familiar” with the group’s formulations and considered them “risky.” Others had even stronger views.

“Oh man, these are completely dangerous,” said Mark Corkins, a paediatric gastroenterologist who treated the two young patients hospitalised in Memphis, when asked to review several other recipes that went viral on social media, many of them based on Weston Price’s original recipe. “Two of them start with raw milk. That is unpasteurized. Louis Pasteur invented pasteurisation because cow’s milk contained infectious agents that were eliminated by the process.”

“These are not going to be complete nutrition and have a very high risk of exposing your infant to infections you don’t want them to have,” he said.

Sally Fallon Morell, the president of the Weston A. Price Foundation, stood by her advice on raw milk formulas in a phone conversation, claiming "it gives the baby immunity for life against any pathogen in the raw milk." The Centers for Disease Control and Prevention has stated that raw milk can carry harmful bacteria and other germs that can kill people. In about half of states, the sale of raw milk to consumers is illegal.

For parents looking to help feed their babies, the American Academy of Paediatrics recommends checking smaller stores and local pharmacies for baby formula, or looking online for well-recognised distributors for supplies. Paediatricians may also be able to connect low-income families to the US Department of Agriculture's special supplement nutrition program, which provides federal grants for food, including baby formula, to qualified individuals, the group said.

The formula shortage underscores the issue tech companies have with short-lived surges in misinformation that their artificial intelligence systems aren’t trained to address. Despite Biden’s action, companies are warning that the shortages could affect consumers for months. Shelves were 45% out of stock the week ending May 15, according to Datasembly.

“This is a public health crisis,” said Ryan, the misinformation researcher. “But the tech companies aren't treating it like one at all.” – Bloomberg News/Tribune News Service

After TikTok video on fake branded purse at US vintage store goes viral, the owners fear for their safety