By Cecilia D'Anastasio and Jason Schreier Activision management had refused to recognise a union formed by 28 video game testers, saying that the unit comprised only a fraction of Raven’s staff. — Reuters

Video game testers at Activision Blizzard Inc voted on Monday to form a union with the Communications Workers of America in a first for a US-listed game company.

Nineteen quality assurance testers at subsidiary Raven Software, who assess the performance of games in the lucrative Call Of Duty series, voted for legal recognition of the union they’d first organised in January. Three voted against.

The outcome ends a protracted battle that began when management refused voluntarily to recognise the group. Workers came together in response to layoffs at the company last December, and their push for official status at the company comes as it’s also battling explosive allegations of sexism.

"Our biggest hope is that our union serves as inspiration for the growing movement of workers organising at video game studios to create better games and build workplaces that reflect our values and empower all of us,” the newly created union, the Game Workers Alliance, said in a statement. "We look forward to working with management to positively shape our working conditions and the future of Activision Blizzard through a strong union contract.”

Microsoft Corp plans to buy Activision for US$69bil (RM303.05bil), and the deal is expected to be completed by June 2023 pending regulatory approval. Labour experts say other groups within Activision that are looking to follow Raven’s lead may face a much tougher foe if the purchase goes through.

Activision management had refused to recognise the union saying that the unit, which consists of 28 testers, comprised only a fraction of Raven’s staff. After a court battle, the National Labor Relations Board decided that the effort could move ahead.

The vote came the same day US labour board prosecutors determined that Activision illegally threatened staff and enforced a social media policy that conflicts with workers’ collective action rights. The NLRB said it will issue a complaint unless the company settles.

In recent weeks, Activision management pushed hard against the union effort, encouraging employees to vote against the union, according to documentation seen by Bloomberg. “Having a union at Raven could fundamentally alter the way Raven works in ways that can have a significant, negative impact for the studio and for individual Raven employees,” company management wrote in an internal Q&A. The company also linked to a Bloomberg Law article about how long it can take for a union to negotiate its first contract.

In a series of videos sent to Raven staff and reviewed by Bloomberg, management at Activision and Raven listed bullet-points such as "A union can’t guarantee a pay increase” and "Union contracts often put an end to flexible scheduling”.

"We respect and believe in the right of all employees to decide whether or not to support or vote for a union,” a spokesperson for Activision said. "We believe that an important decision that will impact the entire Raven Software studio of roughly 350 people should not be made by 19 Raven employees.”

This will be the first union at a listed video game company in North America, where some top game studios have been accused of fostering cultures of sexism and overwork. The 13-person independent game studio Vodeo Games formed the first US-based video game union last year.

Recently, the US has experienced a unionisation wave across tech and other industries. Just this year, workers at Starbucks and Trader Joe’s have announced unionisation pushes. – Bloomberg 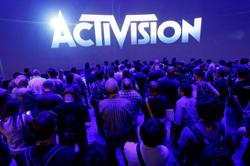