Azmin (second, left) talking with SpaceX’s commercial sales director Andrew Matlock (left) after having a meeting with SpaceX in Los Angeles early on May 18. — Bernama

“So far, the government has scrutinised some of the proposals submitted by Starlink.

“Starlink representatives will be in Malaysia next week to scrutinise these proposals, and we hope this can be finalised in the near future as they are ready to come to Malaysia, bringing these new technologies that would benefit the country’s economy,” he said.

Azmin was speaking to Bernama and TV3 journalists after meeting with representatives of SpaceX and Starlink at the SpaceX headquarters here, Wednesday (Thursday in Malaysia).

He said currently, there was already a Johor-based Malaysian company, which was a major manufacturer for essential components for the satellites built by Starlink.

“Their (SpaceX and Starlink) intention is to see (if) this supply chain can be expanded among local companies, because with this new investment, they definitely need the support of a wider supply chain.

“And this will provide an opportunity for Malaysian companies to get involved in space technology in the near future,” he said.

Starlink’s presence is important for Malaysia in facilitating its digital transformation agenda, he said. “I believe that with Starlink’s presence in Malaysia, it will be able to further strengthen Malaysia’s economic position in South-East Asia and globally,” he added.

“The companies see the potential in Malaysia, and the government is currently facilitating the process to realise their proposed project in the country,” he told Bernama.

Besides meeting with SpaceX dan Starlink, Azmin also had a meeting with Cue Health Inc, a healthcare technology company that develops portable diagnostic tests for at-home use.

Azmin said the company had introduced a medical device specifically to perform a range of tests, including for Covid-19, using pioneering technology.

“They have identified several suitable sites for this investment, and they will be in Malaysia in June to finalise a suitable place for the investment in Malaysia,” he said. – Bernama 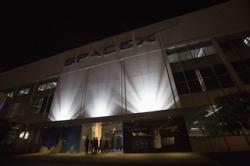