BARCELONA: Phone makers and telecoms firms unveiled a series of gadgets and innovations at one of the industry’s biggest get-togethers this week in Barcelona.

Here is a selection of the most curious objects from the Mobile World Congress.

It shakes a mean cocktail, speaks a dozen languages and recognises its most loyal customers by their faces.

Joan Laporta, president of Barcelona football club, was among the robot's customers at the tech gathering this week.

The 5G-enabled humanoid robot can "work 24 hours a day", according to its manufacturer.

In these Covid-affected times, the robot has another advantage over its human competitors – it avoids "unnecessary contact" and reduces the risks of contamination, the company says.

No queueing around the block to get in, no security guards at the entrance – just a virtual reality headset and a booming soundtrack.

On the stand of the South Korean operator SK Telecom, visitors had a lively taste of the metaverse,the immersive version of the internet touted as the centrepiece of the next online generation.

With joysticks in hand, the virtual clubber is plunged into a giant disco ball to dance among other avatars.

This is one of many applications in "Ifland", the operator's very own metaverse, which is designed to "maximise the user experience across various virtual spaces and avatars".

Ever wondered what it would be like to drive a car while sitting more than 1,000 kilometres from the steering wheel?

French operator Orange is proposing it as one use of the next-generation 5G internet.

Called "Vrombr", this mobile game created by the young start-up Polyptik allows you to drive real miniature cars via a smartphone.

In the demonstration at the Mobile World Congress, the driver was in Barcelona while the vehicle raced around a track near Paris.

Several manufacturers claimed to have developed the fastest smartphone chargers in the world.

China's Realme unveiled a 150-watt charging system for its forthcoming GT Neo 3, which will allow it to recharge its battery to 50 percent in five minutes.

Its competitor Oppo has promised a 100 percent charge in nine minutes thanks to its "Supervooc" 240-watt technology.

Meanwhile, Japanese start-up PJP Eye has unveiled a prototype of an "organic" battery using carbon made from cotton instead of the metals usually used for this type of product.

This technology "allows our batteries to have a long lifespan" and reduces their CO2 emissions, explains Inketsu Okina, the firm's director.

Low on its legs, its body full of sensors and microphones, the cyberdog can trot close to its owner, bark, hold up its paw and even stand guard.

The robot, shown for the first time outside of China by its creator Xiaomi, is controlled via a mobile phone. 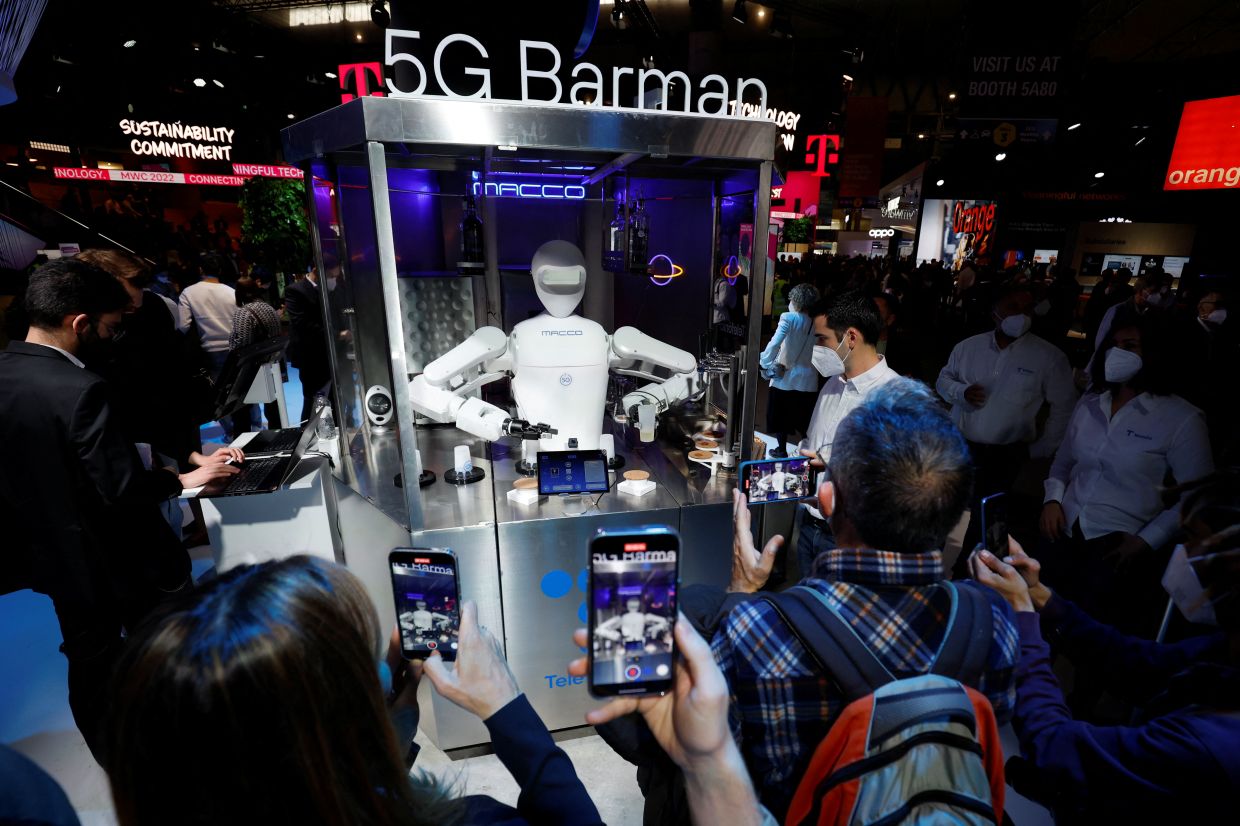 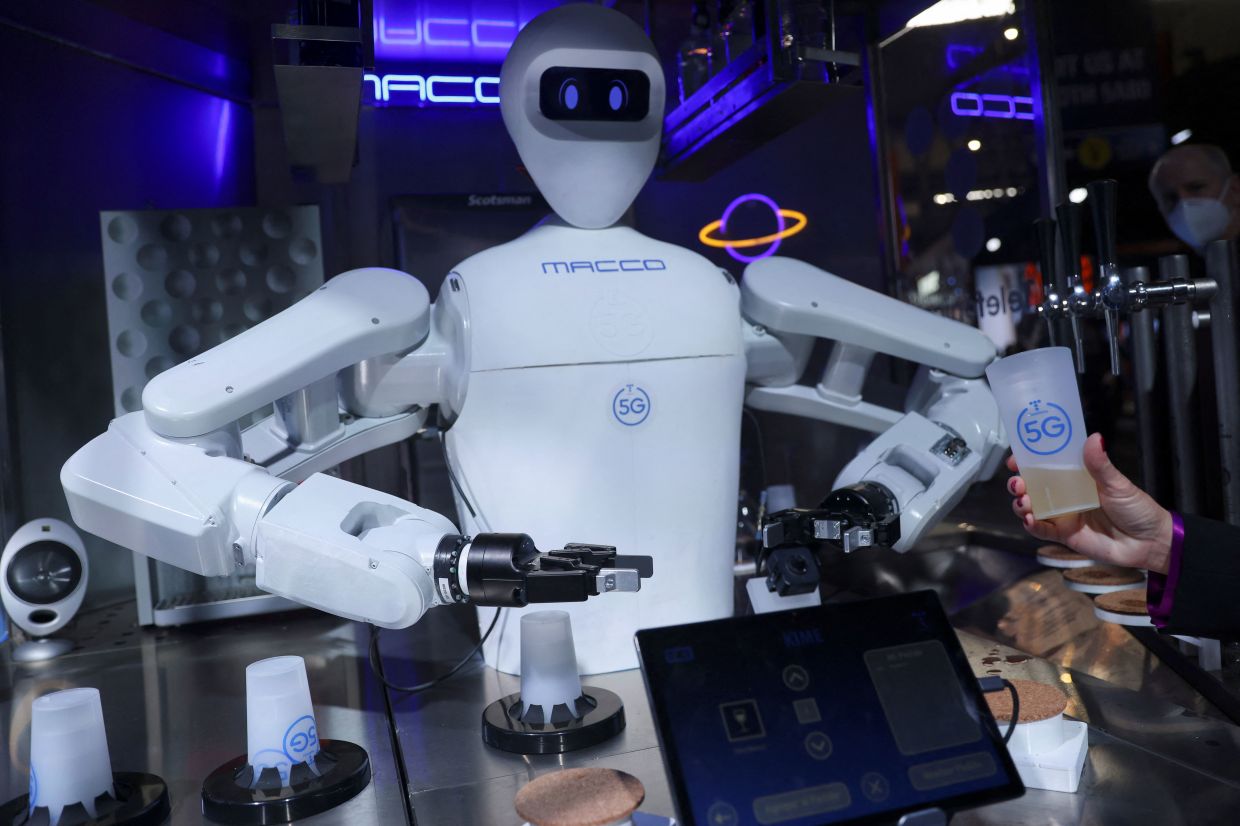 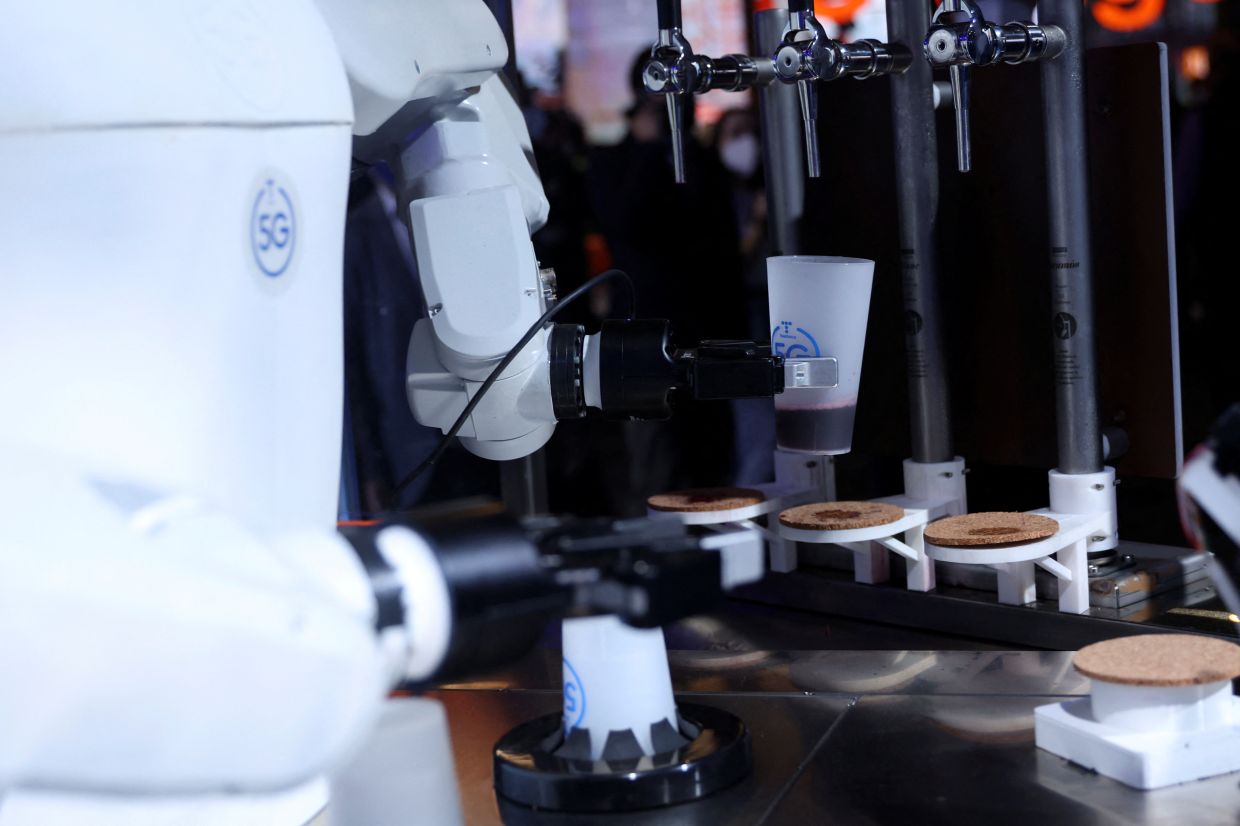 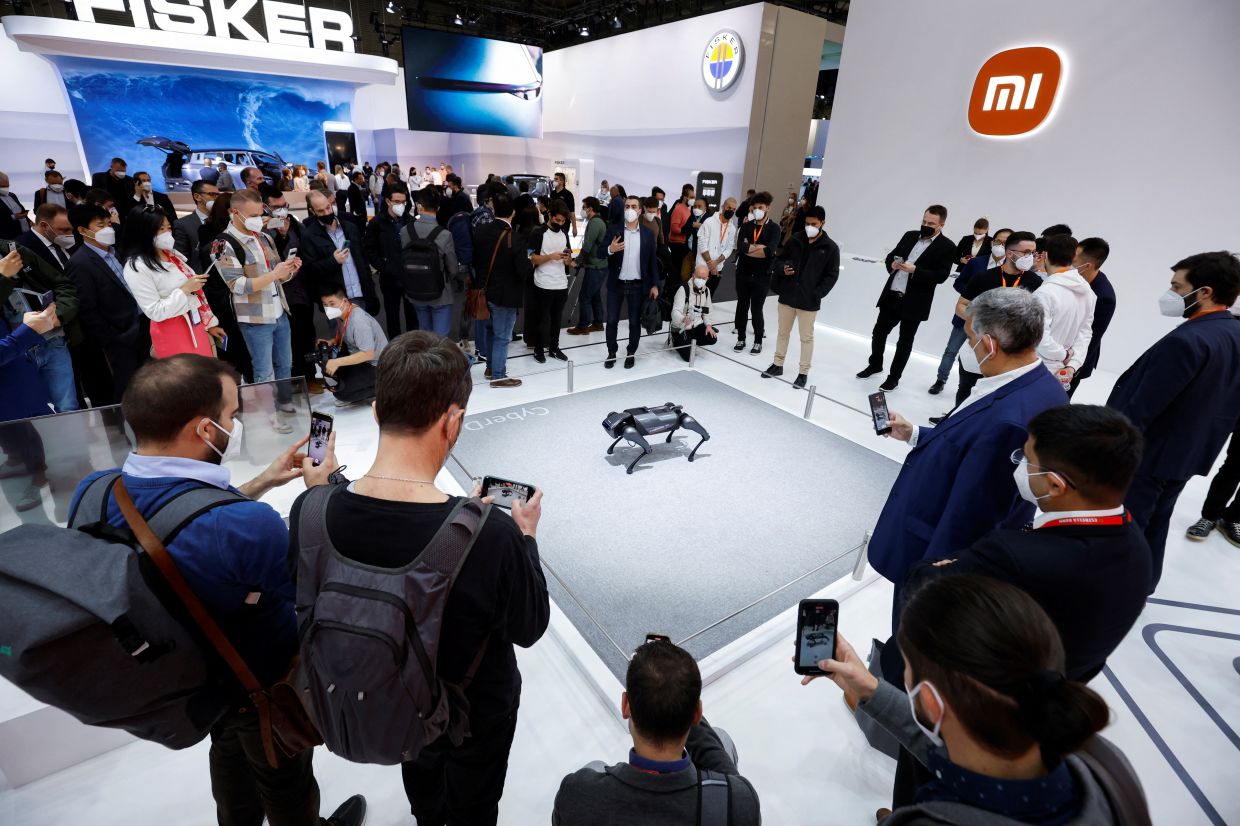 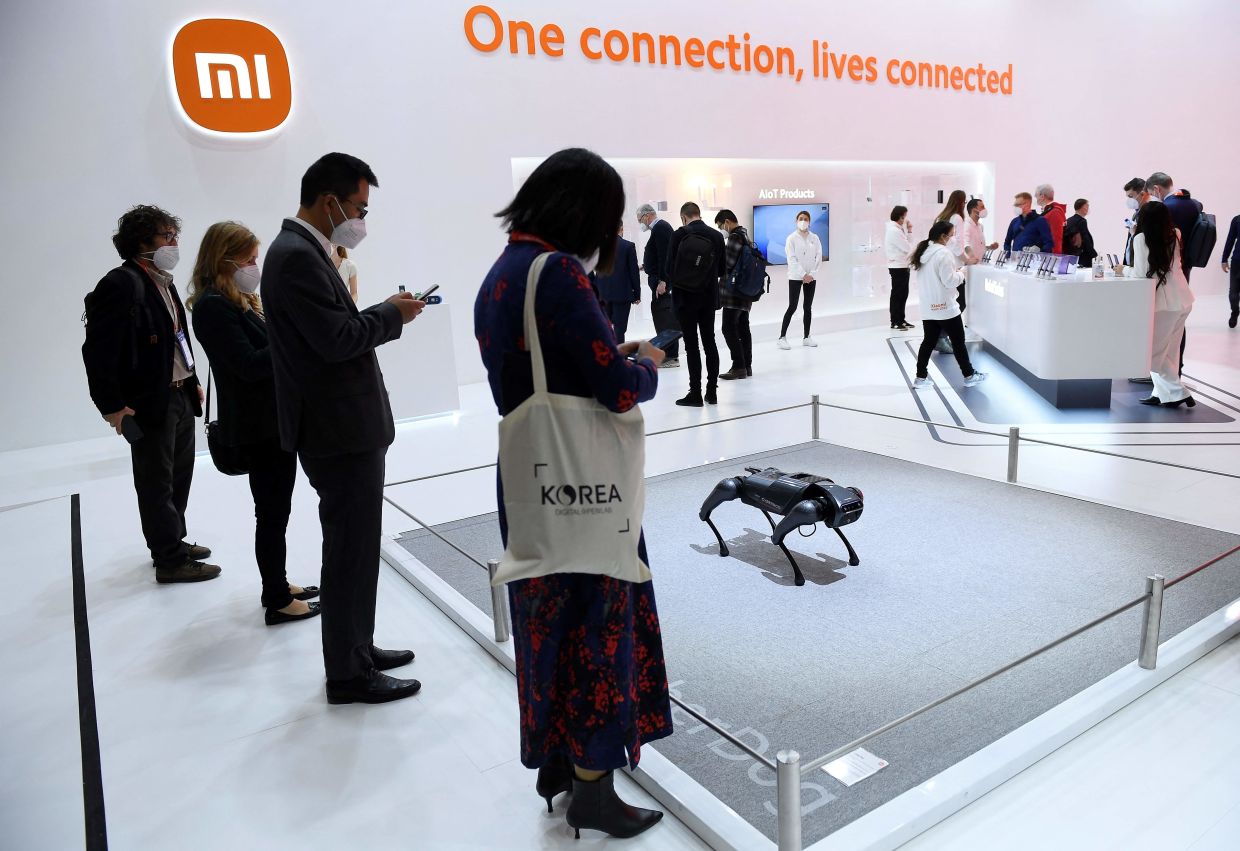 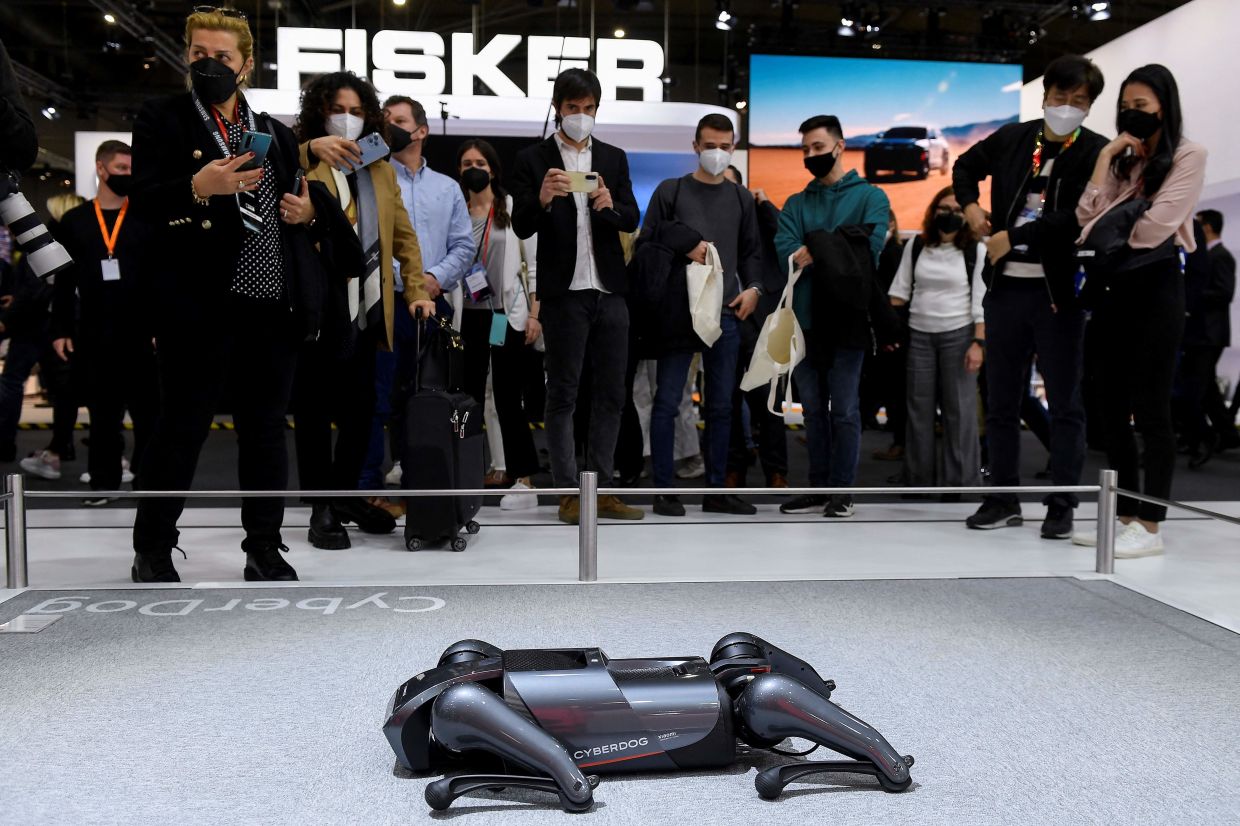 A robot ‘5G Bartender’ highlights the use of 5G and Edge Computing by providing a drink to a visitor, at Telefonica's stand during GSMA's 2022 Mobile World Congress (MWC), in Barcelona, Spain. — Reuters

A robot ‘5G Bartender’ highlights the use of 5G and Edge Computing by getting a drink for a visitor, at Telefonica's stand during GSMA's 2022 Mobile World Congress (MWC), in Barcelona, Spain. — Reuters

Visitors look at the Cyberdog robot on Xiaomi's stand on the opening day of the MWC (Mobile World Congress) in Barcelona on February 28, 2022. — AFP

Visitors look at the Cyberdog robot on Xiaomi's stand on the opening day of the MWC (Mobile World Congress) in Barcelona on February 28, 2022. — AFP

Progress on recycling smartphones, but more to do

Subscribe now to our Premium Plan for an ad-free and unlimited reading experience!
Robotics 5G Technology