LAS VEGAS: The CES tech show in Las Vegas closed its 2022 edition on Jan 7, after pushing ahead with a significantly downsized gathering despite surging Covid cases.

Industry behemoths like Amazon and Google stayed away over the virus risk, but the more than 2,200 firms big and small in attendance still pitched their hopes for the next big thing.

Here are some parting highlights from the show:

French startup Wisear is working on technology that detects the signals that zip between the brain and certain muscles, in order to use them to operate connected devices.

“Over the past 30 years we have significantly improved the digital power around us but we still use the same tools – keyboards, mouses, touchscreens” to interact with machines, said Wisear co-founder Yacine Achiakh.

“Voice control is coming, but it’s slow, and it doesn’t always work. So we want to create an interface that is inclusive and easy to use,” he added.

At this stage, his team has paired the system with earphones that can recognise the movements of their user’s jaw.

The user can pause the music playing on their cellphone and then restart it by moving their jaw in chewing-like motions.

The idea came to them by observing the progress of Neuralink, a firm that belongs to Tesla chief Elon Musk, and which is conceiving implants to be able to communicate with machines by thought.

“We figured it would be a shame to wait 50 years to have brain implants before allowing people to be able to have a much better way to interact with the digital world that surrounds us,” Achiakh noted.

His company intends to perfect its technology (and expand the range of actions) to sell to the tech industry’s giants.

They will be able to integrate it into headphones but also augmented reality glasses, allowing users to control the display without taking out their smartphone.

The Boston Dynamics robot dogs – the ones compared to the killer four-legged bot in a dystopian Black Mirror episode – are back and this time they are going to the metaverse.

Hyundai snapped up the robot maker last year, raising questions about what the South Korean automaker might be planning.

To the bright pop of South Korean boy band BTS, the yellow-bodied four-legged tech did a choreographed routine at Hyundai’s booth for a crowd recording every step on their phones.

But the performance also included an animation of a vision for using the robots as the eyes and ears on Mars for people who could then experience the Red Planet in the metaverse.

“The idea behind metamobility is that space, time and distance will all become irrelevant,” Chang Song, president of Hyundai Motor Group, said in a statement.

“By connecting robots to the metaverse, we will be able to move freely between both the real world and virtual reality.”

A ski on the front, a track on the back, handlebars, a padded seat and, most importantly, a battery: the MoonBikes are the first electric snowbike, according to the startup that makes them.

“It’s electric and quiet, so it doesn’t bother customers and it protects the environment,” said Nicolas Muron, founder of the French company.

His idea was to make this type of vehicle more attractive and accessible.

“Eighty eight percent of snowmobile users are men, with an average age of 46. So they are not for everyone. I wanted to make a machine that was easy to use,” Muron said, adding the machines feel a bit like skiing.

Spoiler alert: It’s a boat that sails itself.

“By applying autonomous navigating technology to leisure boats, users can greatly reduce the time required for berthing and docking as well as the risk of accidents during operation,” said Do-Hyeong Lim, the boss of the Hyundai Heavy Industries subsidiary Avikus that designed the navigation technology.

The boat in 2021 made a 10-kilometer (six-mile) trip with 12 passengers on board in South Korea, and Hyundai has announced preparations for a large merchant ship to sail with this same technology. – AFP 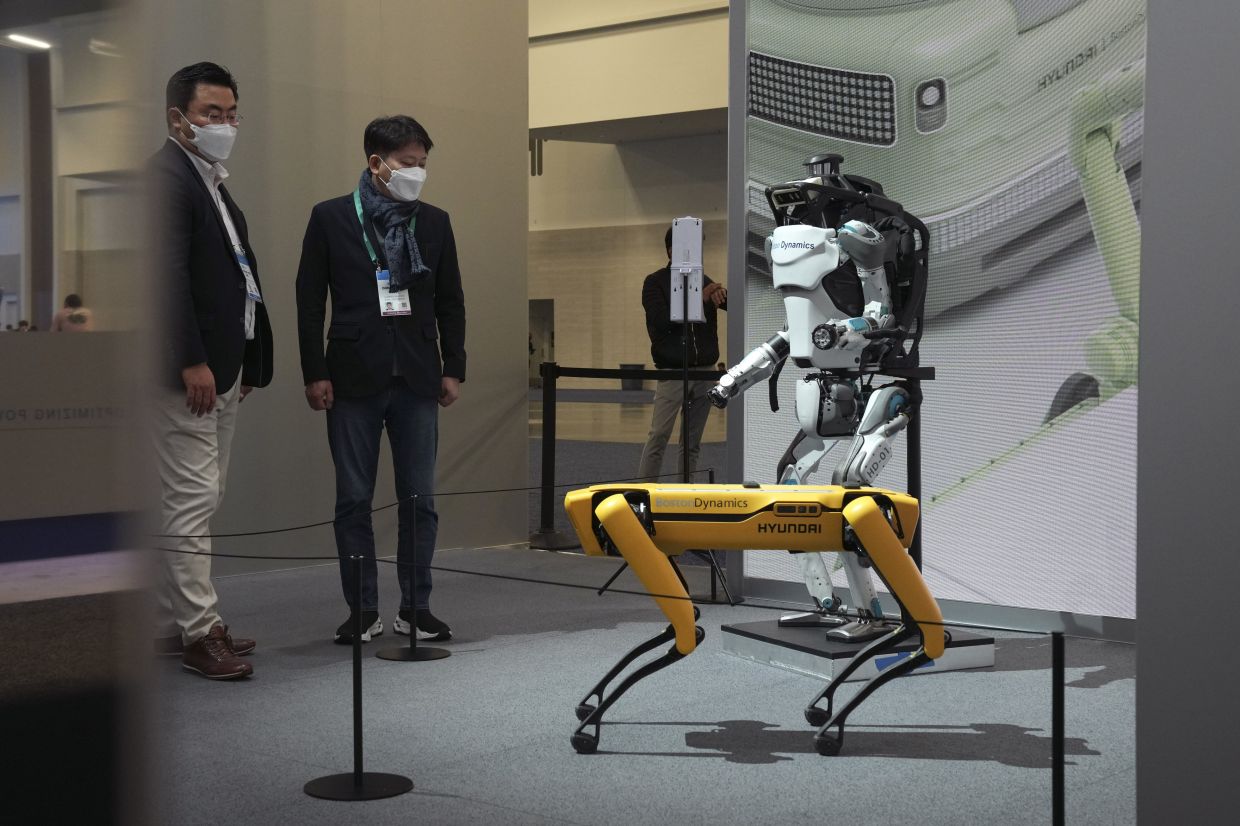 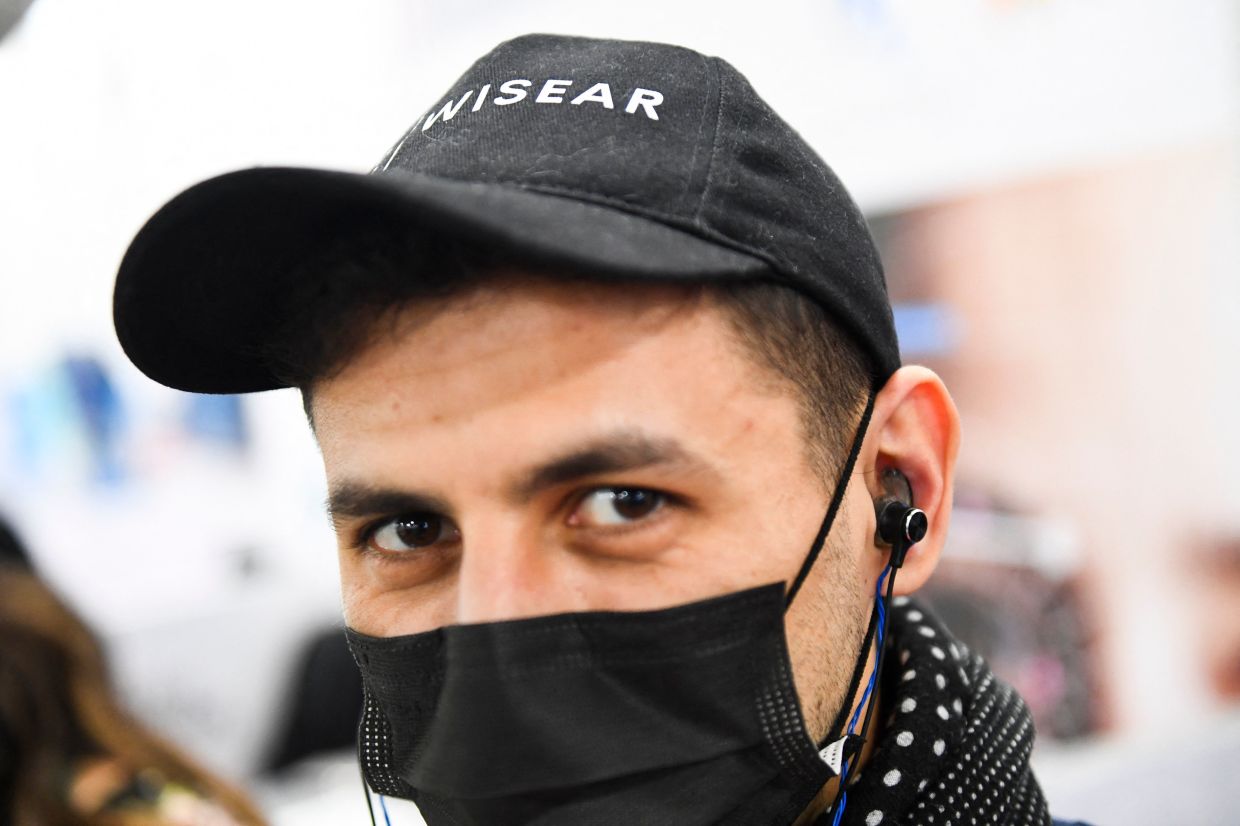 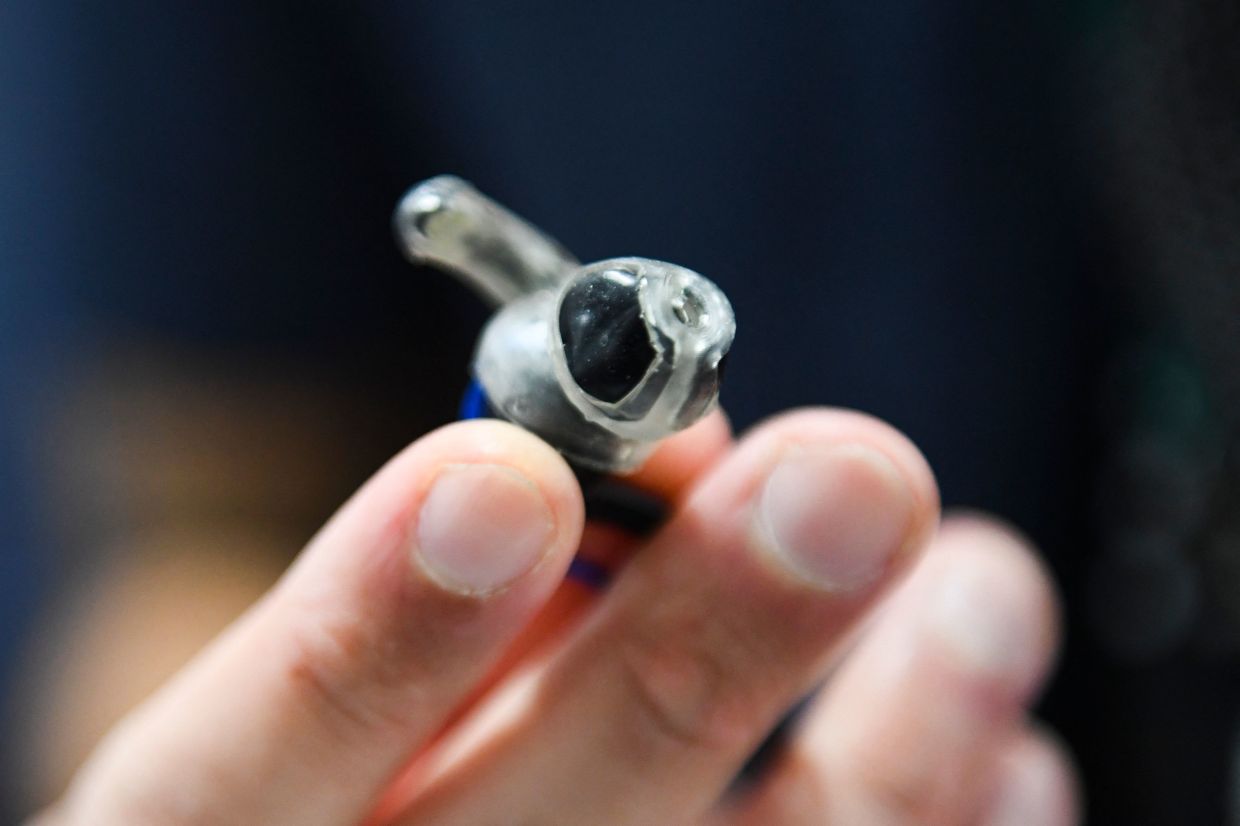 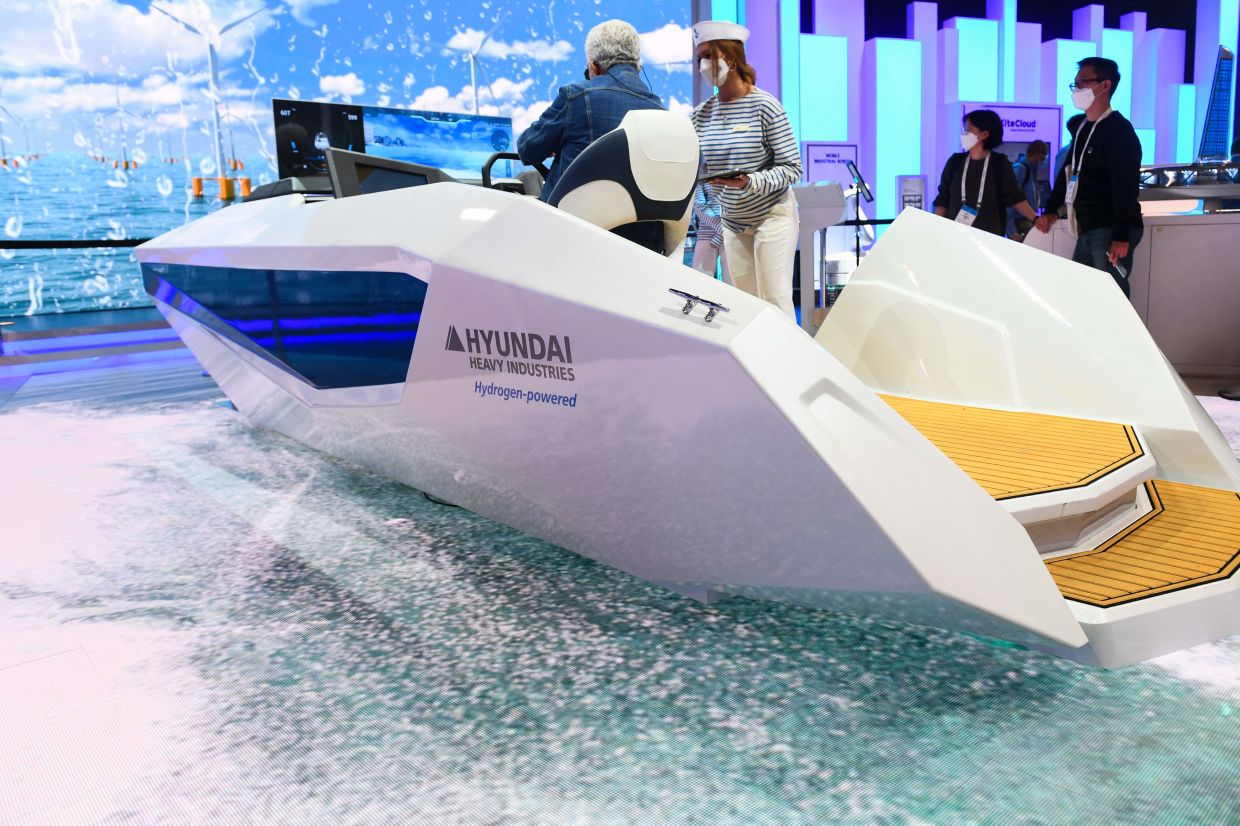 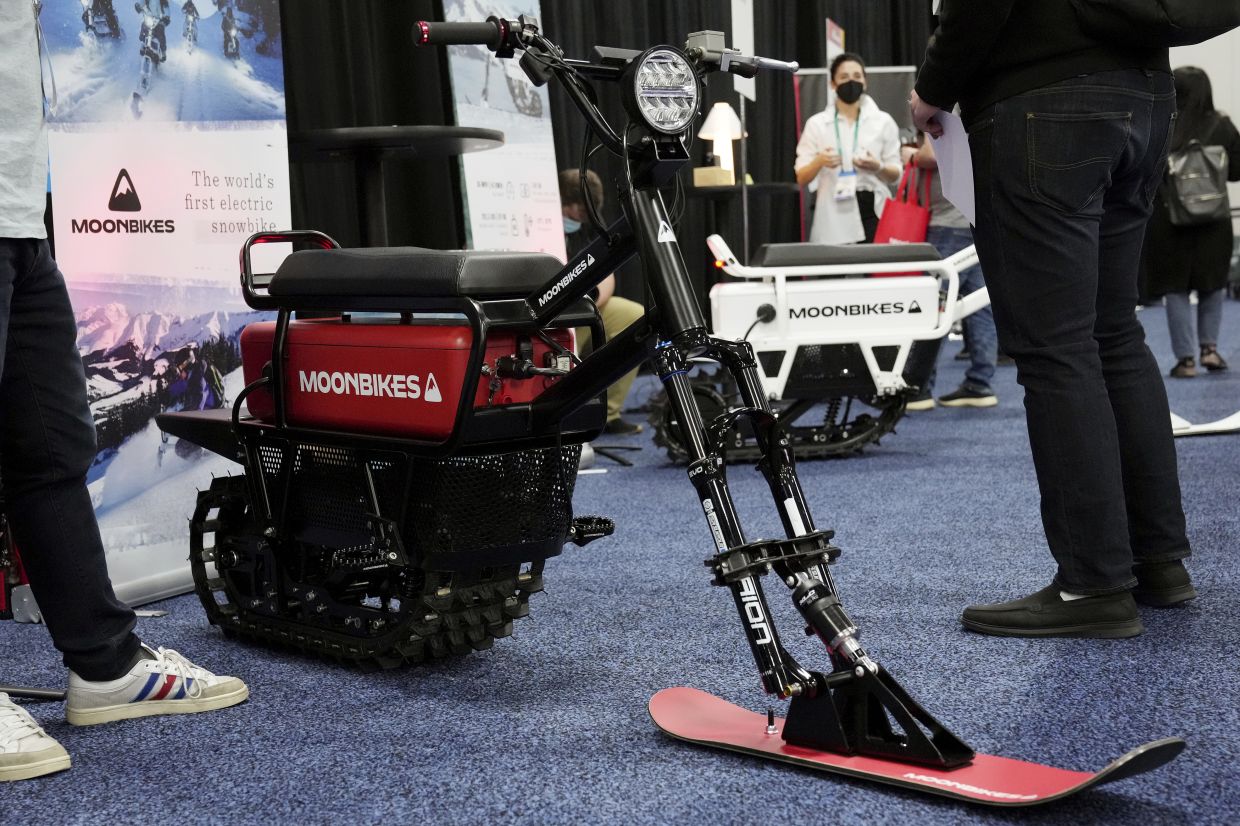 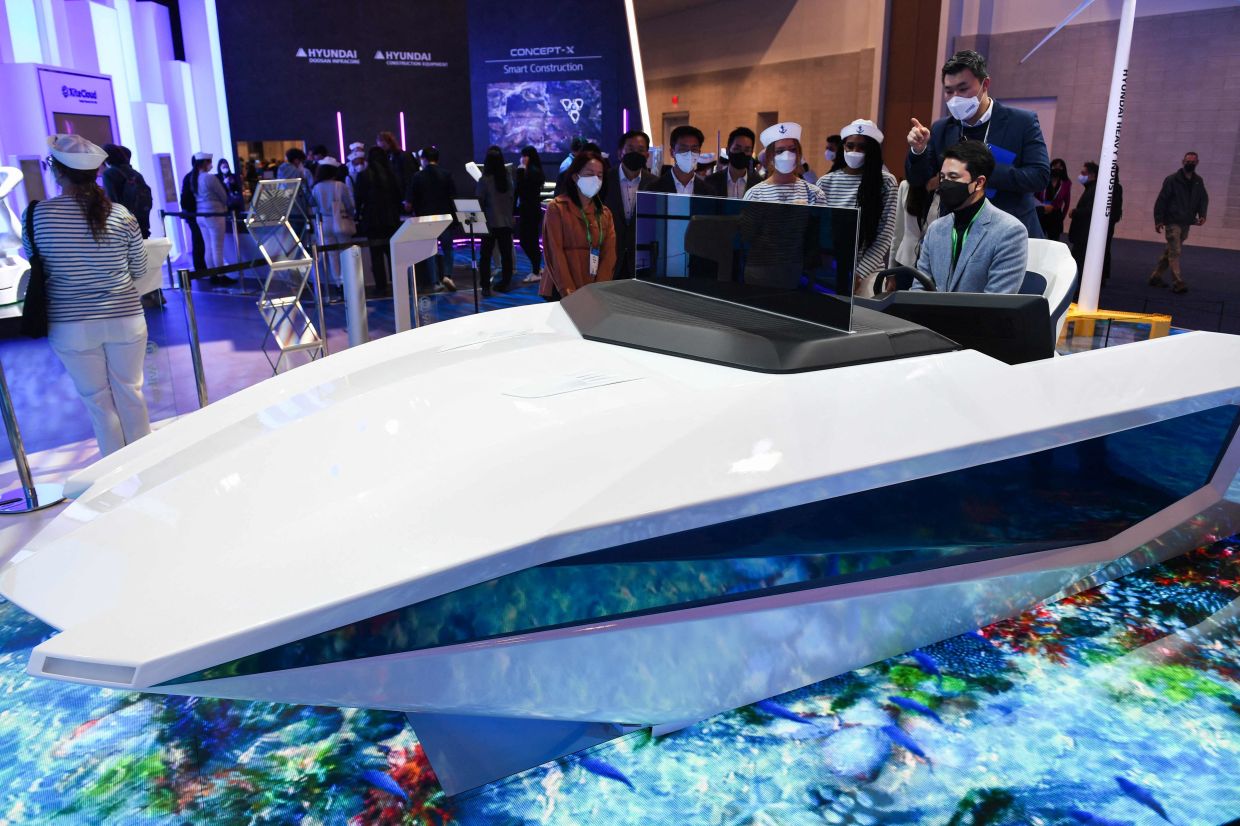 Achiakh demonstrates how he can stop the music playing on his smartphone simply by moving the jaw through a technology that enables a connected device to detect and interpret electric signals sent by the brain to a muscle during the Consumer Electronics Show on Jan 6, 2022 in Las Vegas, Nevada. — AFP

Achiakh holds a pair of prototype earbuds that allow him to stop the music playing on his smartphone simply by moving his jaw. French startup Wisear is working on a technology that detects electrical signals between the brain and certain muscles to communicate with connected devices. — AFP

A Moonbike on display at the CES tech show. The Moonbike is the world's first electric snow bike. — AP

An attendee sits for a demonstration in a model of the Hyundai Heavy Industries (HHI) Group's Avikus autonomous cruising leisure boat at CES in Las Vegas, Nevada. — AFP

CES gadget show turnout falls more than 75% thanks to Covid

At CES, tech alliances firm up in the self-driving car wars