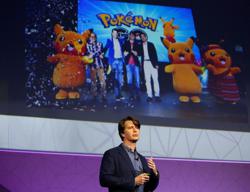 Niantic and Nintendo are evidently out to repeat the success of Pokemon Go with Pikmin Bloom, which involves walking to cultivate animated plant-like characters. — Pikmin Bloom/Niantic

Pikmin Bloom’s launch comes 20 years after the debut of the original video game created by Nintendo legend Shigeru Miyamoto, and is a rare step by the company to let its beloved titles be played on hardware other than its own.

“It does reflect a strong, ongoing partnership with Nintendo,” Niantic chief executive John Hanke said, providing an early look at the new game.

“Nintendo has been part of the Niantic story since the beginning.”

Niantic collaborated with Nintendo on a free Pokemon Go smartphone game that market-tracker SensorTower estimates has generated more than US$5bil (RM20.75bil) in revenue from in-app purchases since its release in 2016.

“Pokemon Go continues to be a powerhouse in the global mobile games market, kept relevant by a string of key updates and the consistent addition of new Pokemon to collect,” Sensor Tower said in a July blog post.

“The Covid-19 pandemic and lockdowns could have represented a huge challenge for a title focused on players being outside, but the addition of more stay-at-home functionality to keep users playing has paid off.”

Niantic and Nintendo are evidently out to repeat the success of Pokemon Go with Pikmin Bloom, which involves walking to cultivate animated plant-like characters.

Finding seeds and engaging with Pikmin is done through smartphone cameras and augmented reality features.

“Pikmin Bloom is designed to make your time outside, perhaps your daily walk, more fun and enjoyable,” Hanke said.

“I know from my personal experience, I’ve turned to my daily walk as the thing to keep me active and sane throughout the craziness of the past year-and-a-half plus at this point.”

The free Pikmin Bloom game launched in the App Store and Google Play shop in Australia and Singapore and is to be quickly rolled out in more countries, according to Niantic. – AFP

Nintendo’s 'Metroid Dread' is primed to be breakout success