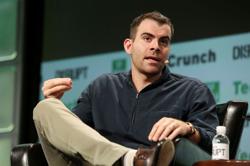 A seven-foot visual protest outside the US Capitol depicting Zuckerberg surfing on a wave of cash, while young women surround him appearing to be suffering on Sept 30, 2021, in Washington. The bombshell reports about Facebook and Instagram – their toxic impacts on young users and lack of truth or transparency – raise serious concerns about Big Tech’s approach toward kids across the board, Blumenthal said. — AP Images for SumofUS

Social media companies YouTube, TikTok and Snap will tout established protections of teen privacy to counter lawmaker questioning at a Tuesday hearing, seeking to distance themselves from the criticism faced by rival Facebook.

Executives from the companies face senators one day after a consortium of 17 news outlets, including Bloomberg, published dozens of articles based on troves of leaked Facebook Inc data that detailed how the company prioritised profits over the safety of users – particularly teenagers – on its products.

“Big Tech’s exploiting of powerful algorithms and design features is reckless and heedless, and needs to change. They seize on the insecurities of children, including eating disorders, simply to make more money,” Blumenthal said in a statement to Bloomberg.

“The bombshell reports about Facebook and Instagram – their toxic impacts on young users and lack of truth or transparency – raise serious concerns about Big Tech’s approach toward kids across the board,” he said.

Blumenthal and Blackburn plan to focus on how the apps can be used to harm kids and promote vandalism, bullying, eating disorders and manipulative marketing.

“For too long, we have allowed platforms to promote and glorify dangerous content for its kid and teen users,” Blackburn plans to say in her opening remarks.

She will also raise concerns about the safety of data collected by TikTok and whether it’s shared with the Chinese government, where parent company ByteDance is based. She will say that despite vague assurances, TikTok “has not alleviated my concerns in the slightest”, according to remarks shared with Bloomberg.

Blumenthal and Blackburn’s subcommittee previously heard from Facebook whistleblower Frances Haugen, the former product manager who leaked documents to the committee and the US Securities and Exchange Commission. Haugen highlighted how Facebook’s engagement-based algorithms lead harmful content to become viral on the platform. She said these algorithms particularly affect teenage girls who already have negative views of their bodies.

YouTube plans to tell the panel that its YouTube Kids, created in 2015, provides parents with tools to control and customise the app for children, according to remarks shared with Bloomberg. The company will say that kids under 13 who aren’t in a parental “supervised experience” are not allowed on YouTube. YouTube has removed seven million accounts in the first three quarters of 2021, with three million removed in the last quarter due to increased automation.

TikTok will highlight specific actions it has taken to protect children’s safety in recent years, including disabling the direct messaging feature for users under age 16, the company told Bloomberg. The company also disabled all users from sending certain videos, photos and website links, and only videos that have been approved through content moderation are allowed.

“We know that trust must be earned through action, and we continue to build age-appropriate experiences for teens throughout their development and empower families with parental controls,” TikTok’s Beckerman told Bloomberg in a statement.

Snap will emphasise that one of its strongest privacy protections is that it only allows users ages 13 and up, and has no plans to market to kids under 13, the company told Bloomberg. The registration process fails for individuals under the age of 13 that attempt to sign up.

Blumenthal and Massachusetts Democrat Ed Markey have sponsored legislation to update the Children’s Online Privacy Protection Act, which was enacted in 1998, years before the launch of the social media companies. The law currently restricts collection of personal information of children under age 13. The legislation would expand the protections to age 16. The bill has bipartisan support from Republican Senators Bill Cassidy of Louisiana and Cynthia Lummis of Wyoming.

Blumenthal also backed legislation to prohibit certain manipulative marketing practices geared toward online users under the age of 16, including banning auto-play features and algorithms that amplify violent and dangerous content. That bill has no Republican cosponsors to date. – Bloomberg