Apple iPhone with a disappearing camera notch? Just check what this report says

The popular WhatsApp messaging app has this feature where it makes its chats, photos and videos disappear after a certain period of time. It has been named ‘View Once’ and the reason is is that the message is intended to be seen once and then it should disappear. And that is what it does, simply vanish.

Before you get excited, the tech is still being experimented with and there is no chance of it actually being rolled out any time soon. In fact, it is definitely not coming on the Apple iPhone 13 series, which will be launching within months. Patently Apple, which spotted it first, said that Apple has won a patent at the US Patent and Trademark office that hides the iPhone’s camera and eliminates the notch. The notch will remain in disappearing mode when it is not in use. The technology is being referred to as “adjustable display windows”.

Tech Radar says there are two ways of doing this. One will use a rotating hinge to open it up when the user wants to use it. The second is a downward sliding ‘moveable display’ that would slot into position and be visible.

This tech may or may not be used in the future on iPhones, but it certainly shows that Apple has a goal in mind and that is to do something with the priceless real estate on the iPhone display that is being occupied by a camera, which is not used that often. That space is definitely up for experimentation, as far as Apple is concerned, in order to provide more space for other things that can be of use to consumers. Whether this tech will actually ever be used is still unknown and in fact, it may well end up in the failed-projects dustbin of history.

In fact, while the disappearing camera notch is just the most recent, there have been a number of other experiments that have been reported over the recent times and it even includes a punch-hole camera design, and even an under-display camera. – Hindustan Times, New Delhi/Tribune News Service

The chips are down: why there’s a semiconductor shortage 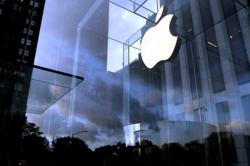