Foxconn is offering a signing bonus worth up to US$1,237 to former workers willing to return to its production line in Zhengzhou for the peak season. Apple’s new iPhone 13 line is expected to be launched in the third week of September. — SCMP

The world’s largest iPhone factory, located in the central Chinese city of Zhengzhou, is offering record-high cash rewards for workers, especially experienced hands, to sign on as Foxconn Technology Group ramps up its production capacity in a fresh sign of China’s central role in Apple’s global supply chain.

As part of its “biggest raise in the past five years”, Foxconn said the unit that produces mechanical parts for the iPhone – called innovative Product Enclosure Business Group (iPEBG) – is offering up to 8,000 yuan (RM5,140) as signing bonus to former workers willing to return to the Zhengzhou production line for the peak season, a jump from 5,500 yuan (RM3,533) a month ago and 5,000 yuan (RM3,211) in 2020, according to recruitment posts published on Monday by the Taiwan-based company, the world’s largest electronics contract manufacturer.

This year’s bonus range for returning workers is the highest since the factory started operations in 2010, according to the South China Morning Post’s review of past recruitment advertisements from Foxconn, formally known as Hon Hai Precision Industry. 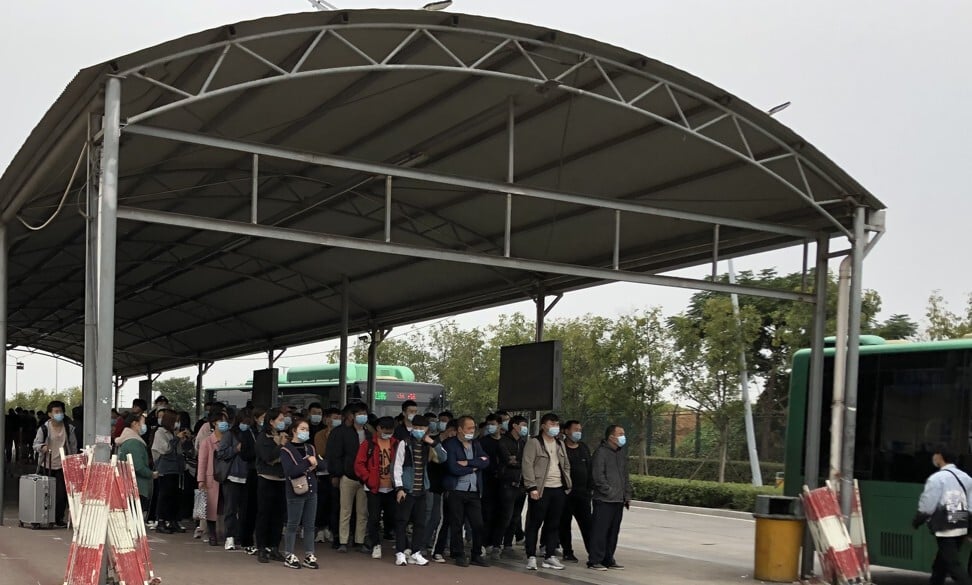 Workers will receive their bonuses after working for iPEBG for four months and staying until the end of the peak season, according to the posts.

At Foxconn’s integrated Digital Product Business Group (iDPBG), the division responsible for iPhone assembly and also in Zhengzhou, both returning workers and new referrals will be awarded 600 yuan (RM385) for each month they stay – with a cap of 5,400 yuan (RM3,469) for nine months – on top of a monthly base salary of 2,100 yuan (RM1,349), according to the recruitment posts.

The bonus pay initiatives for assembly line recruits at Foxconn’s vast Zhengzhou facility, which has as many as 250,000 workers, indicate heightened preparations for the expected new iPhone launch later this year, according to Will Wong, a Singapore-based analyst at tech research firm IDC

Foxconn typically raises its bonus for new and returning workers to cope with the peak season rush to manufacture the latest iPhones. In August and September last year, Foxconn’s bonus pay for new iDPBG recruits in Zhengzhou through referral reached up to 9,000 yuan (RM5,781), comprising 8,500 yuan (RM5,461) to the new employee and 500 yuan (RM321) to the referrer.

Apple is expected to launch its new iPhone 13 line in the third week of September, according to Dan Ives, managing director at investment firm Wedbush Securities, in a research note published on Monday.

Ives estimated that Apple’s supply chain in Asia will enable the production of 90 to 100 million units to meet the initial orders for iPhone 13, compared to 80 million units for the iPhone 12 in the same period last year.

The iPhone 12, which is Apple’s first 5G smartphone, was launched on Oct 13 last year and started its wide international release on Oct 23.

Apple is targeting 130 to 150 million new iPhone units for the second half of 2021, according to Ives.

Apple has added more enterprises from mainland China than anywhere else to its list of suppliers over the past three years, showing how the world’s second-largest economy remains integral to the US technology giant’s hi-tech supply chain. That was helped by the country’s ability to contain the coronavirus outbreak and swiftly reopen its economy.

By comparison, production at Foxconn’s iPhone factory in India has slumped by more than 50% because of increased Covid-19 infections among workers there. Vietnam, where Foxconn also has production facilities, was also hit with a new wave of coronavirus cases since last month.

“The Covid-19 flare-up in India and Vietnam did underline how important China is in the global supply chain, and the bonus raise also has a similar implication,” said IDC’s Wong. He indicated, however, that it also “implies the importance of diversifying supply chain and production amid all the uncertainties”.

US-China tech war: Apple puts China squarely at the apex of supplier list, bucking talk of decoupling and scrutiny of its vendors