The Montessori app Anton is one of many apps designed to teach young children with games. — dpa

Add, subtract or practise English on the computer - even before the pandemic, learning apps for pupils were an addition to school lessons. But in coronavirus times, they have at times become a substitute for them.

"Especially when the schools were shut from one day to the other, Anton was my salvation," says a primary school pupil from the district of Neukoelln in Berlin about the Anton app, which was developed in the German capital and is one of the most used.

Pupils can use Anton to do exercises at home sent by the teachers. Many say that learning this way is fun, because they get instant feedback and rewards in the form of virtual coins for correct answers. With these coins, the pupils can play computer games or dress their avatars.

But some parents are concerned about this rewards system. "My six-year-old son had never had anything to do with computer games. But through homeschooling, of all things, he has started shooting asteroids. Is this necessary?" says a Berlin mother.

Another parent, a father, thinks it is questionable to constantly reward children. "Don't they like learning on their own accord?" he asks.

Chidren lack the motivation to learn on their own

According to Heinz-Peter Meidinger, head of the German teachers' association, everything that encourages children to engage with school-related things outside of lessons is positive.

"But games are not an intrinsic motivation for children to learn on their own accord," Meidinger says.

Connecting learning and play may be clever, says Christian Gross, spokesperson of the association for media addiction. "Entry is being made easy especially for children who are already into computer games," he says.

"What we're offering are simply mini-games," says David Hoermeyer, head of the firm Solocode, which developed Anton. Many games promote concentration and have pedagogic value. "If they kids really want to play computer games, they don't do that with Anton."

In Hoermeyer's view, the games are a small incentive that is not interesting for everybody, as some kids don't care fore the games.

Other learning programmes also work with rewards, such as the language-learning app Duolinguo, where users can also win virtual coins to unlock new levels. In the app Kekula, children can earn coins that they can exchange for YouTube videos, and Scoyo promises coins in exchange for crafting blueprints or avatars to raise spirits.

Not a viable long-term model

"Someone who is learning out of interest and joy is quickly trained to learn for a reward," says addiction therapist Gross. Later, if the reward does not happen anymore, this can lead to frustration and, in the worst case, to children not wanting to learn anymore at all.

"In the long term it is not a good model at all to induce young people to performance or learning. It would make more sense to promote certain talents or a specific enthusiasm without constant instant rewards," Gross says.

The development of the Anton app was funded by the EU European Regional Development Fund (ERDF) and the Berlin Senate. According to the authorities, it is one of the most used learning apps in Germany, although the developers don't publish user statistics.

Teaching association president Meidinger estimates that several thousands of schools are using Anton in Germany. He would welcome a scientific assessment of the app, especially since it was funded by the state, and says that studies and research are being planned.

"We are getting much more positive than negative feedback," Hoermeyer says. An what is more, if teachers or parents don't like the games, they can easily switch them off.

"Some parents report that their children are very motivated when learning with the app. If we had received a lot of negative feedback, we would have already updated the games section," Hoermeyer says.

Teachers also have a good overview and can assess whether the games are a distraction or a motivation, Hoermeyer is convinced. A teacher in Neukoelln, meanwhile, has nothing against it: "The reward system with the computer game is surely motivating."

"We expect that there will be less digital learning when schools open again," Hoermeyer says. He also does not believe that sitting in front of the computer all day is the right approach.

"We are not doing this to replace school, but provide a useful supplement to what it the greatest asset of school, and that's the personal contact between pupils and teachers," he says.

The mother from Berlin can confirm this experience. Since the beginning of lessons after lockdown, the situation at her home has relaxed and there are no more discussions about computer games.

"After two months without Anton, and with alternating (in-person and at-home) lessons, he is not asking about the games anymore." — dpa 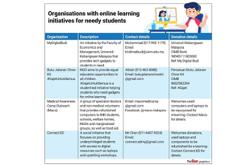