Angelina Mistretta (right) spins fidget toys as lessons stream through headphones, keeping her hands busy in hopes her mind will engage, too. — AP

AMERICUS: At first, many schools announced it would last only a couple weeks. A year later, the unplanned experiment with distance learning continues for thousands of students who have yet to set foot back in classrooms.

Comfortable homes and private tutors have made it easier for those with access. Expectations are higher at some schools than others. And growing numbers of students are being offered in-person instruction at least part time.

But students of all backgrounds have faced struggles with technology, the distractions of home life, and social isolation. The Associated Press followed four students on a typical day to find out how they’re coping a year into the coronavirus pandemic.

It’s not quite 9am and Kristen King is on her living room couch, a Chromebook propped on a TV tray.

Her Advanced Placement English instructor puts on a recording of a speech President George W. Bush gave on Sept 11 – part of a discussion about tone in writing and speaking.

Kristen, who is not a morning person, fights off yawns, plays music to help her focus and messages with friends.

“The first 30 minutes of class, I won’t really be there,” she says.

In Española, New Mexico, Javin Lujan Lopez joins a video chat with his football teammates for study hall. It’s a way for the Pojoaque Elks football players to spend time alone, together.

His first class is finance. When the teacher asks how the owner of a lemonade stand might increase their profits, Javin types his answer in the chat: “Raise the price of the lemonade.”

He moves on to his only other class of the day, physical education. The 17-year-old senior has a camera set up to show him on the porch, where he has a bench press and weights. But when the teacher announces the students don’t have to log their workouts, Javin says he’s not even going to go for a run.

He’ll be exercising at football practice, and besides, his friends are online now, playing Call Of Duty. 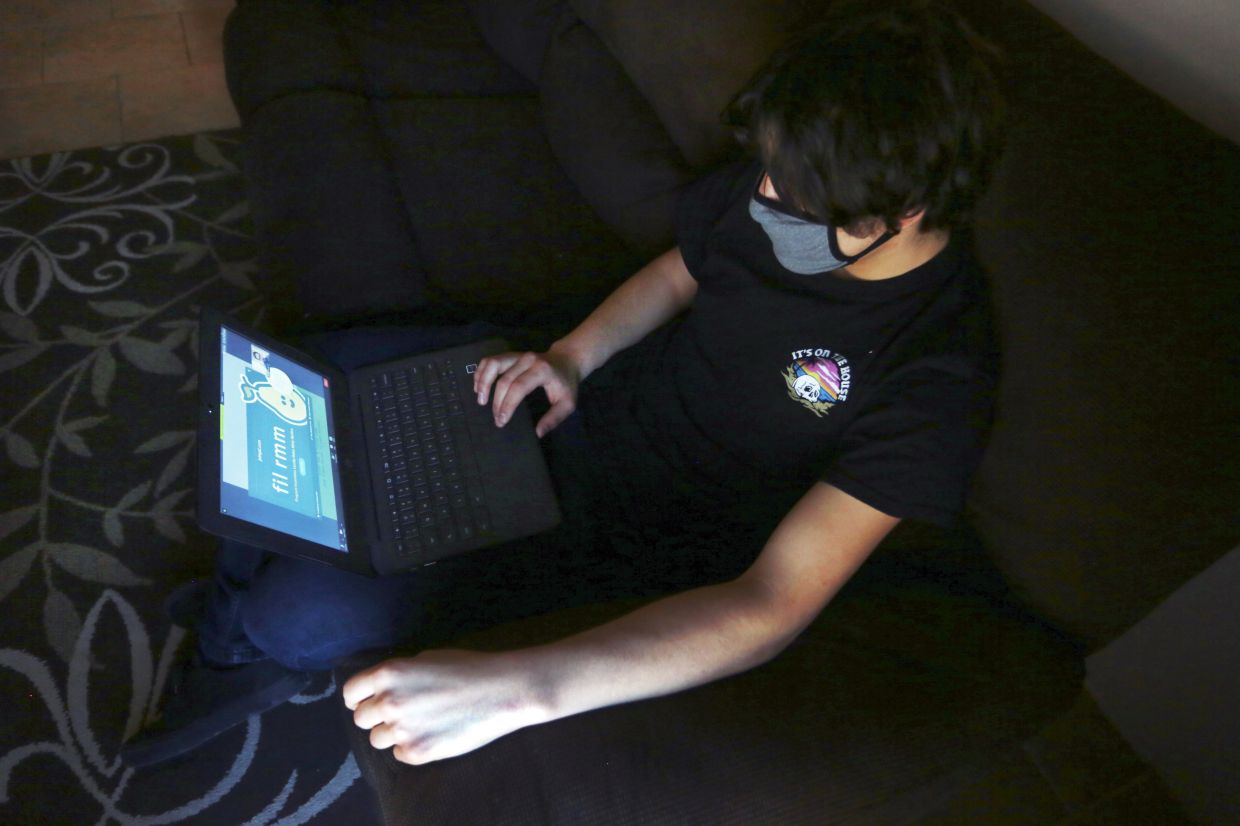 Javin isn’t sure what will happen after graduation. He's considering a welding certificate program at the local community college. He applied to universities in New Mexico and Colorado but feels like the pandemic year didn’t allow him to put his best foot forward. — AP

Barefoot and eating a bagel, 13-year-old Graciela Leahy settles in front of her iMac for a stretch of nearly six straight hours at her bedroom desk.

Her parents invested their first pandemic money from the government to create separate rooms for Graciela, an eighth grader at Ohio’s Columbus Gifted Academy, and her younger sister.

Graciela’s mom, Elisa Leahy, is quick to point out the privilege of having such flexibility, noting friends in Columbus’ immigrant community who have more challenging circumstances or primarily speak Spanish had a harder time navigating the transition.

Still, there are hiccups. In Graciela’s band class – now mainly music theory – the instructor yells at his cat and takes attendance, wondering aloud why a quarter of the class is absent.

Her English teacher is out with Covid-19, so another oversees the reading of Romeo And Juliet. A classmate holds a baby brother during history class, where the teacher’s efforts to keep students’ attention include a video that imagines Napoleon Bonaparte playing Let’s Make A Deal over the Louisiana Purchase.

At 11am, Angelina Mistretta spins fidget toys as lessons stream through headphones, keeping her hands busy in hopes her mind will engage, too.

When in-person school stopped, the expectations that come with attending City Honors High School in Buffalo, New York, did not. On the 16-year-old junior’s schedule this year are International Baccalaureate literature, AP history, Algebra 2, an IB French class and an IB biology class.

The trouble is, her focus has been affected by anxiety and “a severe case of I don’t want to,” she says. A US$25 (RM102)-a-session tutor helps with algebra, but she’s also behind in two other classes.

These days, her mother, Wendy, works beside Angelina on the living room couch. Each day Angelina must complete that day’s assignments plus one makeup task.

“There’s definitely a fatigue that’s setting in for all of us,” Wendy Mistretta said. “It’s exhausting doing this work day in and day out. And there’s a mental exhaustion when you don’t know how or when it’s going to end.”

Around noon, Javin begins a marathon video game session. As he talks with his fellow players, his mother works nearby, each wearing earbuds and engrossed in their own conversations.

It’s her first day back as a payment processor for the state game and fish agency since getting Covid-19 in October. She still has lingering lung problems.

Javin isn’t sure what will happen after graduation. He’s considering a welding certificate programme at the local community college. He applied to universities in New Mexico and Colorado but feels like the pandemic year didn’t allow him to put his best foot forward.

“Yes, it’s hard to apply because we’ve been doing everything remotely and like they’re just going off of, off of, that and they’re not going off of, like, actually what you learn because like during remotely, you got some teachers that, like, they’re older and they just know like, the teaching, they don’t know all the new technology and stuff because it is new to them,” he says.

On Monday, the state announced schools could reopen. Javin, who had spent the day snowboarding, made it to practice for the good news. 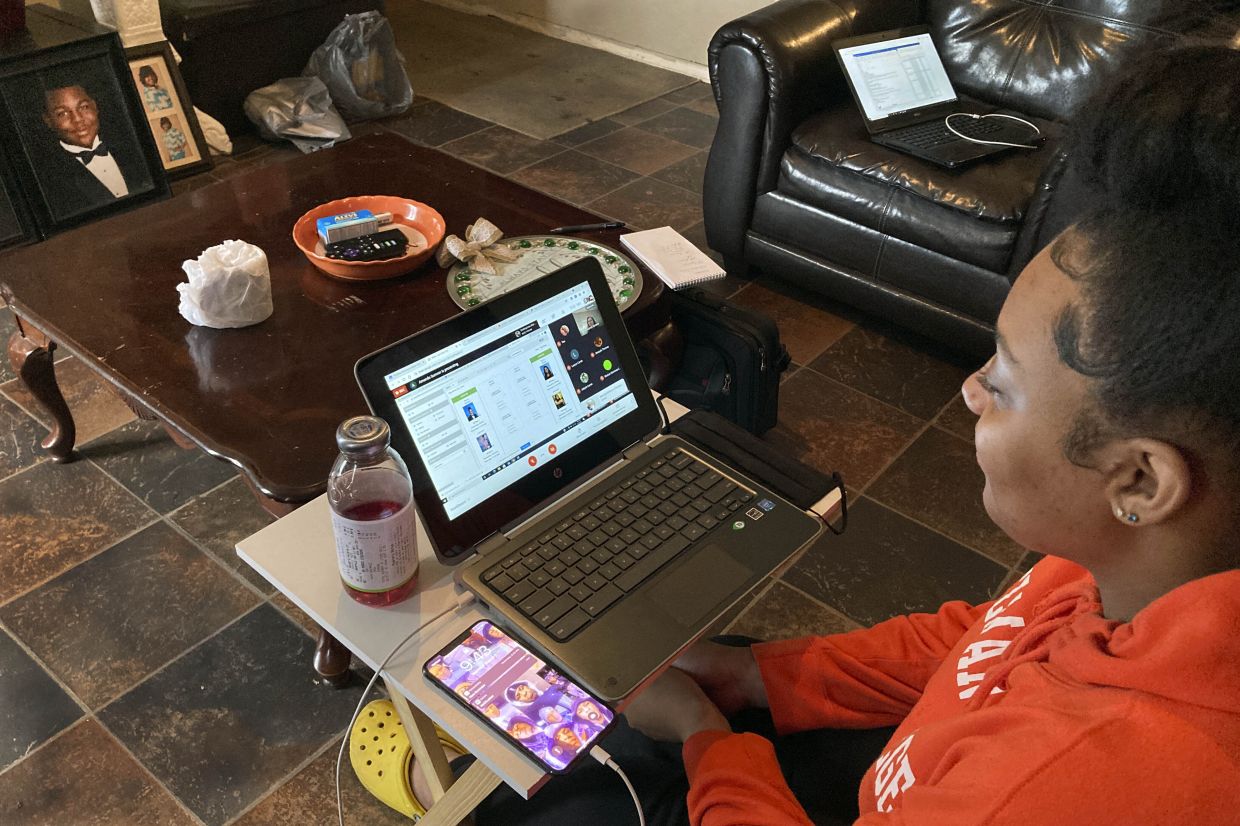 Kristen King said distance learning has been challenging as she prefers hands-on help from teachers. — AP

At 12.48pm, Kristen begins her fourth and final class, business communication. Like her other classes, it will end before its allotted 90 minutes are up.

The teacher announces a quiz. Students who were watching on their phones scramble to boot up their computers.

Kristen races through the quiz, then gets ready for a skit that is supposed to illustrate a form of distraction and how to control it. Students haven’t rehearsed the script they wrote, partly because they can’t hold an online meeting on their own using the school’s software.

Kristen says she has kept earning As and Bs this year, but it’s been harder.

“I feel like I’ve learned less than what I’ve learned in school,” Kristen said. “The work is more independent. We really have to learn on our own.”

When Graciela’s science teacher divides students into virtual breakout rooms to help one another finish a worksheet around 1.10pm, no one says much.

Graciela uses some of that time to submit late math homework. Teachers are being lenient and there’s no consequences as long as the work gets done before the grading period ends.

“I procrastinated a lot last year, but I didn’t turn anything in late. I just waited until the very last minute to do it,” she said. “But now, there isn’t really the last minute. You can just do it whenever.”

A new type of extracurricular activity wraps up her school day. She has a videoconference with classmates who are compiling quotes into a “Dear 2020” video.

They’ve picked an optimistic submission as a potential ending: “You didn’t defeat me. You helped me grow.” – AP 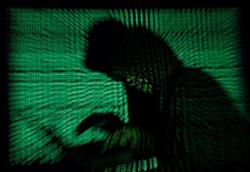