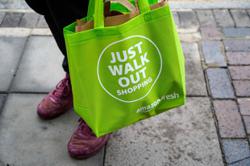 WARSAW (Reuters) - As Amazon sets its sights on central and eastern Europe, the e-commerce giant will need to convince long-time Allegro shoppers like Elzbieta Modrakowska to click away from the region's leading online marketplace.

While prioritising its expansion to other, bigger markets, Amazon has given companies such as Allegro the time to lay deep roots and prepare for its arrival - something the Polish firm has done with loyalty programmes, free delivery and other perks.

"I don't think we will switch ... Allegro has set the bar very high," said Modrakowska, whose weekly shop spans everything from organic food to batteries. She is one of Allegro's 20 million monthly customers in Poland, a nation of 38 million.

"It has the parcel lockers option and I don't know how Amazon will handle this. Waiting for a courier or going to the post office is not an option."

Amazon launched its Polish website on Tuesday, entering a fast-growing e-commerce market with a proven playbook and global reach that have already secured success against entrenched local competitors in other markets, such as Argos in Britain.

"Business is not winner take all - industries rise together," an Amazon spokesman said when asked about local competitors.

"There's a ton of green field ahead – and there will continue to be lots of winners," he said, adding the company focused on customers rather than competitors.

The U.S. company currently has a tiny presence in emerging Europe's e-commerce market, which Euromonitor estimates at 16 billion euros ($19 billion) in Poland and 6 billion euros in the Czech Republic. Until now, it has run logistics centres in the region and served customers from its German website.

The region is dwarfed by Europe's top e-commerce markets of Britain and Germany, worth 1 trillion euros and nearly 700 billion euros respectively, according to Euromonitor.

But Poland's 42% growth rate leads Europe, and makes it an attractive target.

Allegro told Reuters it had improved terms for shoppers and third-party sellers alike during the COVID-19 pandemic, as more consumers shifted online.

"We reduced fees and provided extended payment terms," Chief Executive Francois Nuyts said. "We are convinced that by serving sellers and consumers extremely well during the pandemic, they will stick with us."

Allegro, founded in a Poznan garage 20 years ago, debuted on the Warsaw Stock Exchange in October with one of Europe's biggest initial public offerings of the year, and immediately became Poland's largest listed firm.

But in Poland, Allegro has a 33% share of the e-commerce market, with Alibaba Group's AliExpress at 3.6% and Amazon at 1.3%, according to Euromonitor.

While Allegro declined to speak specifically about Amazon, its chief executive outlined plans to increase investments in areas such as research and development. It also plans to hire 1,200 workers for a new logistics centre near Warsaw.

"We see across the region this massive acceleration. It started a little bit later, but it is catching up much faster than I have seen anywhere else, at least in Europe," Nuyts said.

"That's why we have such a hiring streak ahead of us," he added, referring to Allegro's projects mostly in innovation and R&D.

E-commerce experts say local market knowledge can confer a competitive edge, especially should Amazon repeat the missteps it made last October in Sweden where translation errors and glitches, including mistaking the Argentinean flag for the Scandinavian country's, marred the company's debut.

"Allegro has developed a strong local brand," PwC's central and eastern Europe consumer goods and retail chief, Krzysztof Badowski, told Reuters. "They have mainly competed with themselves but still introduced concepts like same-day delivery to strengthen their position.

"Challenging Allegro will require a significant investment from Amazon, but Allegro is in position to defend its share for some period of time."

Online retailer Alza, the largest Czech player whose turnover hit 37.3 billion crowns ($1.7 billion) in 2020, has also been gearing up for new market entrants.

For example, the privately-held company, which is targeting 20% growth a year, is starting to develop its own marketplace.

It also plans to boost the number of parcel pick-up boxes in its core markets of the Czech Republic, Slovakia and Hungary to around 3,000 in 2022 from 800 currently, vice chairman Tomas Havryluk told Reuters.

Alza, which also operates in Austria, Germany and Britain, may look to double the number of countries it is in over the next five years, although it hasn't decided which ones.

"We are trying to catch up as much as we can while we have time," Havryluk said on Amazon, while adding the U.S. giant did not dominate the firm's plans.

"The only thing you can do (in the home market) is have more customers and better relations with them than any new competitors coming to the Czech Republic."