Cassandra Flore picks up a package of paper towels while completing a shop and deliver request while working for DoorDash in Columbus, Ohio. Carryout and delivery orders have surged, but the spike in demand for their services hasn’t resulted in a windfall, drivers said. — Columbus Dispatch/TNS

US drivers for third-party delivery apps such as Uber Eats, DoorDash and GrubHub experienced a flood of orders at the onset of the coronavirus pandemic, as restaurants closed for in-person dining and patrons largely decided to enjoy their meals at home.

Carryout and delivery orders have surged, but the spike in demand for their services hasn’t resulted in a windfall, drivers said.

More orders initially meant higher pay for many, but as more drivers joined the apps, competition increased and customers seemed less willing to sign for a tip, drivers said. Services pay commission based on the cost of an order, but drivers said that many orders aren’t worth taking without a gratuity.

“I feel that there was quite an upswing in people signing up for these services,” said Nate Vanderhoof, a 42-year-old Uber Eats driver from Columbus, Ohio. “It’s fairly easy to make money. You go out and drive when you want, stop when you want. There’s no set schedule.”

Drivers said they are making just as much money as they did before the pandemic, despite a surge in business.

“It’s been better and worse,” said Alyssa Jones, 26, of Ashville, Ohio. Drivers get “more offers, but no one wants to tip”.

Food delivery drivers for third-party delivery apps are independent contractors who get paid per delivery, making their salaries dependent on the volume of deliveries – and tips – rather than hours worked.

“I'm on a couple of the Uber Facebook pages, and that’s one of the complaints, that there’s a lot of rideshare drivers,” Vanderhoof said. “They talk about the good old days when there weren’t as many drivers, they were a lot busier and they would make more money.”

The apps said the total tips drivers received increased in 2020, according to their statistics. Across GrubHub and the GrubHub-owned Seamless, customers tipped an average of 15% more, company spokesman Grant Klinzman said.

“So if a diner was tipping 20% before, they tipped more than 22% during the pandemic,” he said in an email.

Klinzman said the company doesn’t release information on its pay rates, but stressed that GrubHub helps drivers calculate their pay rate through its website.

Most of the drivers contacted for this story said they work part-time, supplementing income from other jobs. A minority said they depend on third-party delivery services to pay their bills. Those are the drivers who said they struggle the most.

Jones said she started delivering for GrubHub, UberEats and DoorDash after her daughter was diagnosed with autism. Frequent and irregularly scheduled doctor’s appointments made a full-time job with traditional hours impossible.

“I couldn’t work a full-time job with her appointments, and she needed extra help at home,” she said.

Third-party delivery services afforded her the chance to work on her own schedule, but when asked whether she makes enough to pay her bills, Jones said, “It depends on the tips, but mostly no.”

Jones said she often is stuck working long hours now that customers are less generous, and she finds herself holding out for larger deliveries and bigger tips to make ends meet.

Vanderhoof drives for Uber and Uber Eats to supplement income from his primary job. But when he was unemployed for several months at the height of the pandemic, the apps were his only income.

Vanderhoof earned enough to pay his bills, but it was tight.

“I learned how to budget pretty good,” he said. “If I had big bills coming, I knew that I had to drive more, stay out longer, and drive during the most opportune times.”

Even so, Vanderhoof said he likes the work and feels the money he makes more than offsets the cost of gas and car maintenance. Services pay a commission for each delivery, but drivers are responsible for gas, car repair and maintenance, and insurance.

Sarah Dygert, 36, of Columbus, said she was able to make ends meet driving for DoorDash full-time by working out an intricate system. She tracks the location and hours she worked and the orders she received to identify the best times and places to work.

“If you’re willing to put in the work and keep driving and keep accepting orders, then it’s all based around when you want to work,” she said.

Dygert worked as a bartender and server for the District Pourhouse in the Gateway District near Ohio State University’s campus. But the bar and restaurant closed when Gov. Mike DeWine shuttered most non-essential businesses in mid-March, and Dygert found herself unemployed.

She said the money she made delivering meals completely replaced her salary and tips from the District Pourhouse, helping her pay her bills and save a small amount of money once her obligations were met.

Richard Figley, 68, of Clintonville, Ohio, delivered for food apps before the pandemic as a supplement to his Social Security checks. He is one of the few drivers who said he subtracted the cost of gas and car repair from his overall income, and he was unimpressed with the results.

Figley is an Air Force veteran who works as a marketing consultant.

“If you take into account wear and tear on your car and everything else that goes into it, you come out making about US$10 (RM40) an hour,” he said. “It looks good because you have a lot of cash, but if you put it into an Excel spreadsheet (comparing expenses with revenue), you quickly find out that you’re not making any money.”

The commission attached to a delivery depends on the size of the order, and drivers said they see more orders for inexpensive fast food meals now that Ohioans are mostly staying home.

Drivers have different philosophies on small orders. Some take as many deliveries as they can, others hold out for the most expensive meals.

“Any opportunity is a good opportunity for me,” Vanderhoof said. “Sometimes it's a super short ride where I’m only pulling in US$3 (RM12) for a couple miles. To me, that means it was quick, and I can move on to the next ride.”

Cassandra Flore, 36, of Gahanna, Ohio, takes a different approach, one she gradually honed in her nearly three years driving for DoorDash and UberEats.

“I’m a single mom, and I needed a second job that let me work when it was convenient,” she said.

The search for a side gig led her to Uber, a ride-share service that pays drivers a commission for each ride. The service introduced her to UberEats a few years ago.

“I hated it at first, but then I really got into it,” she said.

“I’ve been doing it for so long, I learned tricks of the trade,” she said. “When I first started doing it, I thought you had to accept everything they sent you. I realised like a year later that you don’t really get penalised for declining trips.”

The services incentivise drivers to take every order, offering perks to those who don’t refuse deliveries. But drivers overwhelmingly said those perks aren’t worth it.

Columbus, however, is so busy, neighbourhoods are rarely off-limits for long, Flore said.

“The benefit is not good enough,” she said.

Customer complaints seem to have surged along with food orders, drivers said. While drivers aren’t financially liable if a customer says their food was cold or didn’t arrive on time and asks for their money back, too many complaints can get a driver kicked off the platform.

To ensure prompt deliveries, driver Jennifer Nelson, who delivers for UberEats and DoorDash, said the apps give drivers a strict schedule.

Despite the expansion in the ranks of third-party delivery drivers, the apps aren’t an option for everyone.

Figley, for example, decided the odds of contracting coronavirus are too great a risk and stopped driving near the beginning of the pandemic.

“I’ve got some health issues, and if I got Covid, that would be really problematic,” he said. – The Columbus Dispatch/Tribune News Service 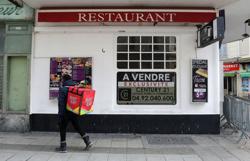 Bitcoin falls 11.1% to $53,356
How to retrieve your WhatsApp account if your phone is lost or stolen
WhatsApp group members now have control over disappearing messages
Are employers using Zoom too much?
Teens are growing more depressed: could a mental health warning app help?
Amazon's video game division cancels Lord of the Rings game announced in 2019
Microsoft’s US$20bil AI deal will shake up how we work
Sony to roll out first major software update of PS5 since launch
Renting a car? Don’t forget to unpair your phone afterwards
ARK buys another $64 million in Coinbase shares, sells $99.5 million of Tesla shares