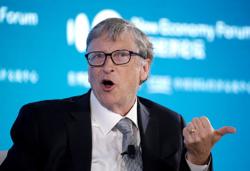 Gates believes there must be a way to ‘draw the line so we keep the open debate without the corrosive parts’ on social media. — AP

Trump said many things questioning the legitimacy of the 2020 election “that are corrosive”, Gates said on Fox News Sunday. “But the idea that you end up with a lifetime ban – that, it seems like we should discuss.”

“We don’t want to partition and have a social network for one party and another social network,” he said. “We want to have a common base where we’re exchanging ideas and thoughts.”

Twitter permanently suspended the @realDonaldTrump account last month, citing “the risk of further incitement of violence”, after Trump supporters stormed the US Capitol on Jan 6 in a bid to disrupt the Senate’s certification of Joe Biden’s victory in the presidential election.

“There’s got to be some way that, between the government and the well-meaning actors, we draw the line so we keep the open debate without the corrosive parts,” Gates said. – Bloomberg