By Joe Light and Ben Brody The GameStop drama was the latest in a series of episodes in which social media users were alleged to have incited risky and dangerous activity, including planning the Jan 6 US Capitol insurrection and a plot to kidnap Whitmer. — Bloomberg

Market turbulence fuelled by a horde of retail investors targeting stocks like GameStop Corp has some fingers pointing at an unexpected culprit: the social-media liability protections vilified by former President Donald Trump.

The investors who sent shares of GameStop and several other companies to previously unfathomable heights relied on a Reddit-based forum as a central gathering point to discuss trading strategies, egg each other on and move in unison to squeeze hedge funds that had shorted stocks. Regulators are examining whether any of their activity was illegal.

But even if it was, the social-media platform bears little risk from its users’ activity, thanks to a shield from lawsuits known as Section 230 – which Congress passed to override a court decision in a lawsuit brought against the brokerage firm featured in the 2013 Martin Scorsese blockbuster The Wolf Of Wall Street.

That provision of the 1996 Communications Decency Act is already under scrutiny in Washington from Republicans, who contend it has allowed social-media firms to discriminate against conservatives, and from Democrats, who say the networks have hidden behind its protections rather than crack down on dangerous behaviour.

The rally came to a screeching halt this week with shares of GameStop down more than 80% from last week’s high. Now, the US Securities and Exchange Commission is investigating whether anyone might have broken the law, for example by lying to raise the price of GameStop shares, only to sell their own shares in a so-called pump-and-dump scheme.

Treasury Secretary Janet Yellen will meet on Thursday with the heads of the SEC, the Federal Reserve and the Commodity Futures Trading Commission to discuss the recent volatility, the Treasury Department said in a statement on Wednesday night. The House Financial Services Committee has also scheduled a hearing for later this month to examine the issue.

“Reddit’s site-wide policies prohibit posting illegal content or soliciting or facilitating illegal transactions,” said a Reddit spokeswoman in an email. “We will review and cooperate with valid law enforcement investigations or actions as needed.”

If regulators find that some users went too far, Section 230 would largely insulate Reddit from liability. That has some social-media experts asking if Section 230 harms financial markets. Some say it’s unlikely a lightly moderated forum such as Reddit would even exist without Section 230, let alone allow the sort of speculation and stock promotion that saw GameStop shares rise 1,700% in a matter of days.

Without the act, “platforms would have to become more responsible – almost overnight”, said Dipayan Ghosh, a former Facebook Inc official and a White House technology policy adviser in the Obama administration. “And that wouldn’t be a bad thing,” said Ghosh, who is now a fellow at Harvard Kennedy School’s Shorenstein Center on Media, Politics and Public Policy.

Reddit has lobbied Congress, including the House Energy & Commerce Committee that oversees tech policy, in support of keeping Section 230 intact, according to a person familiar with its efforts. Reddit has only been lobbying for about four years, relying on outside lobbyists. It spent about US$200,000 (RM811,700) a year in the past three years and US$60,000 (RM243,510) in 2017, its first year, according to its disclosures.

In an ironic twist, Section 230 itself was created in part as a response to shady stock schemes. In 1995, the brokerage founded by Jordan Belfort, who was played by Leonardo DiCaprio in the film, The Wolf Of Wall Street, sued an anonymous online bulletin board poster for disparaging Belfort’s firm. The lawsuit included a now-defunct Internet service provider, Prodigy, as a defendant because it hosted the forum.

The judge ruled that Prodigy could be held liable for its users’ content because it had actively sought to moderate the forum, sometimes by taking down posts. Fearing that the ruling would prompt nascent platforms to avoid liability by leaving up all content, lawmakers proposed what eventually became Section 230 in a law that aimed to regulate indecent material online.

The Reddit rebellion arose from a confluence of the social-media revolution brought about by Section 230, wildly popular apps that allow free stock trades, millions of pandemic-bored retail investors and long-festering antipathy toward Wall Street kingpins.

Experts say that much of what users of WallStreetBets, the Reddit channel favoured by stock traders, have posted doesn’t appear to be illegal. The forum now has more than eight million users, many of whom spew stock tips, engage in sometimes-juvenile banter and celebrate unbridled greed. None of that is against the law. It’s also not a crime to say that you own stock and think it will continue to rise.

Unless regulators find violations, Reddit probably won’t need the protection that Section 230 affords, said Eric Goldman, a professor at the Santa Clara University School of Law. “I haven’t seen any evidence that illegal stock manipulation is taking place on WallStreetBets, though that might still be proven,” Goldman said.

Still, without the federally protected sandbox of Section 230, Reddit and platforms like it would likely have been unable to grow into the wild-west of free speech that they are, said Ellen Goodman, a professor at Rutgers Law School who has studied online disinformation.

“If we had less Section 230 immunity, I suspect the platforms would be more engaged and Reddit would have been more engaged in monitoring and slowing down the traffic on WallStreetBets,” Goodman said.

Just as financial markets include trading halts for volatility, Goodman suggested platforms could take action to slow down viral disinformation when they see it.

“Let’s just imagine there is evidence that says someone was attempting to run a pump-and-dump scheme online,” said Matt Schruers, president of the Computer & Communications Industry Association trade group, which counts Facebook and Twitter, but not Reddit, as members. “Regulators already have the tools that they need to penalize bad actors for engaging in that kind of securities fraud.”

The GameStop drama was the latest in a series of episodes in which social media users were alleged to have incited risky and dangerous activity, including planning the Jan 6 US Capitol insurrection and a plot to kidnap Michigan Governor Gretchen Whitmer.

While the GameStop incident didn’t involve threats of violence, and may not have even involved anything illegal, it could still give momentum to bipartisan efforts to increase social-media companies’ responsibility to moderate what users say.

Illinois Democratic Representative Jan Schakowsky, who chairs a House panel on consumer protection, is pushing to tighten Section 230 by forcing companies to police their own terms of service more aggressively. She is also looking at whether there are legal violations amid the WallStreetBets activity that are being protected by the shield, according to an aide familiar with her plans.

Lawmakers have offered measures to reform the legal shield, including by increasing transparency about how platforms make content decisions and forcing them to remove content deemed illegal by a court. Other proposals would eliminate child abuse material and illegal drug sales.

Trump frequently attacked Section 230, which he claimed enabled tech companies to shut down conservative speech. His Justice Department issued proposed changes to the law, and his allies introduced a flurry of bills on the issue. He prompted the Federal Communications Commission to prepare rules to limit companies’ ability to deal with political content, although it has since abandoned the effort. Trump also vetoed the annual defense authorisation measure because it didn’t include a repeal of Section 230, but Congress overrode him.

While Wall Street has largely stayed out of the political debate over Section 230, that could change now that its profits are at stake. Increasing internet companies’ liability for user posts could ultimately benefit markets if it leads the platforms to better police their content, said Joshua Mitts, a Columbia Law School professor who studies market manipulation.

“Liability could be a good thing because it could curtail the situations where scare or euphoria tactics are used to make money,” Mitts said. “If it turns the platforms into more active police, it may be a good thing on balance for our markets.” – Bloomberg 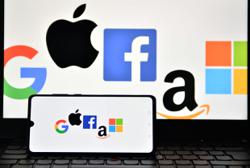 What happens to our digital data when we die?
Hawaii man sentenced to supervision over Utah cyberstalking
Bang for the buck: Mobile Legends Bang Bang
Tech tools help deepen citizen input in drafting laws
Bitcoin price lower after Musk tweet
More ransomware websites disappear in aftermath of Colonial Pipeline hack
Bitcoin rises 5.6% to $49,337.72
Tesla crash victim lauded 'full self-driving' in videos on Tiktok
Fifteen apps parents should be aware of: Are any of these on your child’s phone?
My dad wants to invest in Bitcoin. Should he?