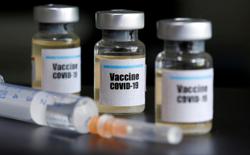 LONDON (Reuters) - Members of the British public who are not yet eligible for COVID-19 vaccination have been able to book appointments in state-run facilities to get the vaccine by using a loophole in the booking system, London's Evening Standard reported.

Britain has vaccinated more than 4.6 million people against the disease so far, working through a strict priority list starting with the elderly, vulnerable and frontline workers.

However, people who do not fall into those categories have been able to book appointments at several vaccinations centres by using direct links to the booking system shared through private messaging and social media, the paper reported.

The booking, which was subsequently cancelled by the newspaper, required only basic personal information to be provided, they said.

National Health Service England, which is running the vaccination programme, said people attending for appointments at the Westfield centre would be asked for proof that they had personally been invited for a shot and were in one of these priority cohorts.

That was "to ensure that no one who is currently ineligible for the vaccine receives it as a result of making a false online declaration," NHS England said in a statement.

However, it did not directly respond when asked whether anyone who had used the links had received a vaccine, when it was made aware of the issue with the booking system, and how widely such links had been used.