A survey found that 20% of companies admitted having a security breach as a result of a remote worker, while 18% said that cybersecurity was not a priority for their employees. — vectorjuice/Freepik

With the new year rolling in and a new normal settling in, technology across various sectors are adapting and deciding where to go moving forward. Here are some predictions as to where they might go in the near future:

Many office workers – at least those who are not required to deal with people face-to-face – have instead found themselves working from home (WFH).

Advisory firm Deloitte’s Tech Trends 2021 quoted research on the United States where those based out of a home office setup shot up from 15% pre-pandemic to 50% during the pandemic.

While WFH is already the new normal for many, Deloitte reported there was more to be done in rebooting the digital workplace. 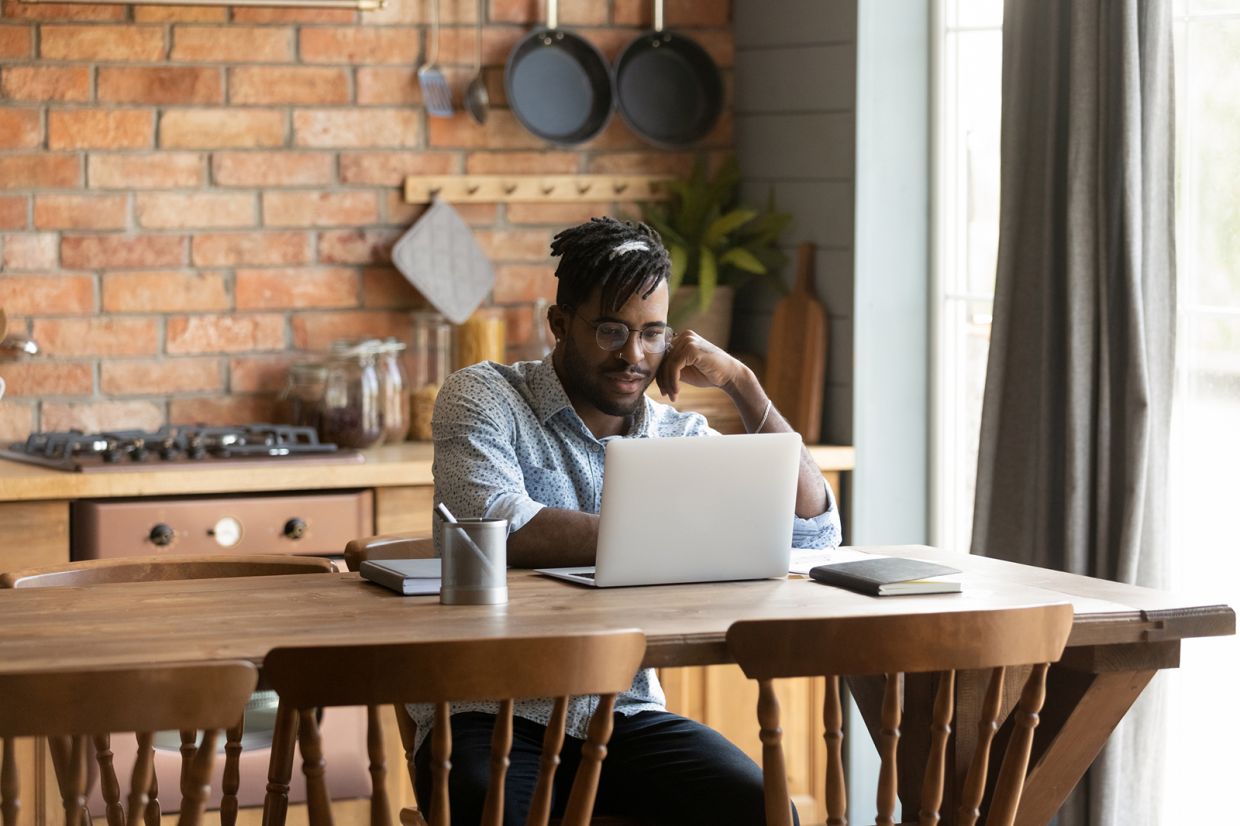 Despite employers’ concern on the impact on productivity and innovation, Deloitte found digital workplaces to be more measurable and manageable, with the right tools enabling companies to identify patterns, encourage positive employee behaviours and fine-tune individuals’ or teams’ performances. — Dreamstime/TNS

Despite employers’ concern on the impact on productivity and innovation, the firm found digital workplaces to be more measurable and manageable, with the right tools enabling companies to identify patterns, encourage positive employee behaviours and fine-tune individuals’ or teams’ performances.

It also advised against video conferencing using the typical grid boxes, citing a study that found it stressful and fatigue-inducing. Instead it suggested using virtual or augmented reality to simulate collaboration environments where everyone is present, like in an online video game.

“Workplaces will shift from a place where people work to a place where teams meet, socialise, and connect. The smart money is on flexible and configurable work environments, technology-driven workplace services, and new ways of managing fewer people and less space without sacrificing collaboration and innovation,” predicted Deloitte.

The return of PCs

Now that people were spending more time at home, they were also starting to upgrade their home PC rigs, noted the International Data Corporation (IDC).

According to its report “Worldwide Quarterly Personal Computing Device Tracker”, the second quarter of 2020 saw global shipments of the traditional PC market – consisting of desktops, notebooks, and workstations – growing 11.2% year-over-year, reaching a total of 72.3 million units. 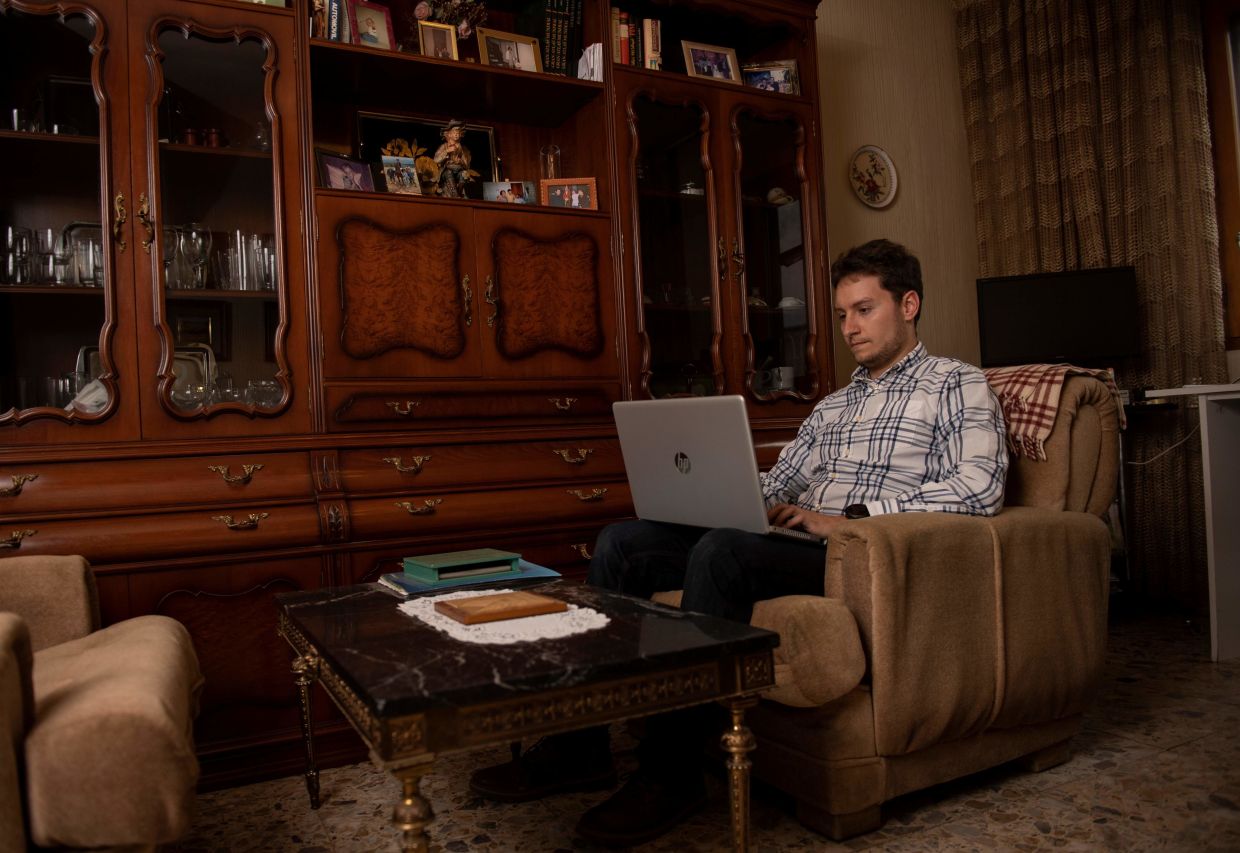 Now that people were spending more time at home, they were also starting to upgrade their home PC rigs, noted IDC. — AFP

As PC manufacturers managed to overcome logistics issues arising from the onset of the pandemic, IDC found the cost and frequency of both air and sea freight was closer to pre-Covid levels, while PC production was ramping back up too.

IDC’s worldwide mobile device trackers research manager Jitesh Ubrani stated that strong demand was driven by WFH and e-learning needs, though he warned a post-Covid-19 recession could push numbers back down.

The promise of 5G

Beyond PCs, 5G smartphone shipments had also grown 82% quarter-on-quarter in the third quarter of 2020, according to industry analysis firm Counterpoint Research.

As 5G promises radically faster transfers of data and much lower “latency” than 4G, it could potentially revolutionise a multitude of products and services, from self-driving cars to video games and telemedicine, according to a report by AFP. 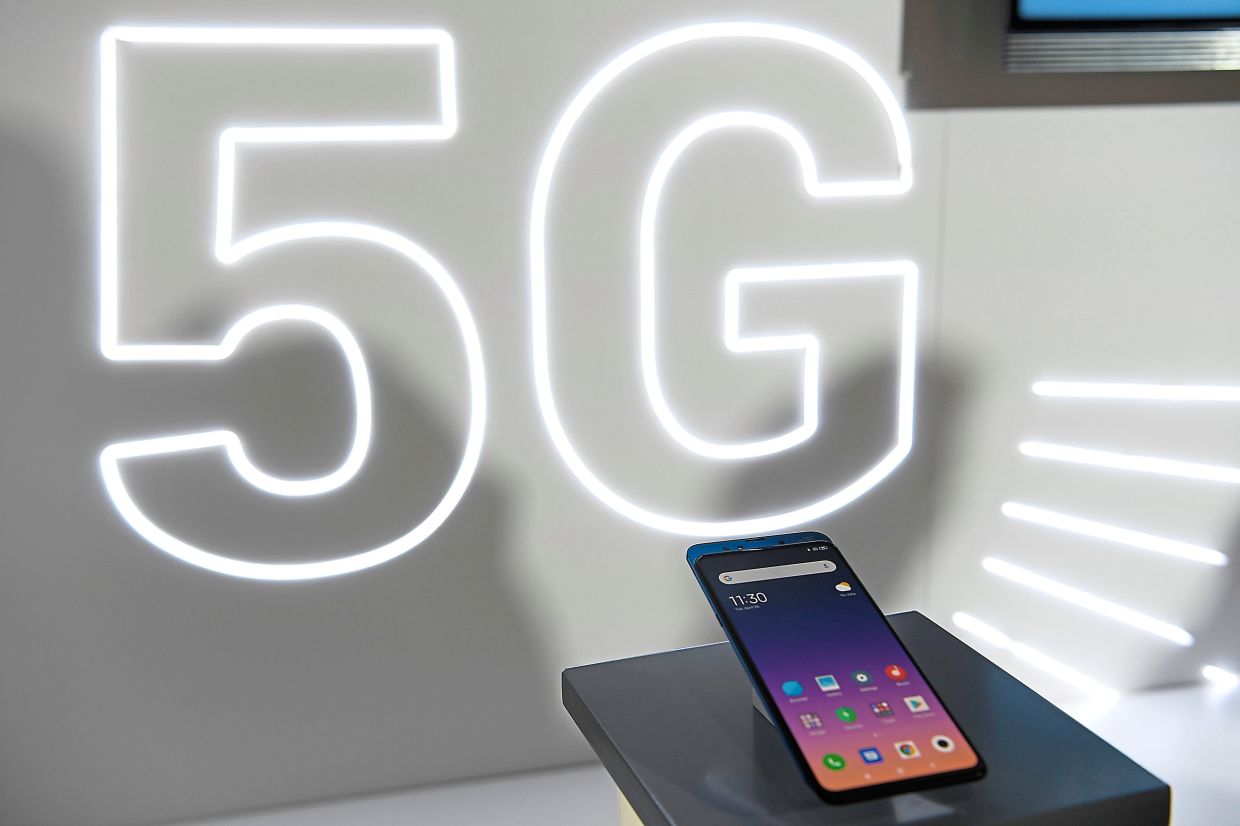 Beyond PCs, 5G smartphone shipments had also grown 82% quarter-on-quarter in the third quarter of 2020, according to industry analysis firm Counterpoint Research. — AFP

Practically speaking, this means that users will be able to, say, download (legally, of course) a high-definition movie in a matter of minutes, compared to the hour or so it takes now.

Similarly, “Internet of Things” devices like smart appliances, lighting and other smart-home technologies could also get a big boost from 5G.

Another advantage of lower latency – namely “the time that passes between a command being sent by a user and a device acting on it”, as defined by AFP – is that self-driving cars might finally get to be deployed more widely. However experts point out that this would require 5G networks to blanket large areas, which could take some time to achieve.

Indeed, local 5G availability may still be a few years away, with Communications and Multimedia Minister Datuk Saifuddin Abdullah saying its rollout is likely only to start by 2022 or early 2023, according to a Bernama report.

Over 2021, the National Digital Infrastructure Plan (Jendela) would instead be focusing on laying down the roots of telecommunications connectivity: a beefed up fibre infrastructure.

The Malaysian Communications and Multimedia Commission (MCMC), which manages Jendela, targets 1.2 million premises and homes with fibre connectivity this year.

To help achieve this, it has put out a call for tenders to deliver 1,661 telecommunication sites nationwide. This tender process comes with a budget of RM4.6bil and is expected to close by March 31.

Broader deployment of new networks also meant phasing out the older 3G network, expected to be completed by the end of the year. MCMC stated the spectrum allocated to 3G would be reused for 4G networks instead.

The fight against ransomware

While working from home has kept employees safe from the pandemic, cybersecurity firms noted this has opened up companies to more online attacks, particularly ransomware. 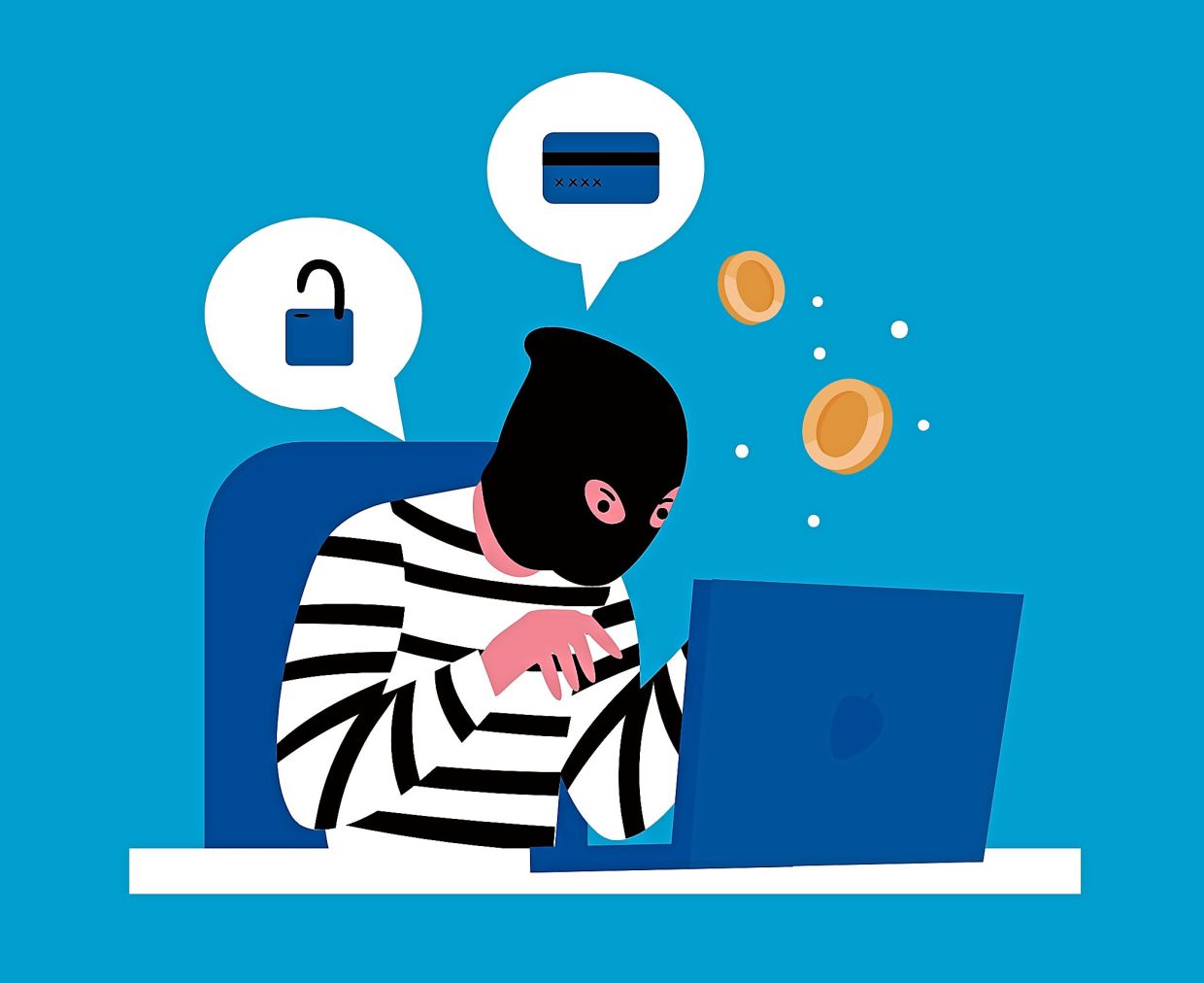 Ransomware is expected to increase as WFH employees are seen as an entry point to hack into corporate systems. — Vector by Freepik

Malwarebytes Labs’ “Enduring from Home: Covid-19’s impact on business security” survey found that 20% of companies admitted having a security breach as a result of a remote worker, while 18% said that cybersecurity was not a priority for their employees.

It said many companies failed to secure their RDP services against unauthorised access, enabling hackers to use social engineering or brute force attacks to gain access to employees’ computers and in turn, compromise the company.

In a ransomware attack, the hacker will typically hold a victim’s data or network ransom, stopping them from accessing it. For instance, a victim could be locked out of their computer or website until paying the ransom. 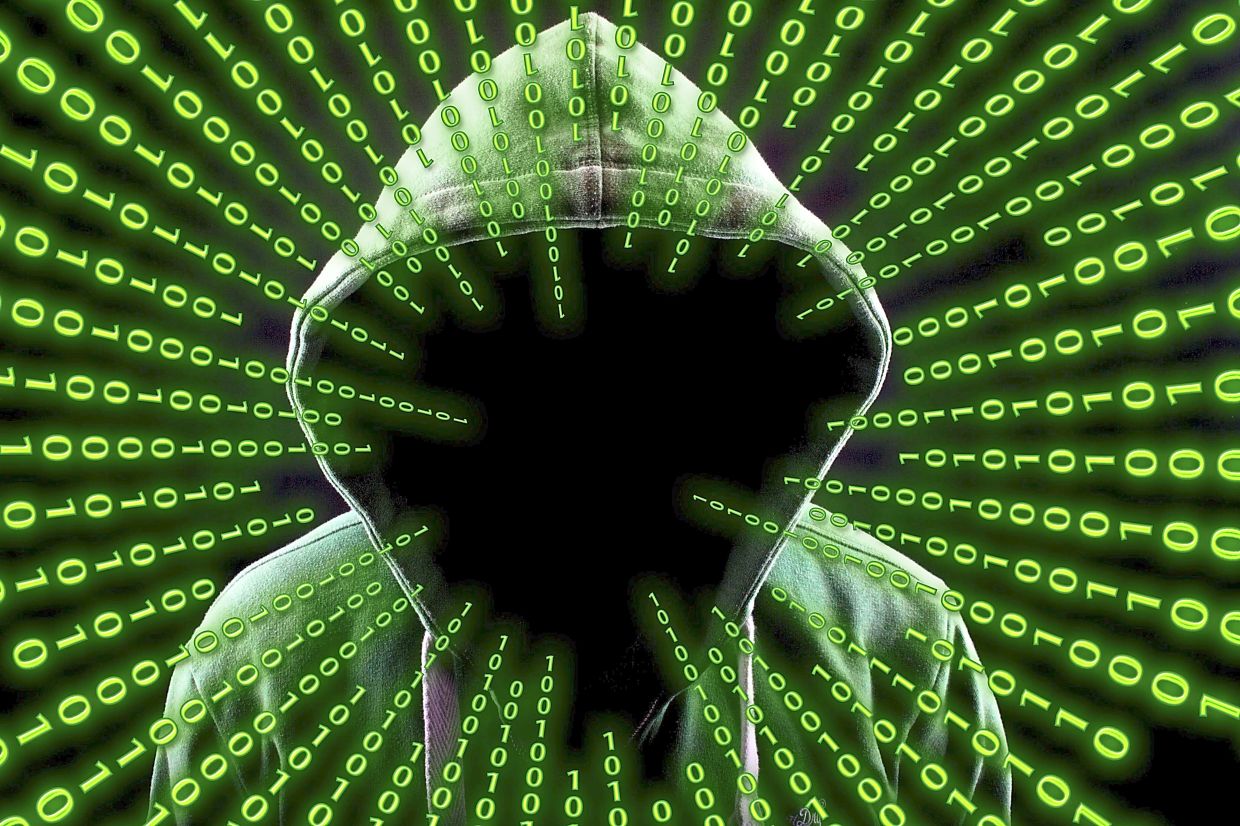 A survey by the firm reinforced this, finding that 51% of respondents in the Asia Pacific region agreed that a company’s online reputation is essential, while 48% said they avoid companies that had been involved in a scandal or received negative news coverage online.

It’s not just cybercriminals that are after user data in order to manipulate people, with companies and governments also joining the bandwagon.

Research advisory firm Gartner defined the trends as the Internet of Behaviors (IoB), where public or private entities were capturing the “digital dust” of people’s lives and using it to influence behaviours.

It said the data could come from a range of sources, such as commercial customer data, social media and even facial recognition.

It added that more types of data was becoming available, as well as technology that could stitch it all together and provide insights on the people being spied on.

“IoB presents significant and pervasive social and ethical implications. Collecting data to influence behaviours has the potential to be a powerful tool, and its social reception might depend on just how heavy-handed organisations are with what they’re trying to do,” said Gartner in its Top Strategic Technology Trends for 2021 report.

The firm said IoB must offer mutual benefit to both parties or risk being rejected by consumers.

It added that those executing such strategies must also be mindful of local privacy laws. This could range from Malaysia’s Personal Data Protection Act to the European Union’s General Data Protection Regulation.

One positive example of IoB was usage-based insurance, where companies monitor customers and reward safe behaviour with lower premiums.

For example, telematics like vehicles’ onboard computers or GPS could inform insurance companies on how customers drive and whether they tended to speed over the limit, or if they tended to brake and corner safely. 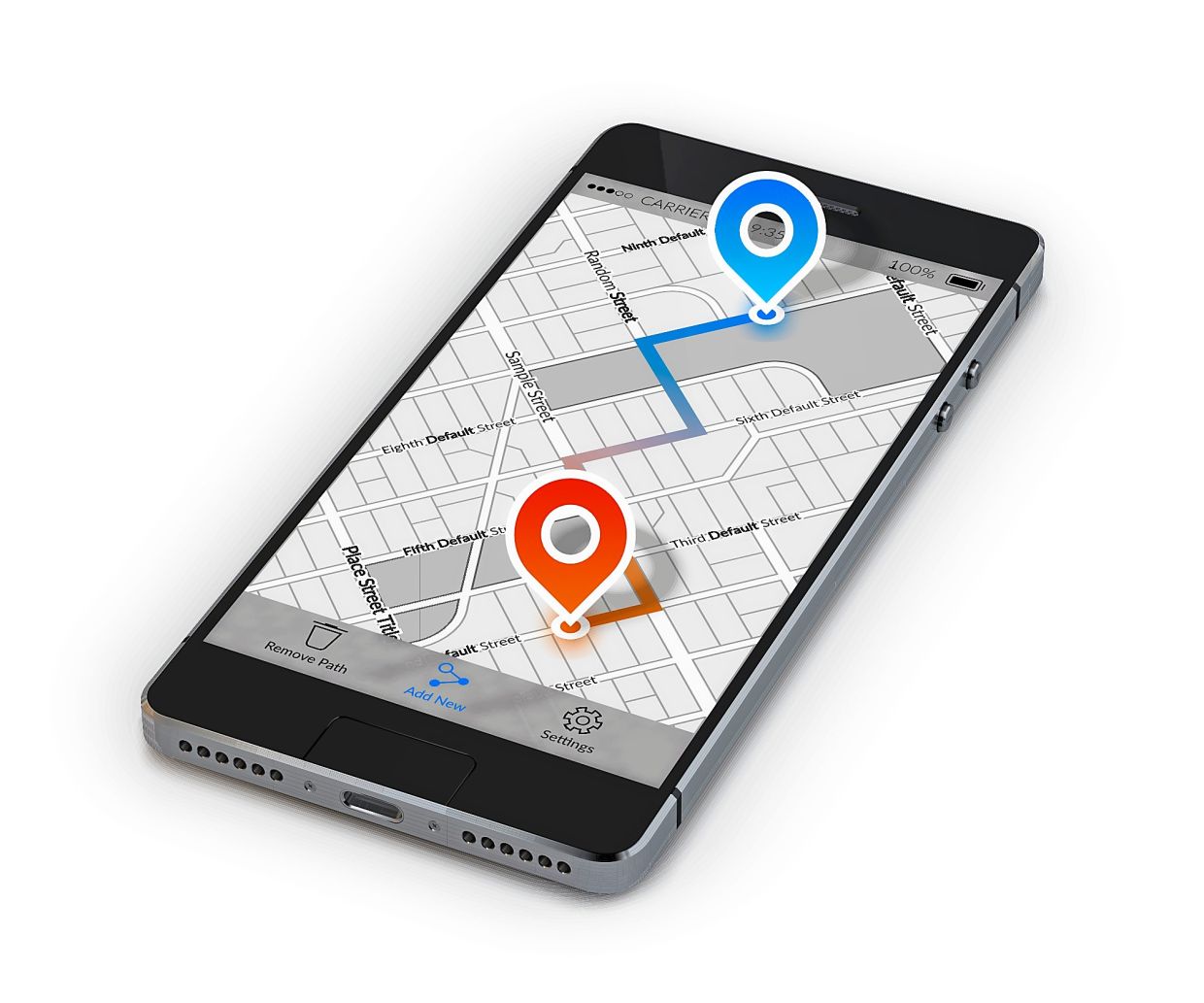 By analysing a ­vehicle’s onboard ­computers or GPS, insurance ­companies can see how their customers drive and price premiums ­accordingly. — Macrovector/Freepik

In Malaysia, Bank Negara introduced this as the “Liberalisation of Motor Insurance Business: Rewarding Good Risk Management” initiative, or colloquially called the “safe driver discount”, which enabled insurers to price products dynamically based on risk factors and competitive forces.

Though the initiative was kicked off late-2017, insurance firms and telematic solutions providers were still forming partnerships and exploring ways to offer this new style of insurance to customers.

Widespread access to user data and a capacity to influence how the public behave has however drawn scrutiny for some. Across the world, big tech companies are facing legal challenges by governments, anti-monopoly watchdogs and even other companies using their services.

The European Union is mulling two new laws – the Digital Services Act and the Digital Markets Act – to help regulate the business practices of tech companies.

The Digital Services Act would enable users and authorities to hold companies accountable and contact them for complaints. This could range from asking a video- sharing site to take down an offensive video to getting an e-commerce site to trace and take action against those peddling counterfeit products on its platform. 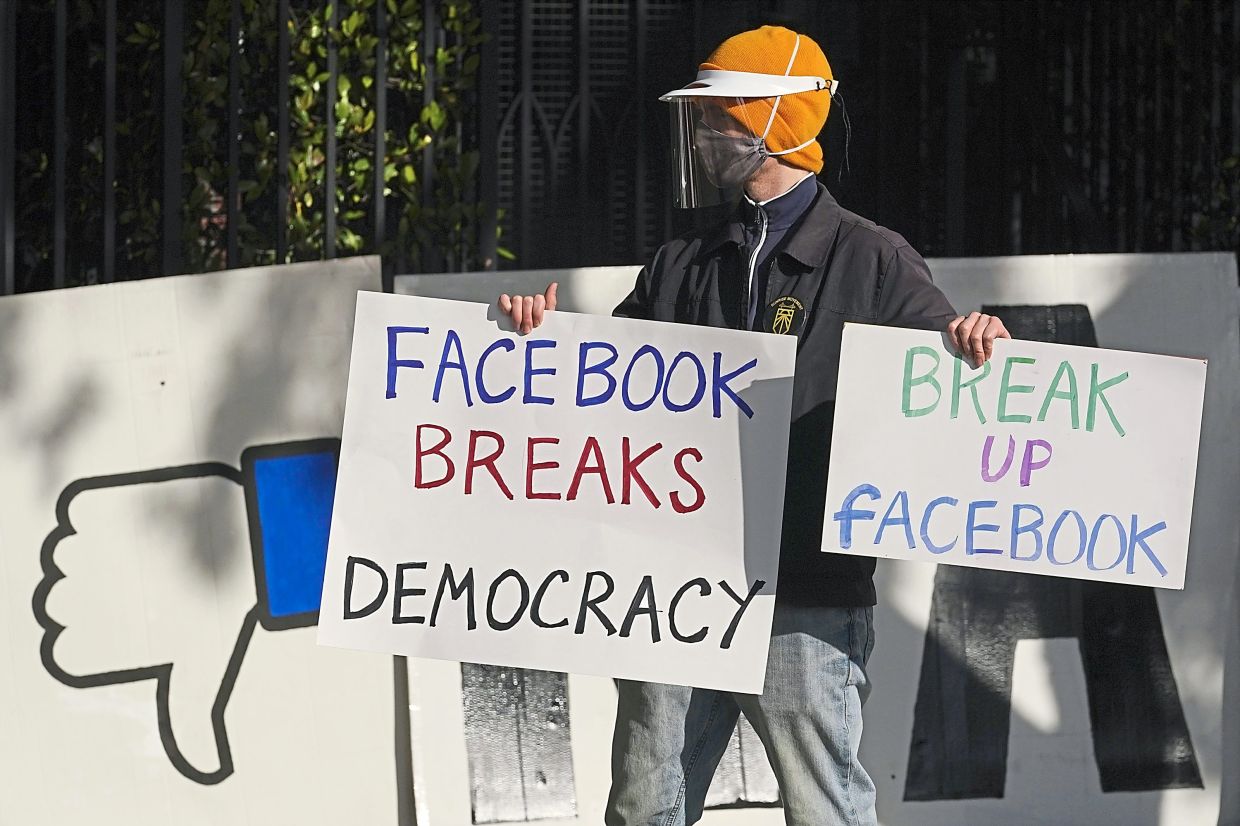 Protesters accused Facebook of being a platform for spreading disinformation. — AP

It attempts to curb companies from giving themselves advantages like buying other companies to form a monopoly, prioritising their own services and hiding rival services on their platform, or even forcing customers to use pre-installed apps.

The US Federal Trade Commission (FTC) and a big coalition of states have also sued Facebook, insisting that it broke antitrust law. The FTC also has Amazon in its sights.

The US Department of Justice (DOJ) has also sued Google for alleged violations of antitrust laws, calling the search engine company a “monopoly gatekeeper to the Internet for billions of users and countless advertisers worldwide”.

International financial authorities have set out to introduce a regulated, stable digital currency that would be accepted globally.

The Group of Twenty (G20) released a report “Regulation, Supervision and Oversight of ‘Global Stablecoin’ Arrangements” which defined a roadmap on the necessary regulatory framework and technology to create central bank digital currencies (CBDCs), by 2022.

The organisation, made up of finance ministers and central bank governors representing the European Union and 19 other nations, would be working with the International Monetary Fund (IMF), the World Bank and the Bank for International Settlements (BIS) on the project.

In a related report, seven central banks defined the design principles for CBDCs, including that it should be interchangeable with existing money forms and resemble cash in its ease of use, be impervious to cyberattacks and outages, while also complying with regulations and monitoring that apply to money already in circulation.