A file photo of a woman receiving a prepaid debt card for cash and food in a makeshift home in Lagos, Africa. GiveDirectly uses satellite data to identify poor areas, and then harness machine learning to comb mobile phone metadata to identify those living in extreme poverty. Potential recipients are contacted by phone and invited to apply for support. — AFP

LONDON: A US-based nonprofit that is using algorithms to identify people living in extreme poverty by analysing their mobile phone habits has made direct cash payments to 30,000 people as part of a pioneering project in Togo.

GiveDirectly worked with the government of the West African nation and experts at the University of California, Berkeley, for the high-tech approach to find some of the country’s poorest people.

They use satellite data to identify poor areas, and then harness machine learning to comb mobile phone metadata to identify those living in extreme poverty. Potential recipients are contacted by phone and invited to apply for support.

“More than half of Togo’s population lives on under US$1.90 (RM7.70) a day and Covid has really affected their incomes,” Han Sheng Chia, special projects director at GiveDirectly, told the Thomson Reuters Foundation by phone from New York.

The World Bank defines extreme poverty as a daily income of under US$1.90.

“Getting this instantaneous payout allows them to really meet a large part of their basic needs during such a challenging time,” he said, adding that people living on less than US$1.25 (RM5) a day were eligible for the cash payouts.

Men receive US$13 (RM53) per month for five months, while women are sent about US$15 (RM61) a month, reflecting the fact that they are often primary care-givers in their households, said GiveDirectly, which operates in several African countries.

The whole process is done using mobile phone, from the application to receiving a digital cash transfer to an account linked to their mobile number. The money can then be drawn out at local shops in cash if required.

Despite high rates of extreme poverty, some 90% of Togo’s population own a mobile phone, said a report from information agency EcoFin, and mobile-based payments are common.

The scheme, which launched in mid-November, aims to reach 60,000 beneficiaries in a first phase running until mid-2021.

As Covid-19 threatens to push 150 million people more into extreme poverty, Chia said the approach could provide a model for delivering aid quickly to the people most in need.

“Being able to enrol many of the world’s poorest really, really rapidly – that is in many senses the holy grail of a lot of international development and humanitarian work,” Chia said.

“Because 150 million people are about to be thrown into extreme poverty, because the scale is so large, we need to innovate. And we think this could be one of the new models.” – Thomson Reuters Foundation

Kenya to use space technology to boost disaster response to emergencies 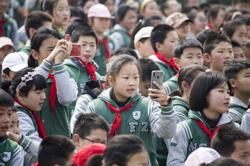