Madonna is trending on Twitter after fans mistakenly thought she had passed away instead of football legend Maradona. — AFP

Pop star Madonna is trending on Twitter with more than 120,000 tweets after users posted tribute messages for her instead of footballer Diego Maradona in the wake of the latter’s death.

Website News.com.au reported that it was a case of “mistaken identity” as some users thought Madonna had passed away instead of Maradona, as the two shared shared similar-sounding names.

Social media users posted tributes with one saying the pop star “will be remembered forever” and fans even left RIP (rest in peace) messages on her latest Instagram post.

It didn’t take long for others to remind fans that Madonna is in fact very much alive, while some imagined that the singer would be confused when she woke up and checked her social media.

Maradona passed away yesterday at the age of 60 (Nov 25) after suffering a heart attack. He was instrumental in guiding Argentina towards the coveted World Cup title in 1986.

One of his most iconic moments on the field came in a match against England when he deliberately used his left hand to punch the ball into the net, in what has since come to be known as the “Hand of God” goal.

News of his passing prompted an “outpouring of emotion” as his native country Argentina declared three days of mourning.

A star in our midst: When Maradona last visited Malaysia 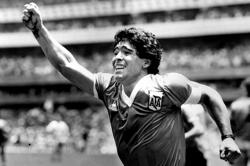