Many experts recommend starting your child off with a mobile phone without Internet access so that they can become familiar with it for texting and calling. — Zacharie Scheurer/dpa

It's been decided: Your child is finally ready for a mobile phone. Great – but then there's a cascade of other questions: Should they get a brand-new phone? How do you ensure they can use it safely?

Many experts recommend starting with a phone without Internet access so that they can become familiar with it for texting and calling.

Kristin Langer, a media coach with a German youth initiative, agrees, adding that parents should adopt a step-by-step approach to the mobile and digital world when it comes to their children.

"In order to understand the functions of a smartphone and learn how to protect themselves on the Internet, adolescents need time and the support of their parents," she says.

Children around the ages of 12 are usually able to figure out how to understand the Internet best and are also less susceptible to falling into traps or being tricked into buying something from an ad.

But all children have their own rhythm. And some kids – just like adults – are more likely to get stressed out by a phone than others.

Ideally, parents can give their child a relatively new used device, or a cheap entry-level model, says Blasius Kawalkowski from an online magazine. Cell phones made just for children are usually useless.

Iren Schulz, a German media coach, also advises against giving children the latest smartphone model. "For one, it is too expensive, and second, it may also be too much," she says. But models that are too old may no longer receive updates, and "the less they can do, the more often they're accidentally left on the bus or lost," she adds.

Media coach Annabelle Jueppner recommends letting children help out in the selection process and considering their needs, which can vary based on age. Is a camera important, for example? Or is it more about what games they can play while they're waiting for the bus to come?

In terms of the phone itself, Jueppner says that a model with a more stable design, ie a device with a metal frame or rubber backside, is best. It couldn't hurt to invest in a good protective case and screen display protector as well.

All smartphones have the possibility of setting up security and child safety measures, and there are also apps available that can filter your child's online searches. However, parents should explain their actions to their children and be transparent so they don't think they're being forbidden from doing everything, advises Jueppner.

"Especially for teenagers, parents should not interfere too much with their private sphere," says Jueppner, who says it's better to maintain open lines of communication and be available for questions.

Before giving children a phone, parents should establish some ground rules – for example, by deciding for how long each day the child can use the device for playing games, watching movies or chatting.

According to experts, primary school children should only spend an hour a day at most using a TV, computer or smartphone. – dpa 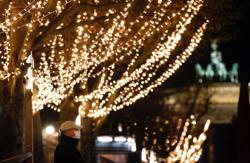