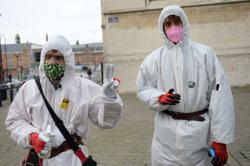 At a brokerage house in Shanghai in 2018. Chinese Internet stocks will keep outperforming their US counterparts in the months ahead. — AFP

Chinese Internet stocks will keep outperforming their US counterparts in the months ahead as regulatory challenges to America’s technology giants mount in Washington DC and Brussels, according to some investors.

Their reasoning includes expectations that weakening the US megacaps will help bolster the relative attractiveness of Chinese technology companies, which are continuing to invest in areas of growth. Meantime, the growing uncertainty over prospects for the US sector could send buyers to their cheaper Chinese peers which are still being championed by the government in Beijing.

"The structural trend for China tech remains intact,” said Edward Lim, chief investment officer at Covenant Capital Pte. in Singapore. The sector trades on lower valuations and with higher growth prospects than the United States and it faces lesser regulatory risk from its own authorities, he added.

The MSCI China Information Technology Index has risen 45% this year, versus a 32% gain in the Nasdaq Composite. It trades on 27 times 12-month forward earnings, compared to 32 times for its US counterpart.

The prospect of the Republicans losing the Senate in next month’s US election has focused attention on a report from the antitrust panel of the Democrat-controlled House Judiciary Committee last week, which recommended curbing the powers of US technology giants including Amazon.com Inc and Alphabet Inc’s Google. European Union regulators are also reportedly eyeing the sector for tougher regulation.

The adversarial stance in the United States and Europe contrasts markedly with the approach of Chinese authorities, who meet this month to draft their economic and social policies for the next five years. The Communist Party plenum is expected to roll out a fresh plan to nurture the domestic technology sector, according to Bloomberg Intelligence.

The plenum is likely to focus on migrating demand from goods to services and emphasise self-sufficiency in imports including electronics, which should bolster the case for owning stocks in the technology sector, according to Tai Hui, chief market strategist for Asia-Pacific at JPMorgan Asset Management. "That’s been a theme we’ve been advocating for some time and it would be nice for the 14th Five-Year Plan to reiterate,” he said.

The United States is in a "blood sport race” with China over technology and the economy, and companies like Alibaba Group Holding are likely to continue investing billions of dollars in artificial intelligence, cloud computing and 5G networks, said Robert Gillam, chief executive officer at McKinley Capital. "Is China going to dismantle their national champions?”

To be sure, there has been no shortage of attacks on Chinese tech companies by the Trump administration leading up to the election.

And for McKinley’s Gillam, the success and continued investments of China’s tech stars makes it unlikely that Congress will seek to rein in America’s tech titans.

But from the antitrust standpoint, Chinese technology stocks have less risk compared with their US peers, which is positive for their performance in the months ahead, said Jian Shi Cortesi, a fund manager at GAM Investment Management in Zurich.

BNP Paribas Asset Management’s senior investment strategist Daniel Morris agrees, and suggested that the Democrats pose a bigger threat to the technology sector than the Republicans, in a recent interview.

"More regulation, generally you’d assume, would benefit Chinese technology companies,” he said. "You’re weakening the US behemoths, and that should provide an opportunity.” – Bloomberg