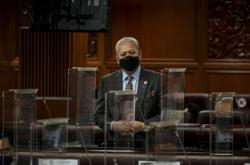 Saifuddin (second from left) and TM chairman Tan Sri Mohd Bakke Salleh had a video call session with Veveonah (on screen) during an event in August. — Bernama

The Communications and Multimedia Ministry (KKMM) released a statement today reiterating the government’s commitment to improving the connectivity and quality of Internet service in Sabah under the National Digital Network plan (Jendela).

KKMM Minister Datuk Saifuddin Abdullah said that the initiatives will also benefit people in the Pitas district, which came under the spotlight after 18-year-old Universiti Malaysia Sabah (UMS) student Veveonah Mosibin shared a video on YouTube detailing how she had to study atop a tree to achieve stable Internet connectivity for her online examinations.

Veveonah’s video received widespread attention as it revealed how poor Internet connectivity added to the struggles that some students in rural areas have to go through for e-learning during the movement control order in Malaysia.

Under the Jendela initiative, which was previously announced by Prime Minister Tan Sri Muhyiddin Yassin on Aug 29, 17 communication towers have been allocated for Pitas where seven towers have already been built, two are still under construction while eight more are being planned.

One of the towers that is currently under construction is close to Kampung Sapatalang where Veveonah shot her viral YouTube video. The Ministry said the tower, which is expected to be completed in the second quarter of 2021, will provide 4G network coverage to the community in the area.

Six transmitters in Pitas have completed upgrades to provide 4G network while 18 more are in the process of being upgraded to 4G, according to the statement.

Saifuddin added that Telekom Malaysia, which manages a Pusat Internet in Kampung Pinggan-Pinggan (located 11km away from Kampung Sapatalang), has upgraded the broadband speed through fiber optics to provide speeds of up to 300Mbps.

The Minister said Sabah is one of the biggest benefactors under the Jendela initiative, where the state has also been proritised for communications infrastructure upgrading works from this year till 2022.

“Some of the projects that are underway include the planned construction of an additional 382 communications towers as well as the upgrading of 924 transmitters at existing towers,” Saifuddin said in the statement.

Apart from that, 35 new towers and 1,048 transmitters on existing towers will be upgraded commercially by service providers to improve 4G coverage while 251,116 premises will be fitted with fibre optic network, he added. 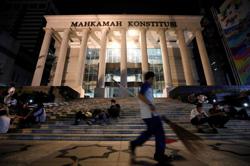