MEXICO CITY: A tortilla shop has started giving free WiFi and television access for kids in its Mexico City neighborhood whose homes don’t have them, or whose brothers and sisters are already using the services for remote learning during the pandemic.

Mexico’s government schools started at-distance classes Aug 24 using televised lessons due to the coronavirus, because 94% of Mexican homes have TVs. But there are often many youngsters in a Mexican family and they all need to look up something online or watch classes at the same time.

That is where the "Rinconcito de Esperanza” – the Corner of Hope – comes in. The owners of Grandma's Tortilla Shop in the southern borough of Tlalpan set up learning areas to offer free tutoring, TV and computer access.

The assemblage of space spills out of the store into a tent set up on the sidewalk outside, and continues into the bed of an old pickup truck parked at the curb. A true community effort, classes that need more room or quiet are held in neighbouring shops.

Dalia Dãvila and her companion, Fernando Lozano, set up the informal non-profit project at their tortilla shop after she heard neighbours and friends worrying about how their children were going to keep up with classes. Initially it started with a single bulky TV and the store's WiFi, but when the TV burned out in a rainstorm, neighbours came to her aid by providing a new television set and other items.

"We saw how worried they (mothers) were, thinking: ‘Either I work, or I educate my children, and if I help my child with their classes, how are we going to eat?’” said Dávila, who continues to bake and sell tortillas while overseeing the project. "So we neighbours started organising to help out.”

There is a box of textbooks, one smartphone, one tablet and a laptop, all donated. "People have brought pencils, donated notebooks and even brought donated grain for food packages,” Lozano said.

The spaces serve about 50 children each day, and classes are staggered to avoid crowding together children from different families. Volunteer tutors come to teach classes in English, math and the sciences.

"We saw there was inequality right now, because of the pandemic. A lot of parents don't have money to buy a telephone, a television or a computer,” Lozano said. "The truth is that if you miss out on a year you never make it up. And the truth is we are not talking about one or two children, we are talking about millions of kids all over the world, and this is going to have real repercussions.”

The government has distributed some 140 million free textbooks, and homes that have no television can listen to radio classes. Students will not return to classrooms until the government’s version of a stoplight to evaluate the pandemic’s risk is safely at green.

Only 44% of Mexican households have a computer. A slightly higher percentage, 56%, have some sort of Internet service, though many of those connections are used just for smartphones. According to polling, 95% of people in Mexico say they use the Internet for phones, 33% with a laptop and 29% for a desktop computer.

Most households have more than one child, often taking classes simultaneously and putting a strain on TV and computer access.

María Luisa Moreno Barajas, a mother of four whose husband is unemployed, brought her young son José Mario to study at one part of the improvised learning area that spills over into a neighbouring ironworker’s shop.

José Maria isn’t disturbed at all by the unusual surroundings. "I feel as if I was in school,” he said.

"This project has helped us a lot,” his mother said. "We do have Internet that my father lent us, but because there are a lot of us, we're all using the Internet at the same time.”

"So there are times when we can't do all research we need to do,” she said. "That's why I come to the Corner of Hope. If we need to do homework on the Internet or print off something, there is someone who can help us.”

Manuel López Pereyra, a researcher in the education department of Mexico City’s Iberoamerican University, said such community efforts are great, but they illustrate what the government hasn't done.

"One of the education policies that we would expect is for the government to help these families that don't have access to technology,” he said. "But now, when we are in a moment of crisis and the government is not giving us what we need, the community is who is coming to save the day.” – AP 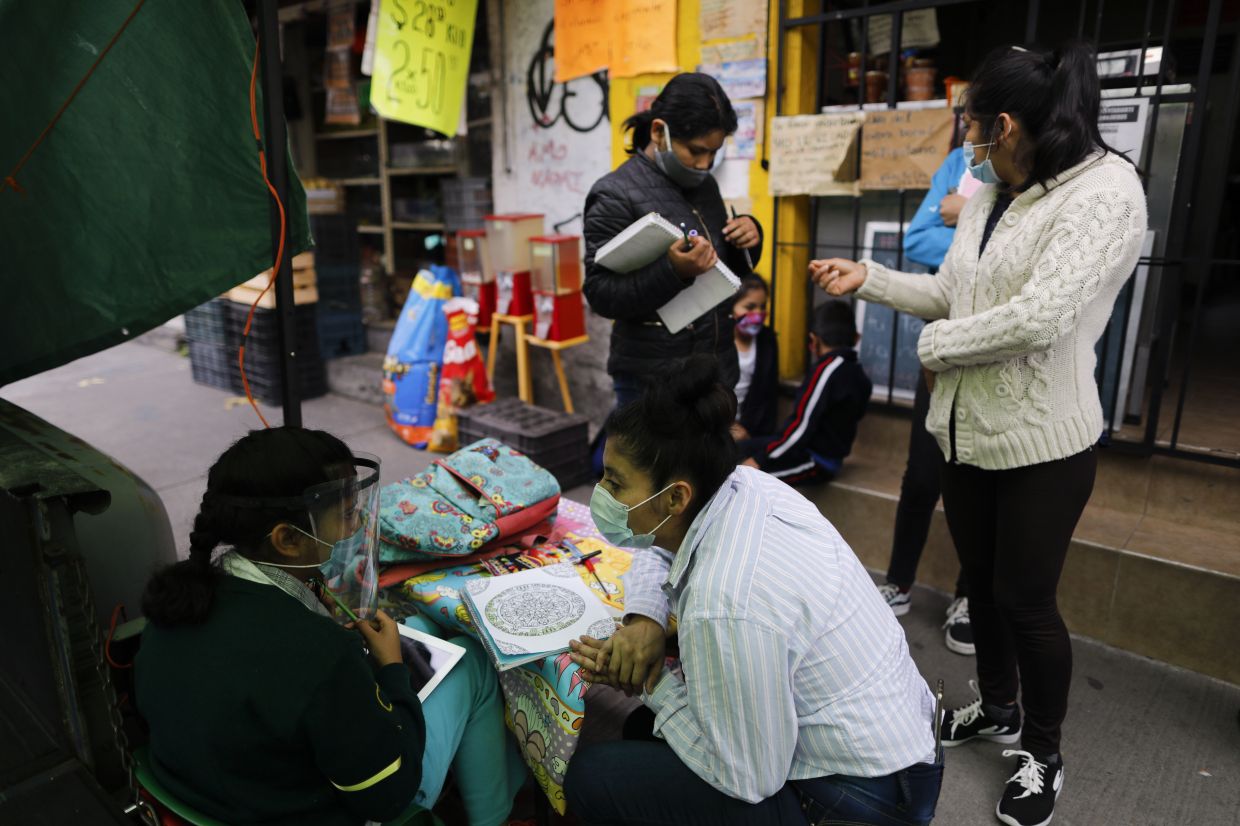 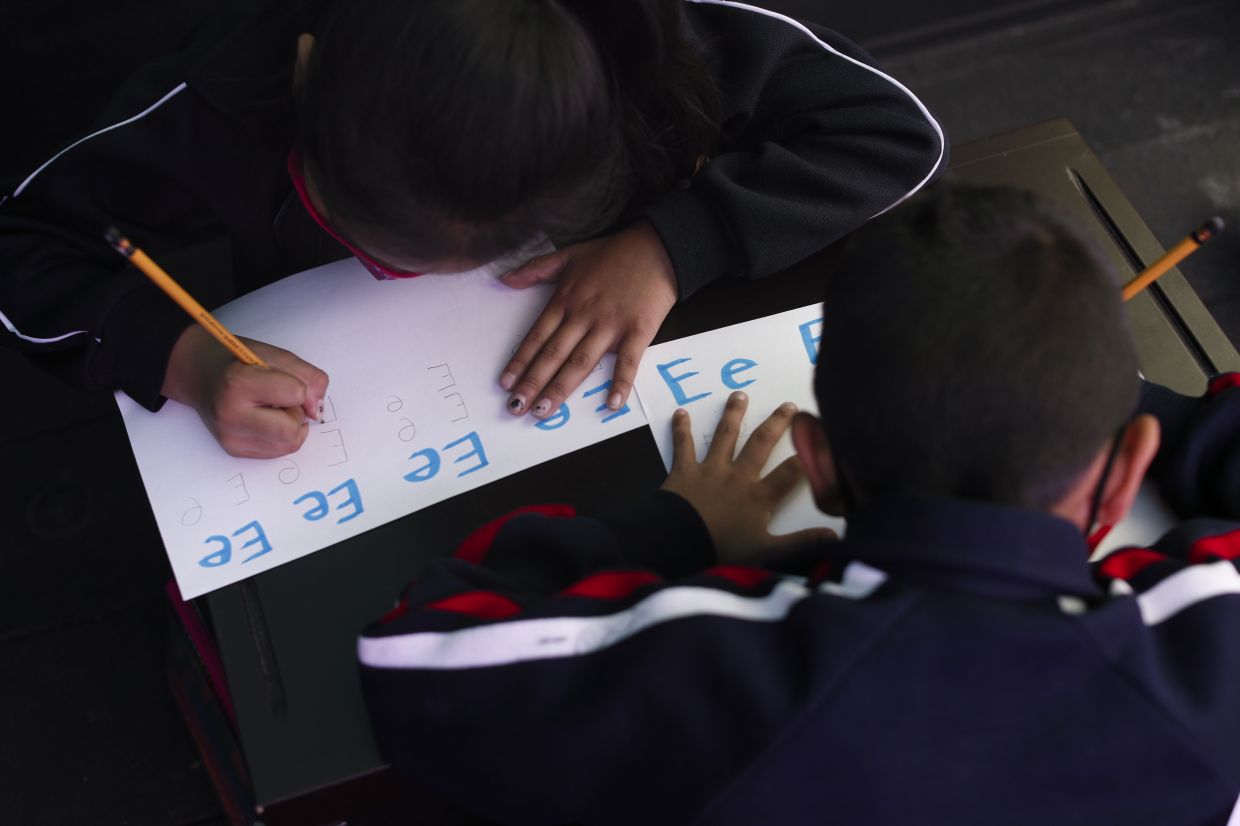 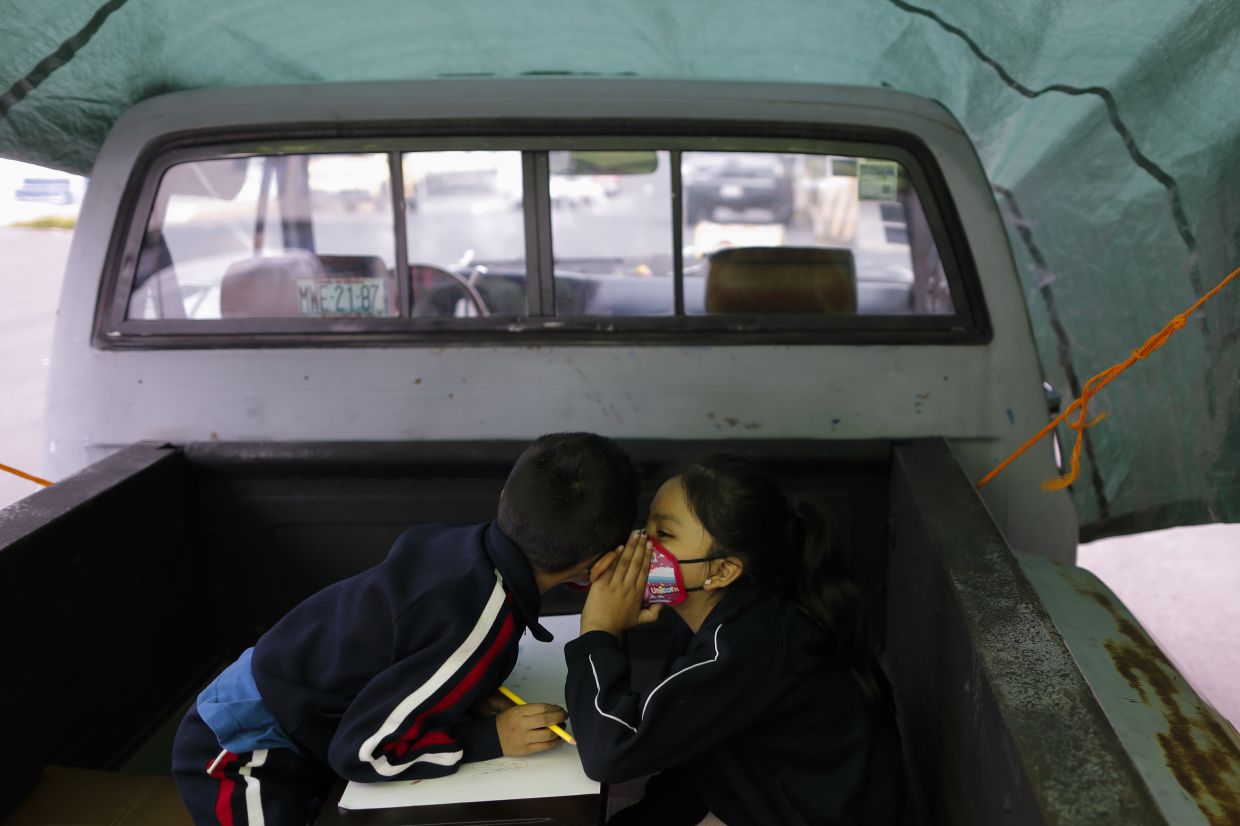 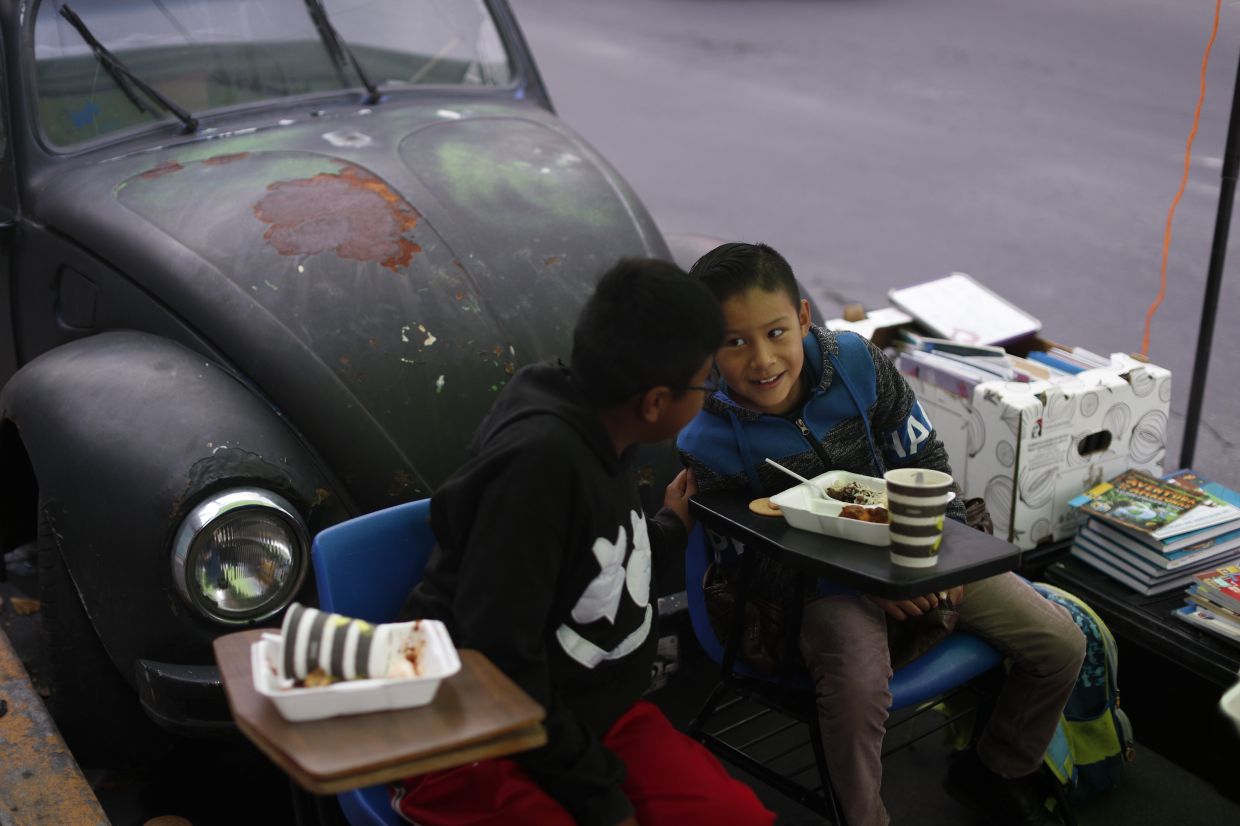 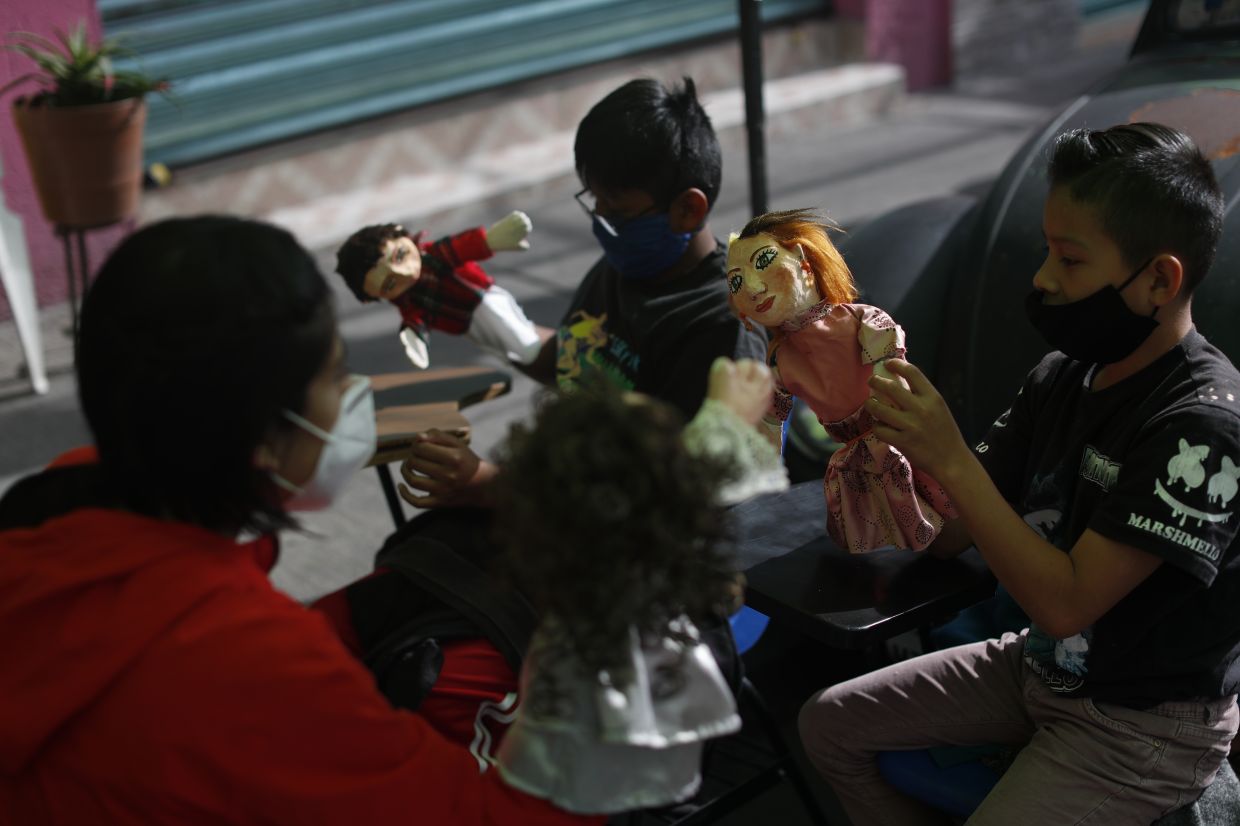 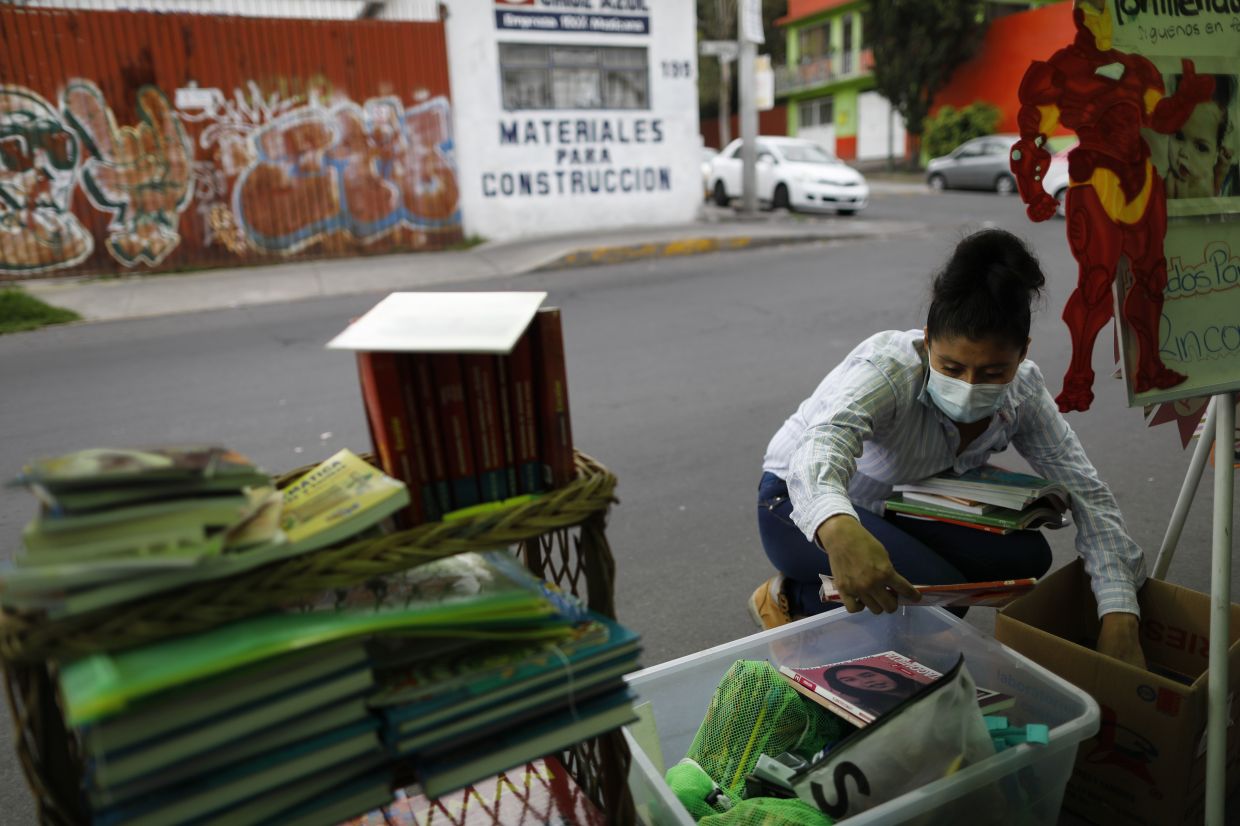 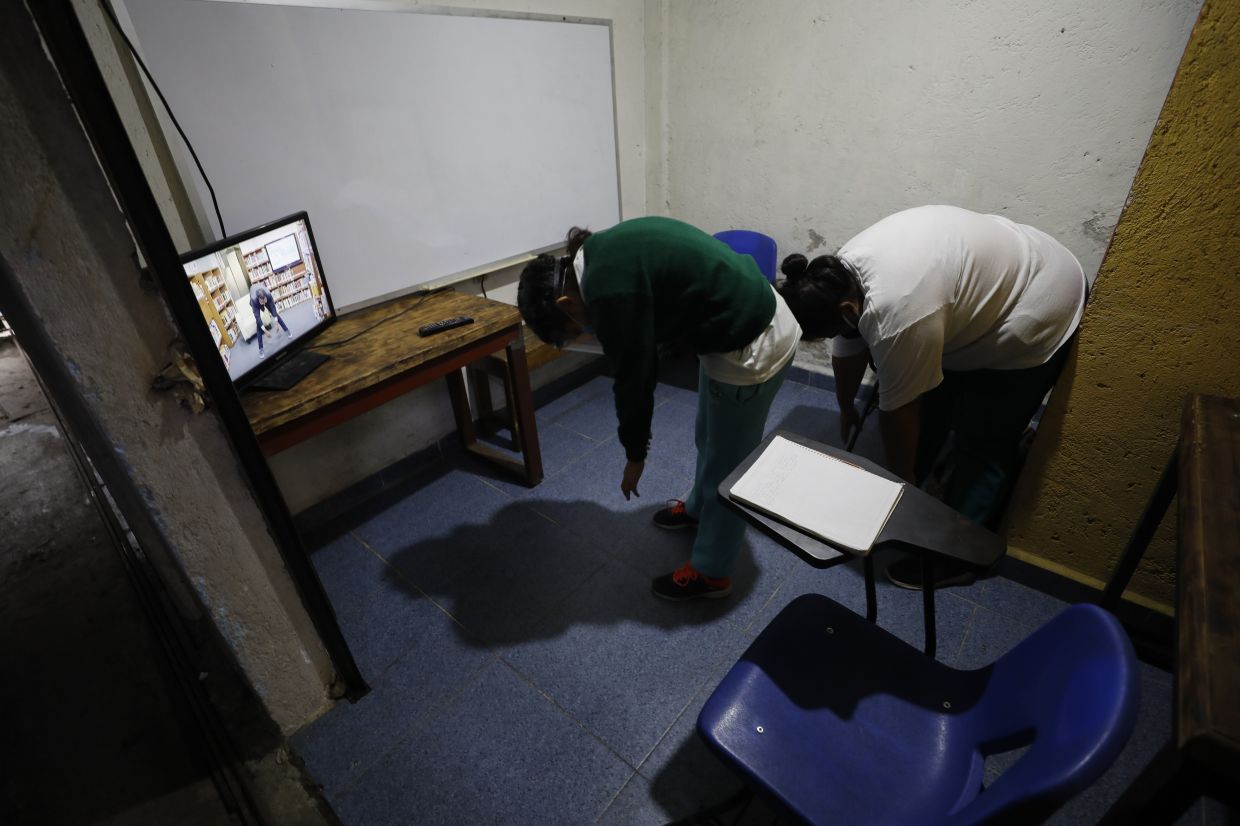 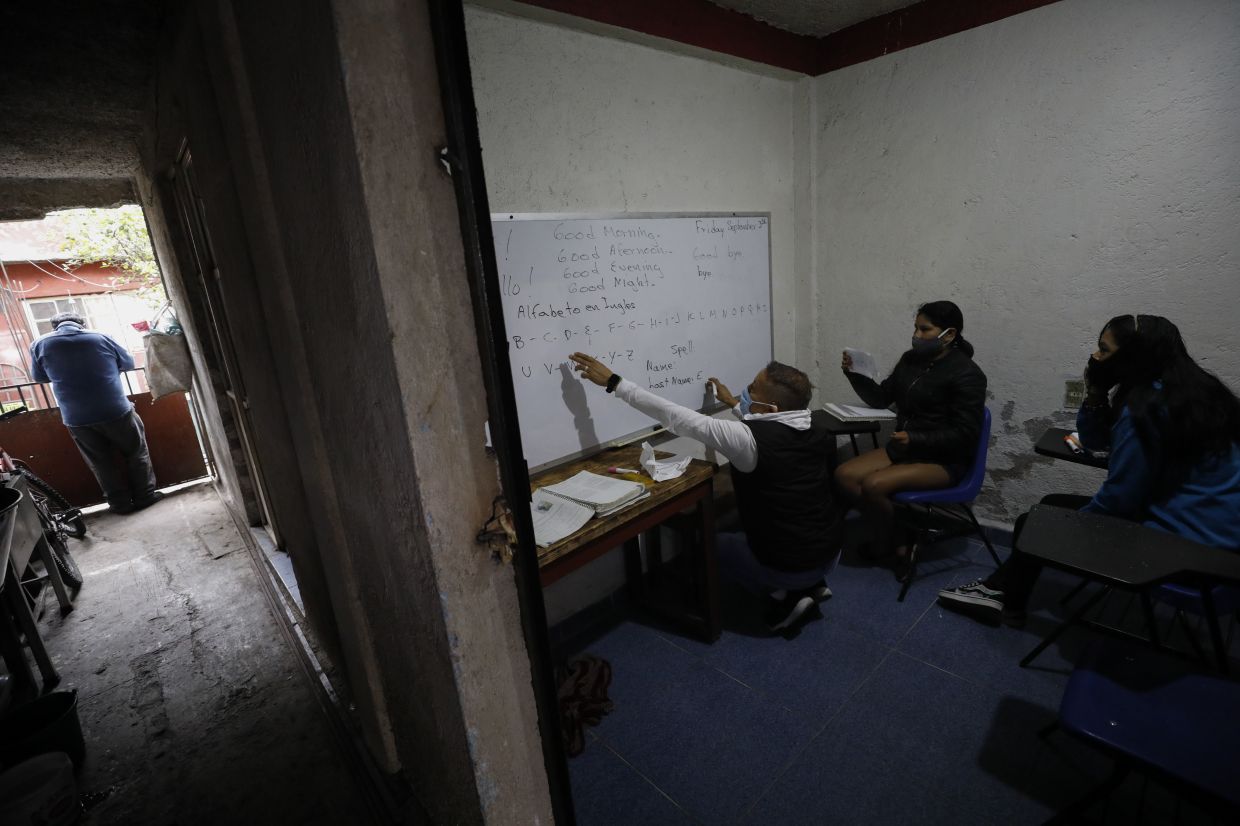 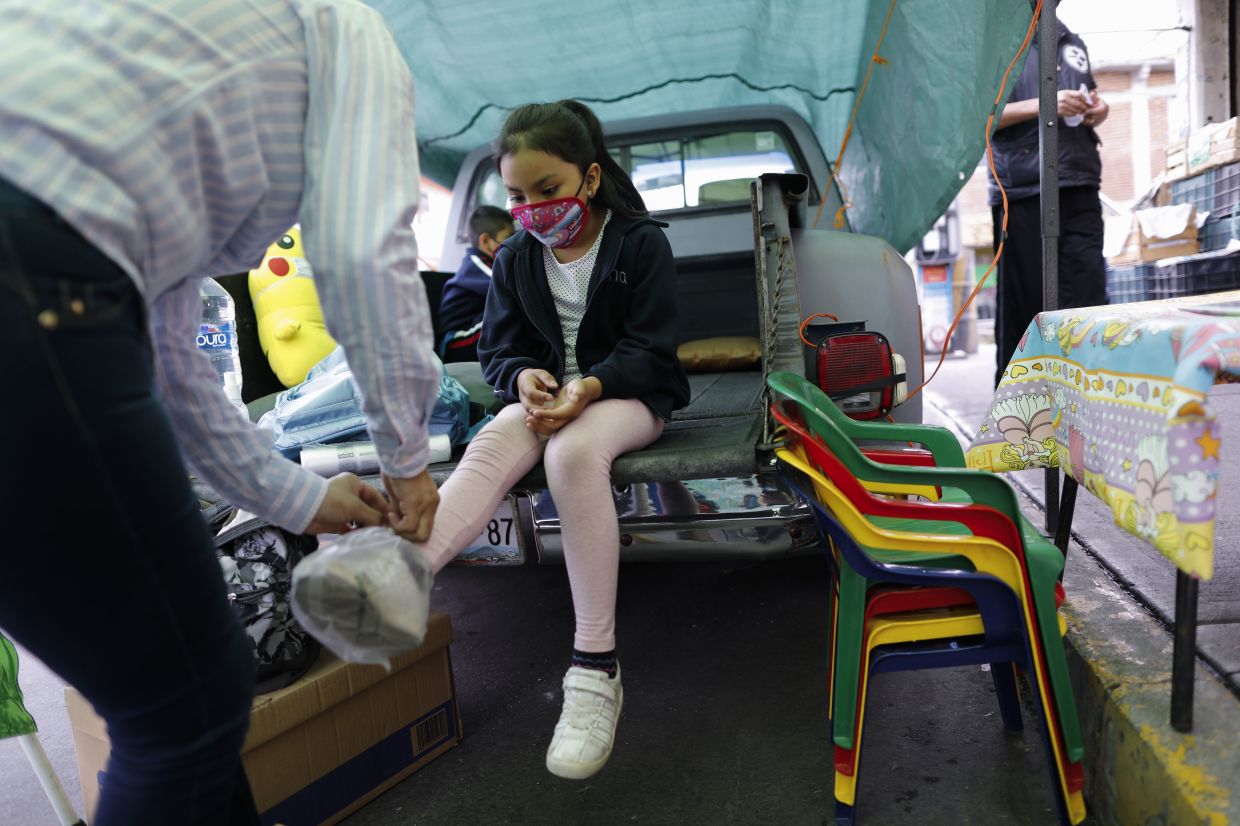 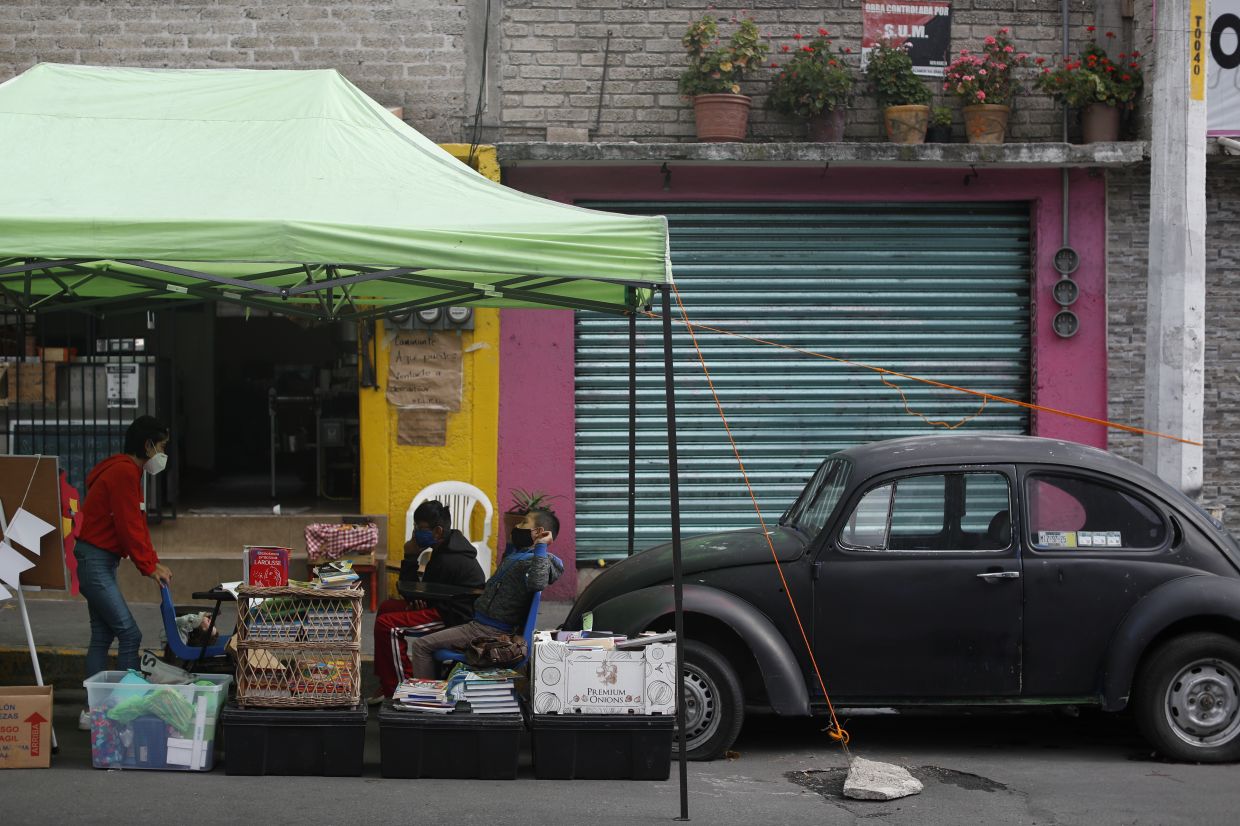 Davila assists student aide Joselin Hernandez Moreno while she learns on a donated tablet outside Davila's shop on the southern edge of Mexico City. Concerned about the educational difficulties facing school-age children during the coronavirus pandemic, Davila and her husband adapted several spaces outside their locale to provide instruction and digital access to locale children who don't have Internet or TV service at home, a project which has attracted donations and a waiting list of students. — AP

Siblings Paulina, left, and Axel, practice writing letters in a pick-up truck bed which has been repurposed as an educational space outside the 'Tortillerias La Abuela', or Grandma's Tortilla Shop, on the southern edge of Mexico City. — AP

Paulina Mariano Ortiz, 7, whispers to her brother Axel, 5, in a pick-up truck bed repurposed as an educational space on the southern edge of Mexico City. — AP

Brothers Bryan, right, and Emanuel Quintana, talk as they eat a donated breakfast prior to a history lesson in front of 'Tortillerias La Abuela', on the southern edge of Mexico City. — AP

Volunteer Fatima Rodriguez, left, uses puppets to illustrate a history lesson on Spanish colonisation and Mexican independence, celebrated in September, to siblings Bryan, right, and Emanuel Quintana, outside the 'Tortillerias La Abuela' on the southern edge of Mexico City. — AP

Lozano, right, is assisted by worker Martha Hernandez Carrillo, whose two young sons with special educational needs were the impetus for Lozano and his wife to start an educational project outside their storefront on the southern edge of Mexico City. — AP

Davila hunts for a history textbook as children prepare for a lesson outside her shop on the southern edge of Mexico City. — AP

Aide Joselin Hernandez Moreno, left, and her mother Maria Luisa Moreno Barajas follow along with a physical education break as Hernandez attends a televised class on a borrowed TV, in a small room loaned by a local plumber and ironworker, on the southern edge of Mexico City. — AP

Aide Joselin Hernandez Moreno, 13, follows along with a televised school program on a borrowed TV, in a small room loaned to an educational project by a local plumber and ironworker, on the southern edge of Mexico City. — AP

English and history teacher Eduardo Soto gives a free English class to siblings Mayra, right, and Marlen Estrada Ortiz, in a small room loaned to the educational project by a local plumber and ironworker, on the southern edge of Mexico City. — AP

Neighborhood volunteer Rebeca Rodriguez ties plastic bags over the shoes of Paulina Mariano Ortiz who arrives for a lesson in the bed of a pick-up truck repurposed as an educational space on the southern edge of Mexico City. — AP

Mexico's exports grow in September for 4th month, but at slower pace