Xiamen-based Cocos is the game engine that helped create nearly half of all mobile games in China in 2018. Unlike its competitors known for complex 3D games, Cocos founder Zhe Wang says he aims to offer the simplest and most budget-friendly game engine. — SCMP

If Epic Games’ Unreal Engine were a fancy restaurant – where customers could expect to pay high prices to enjoy leisurely meals – Chinese competitor Cocos Technologies would be the “McDonald’s or KFC of the market”, according to Xiamen-based Cocos’ founder Zhe Wang.

Both companies are known for their game engines, which are software frameworks to build and create video games, providing support for programmers to quickly put together code and render graphics.

Such platforms have become increasingly more popular and important as users spend more time on mobile devices. Mobile games made up 75% of total game sales in China in the first half of the year, according to a report by government-backed China Audio-Video and Digital Publishing Association.

Many of these are built at least partially with Cocos, which powered half of the top 10 games in China in May, according to data firm Qimai Data. Cocos said that in 2018, 45% of mobile games in China and 30% of those worldwide were created with the help of its game engine.

But as smartphones become increasingly more powerful, people are demanding more from their game engines, and competitors such as Unreal and Unity Technologies’ Unity are picking up momentum.

“In recent years, Unreal has proven that very hardcore 3D games can now be run on smartphones,” Wang said in an interview with the Post earlier this year. “However, this may also mean that top-shelf mobile games can become much more expensive to make.”

Chinese Internet giant Tencent Holdings, which runs the world‘s largest video games business by revenue, has opted to build some of its 3D games with complex graphics like PUBG Mobile on Unreal and others such as Honour Of Kings and Call Of Duty Mobile on Unity, although its much-anticipated Street Fighter: Duel uses Cocos.

After steadily making inroads in China since 2012, Unity has become the engine behind many critically acclaimed Chinese mobile games including Pascal’s Wager and Genshin Impact.

The company filed for an initial public offering earlier this month, and estimated in its filing to the US Securities and Exchange Commission that 53% of the top 1,000 mobile games on the Apple App Store and Google Play globally in 2019 were made with its tools.

Unreal Engine has also been making significant strides in China. Developed by Fortnite maker Epic Games, the Unreal Engine is set to power many games from recently-listed Archosaur Games, which is a primary game production partner of Tencent.

Unity and Unreal did not immediately respond to requests for comment on their expansion plans in China.

Faced with competition from such heavyweights, Wang said he aimed to offer the simplest and most budget-friendly game engine on the market rather than competing with Unreal or Unity head-to-head for top-shelf clients with big budgets.

As an open-source engine which is free to use, Cocos makes its money by providing technical support to users and forming partnerships with big enterprise-level clients, a business model common for open-source products.

“What we are trying to do is the opposite [from what our competitors are doing], which is to make creating games cheaper and easier,” he said. “If a game has a budget upwards of 50mil yuan (RM30.41mil), it may very likely go with Unreal. But if a developer wants to do a game with a budget of 20mil yuan (RM12.16mil), Cocos is more than capable of making a great game.”

Wang said that Cocos is also dedicated to serving individual creators who may only have a budget of less than US$1mil (RM4.17mil).

Cocos’ open-source platform can be a draw ﻿as developers can modify it, giving them more flexibility, according to Cornerpuz co-founder Stephen Chan. Cornerpuz is the development studio behind Oh~! My Office, a casual 2D office simulation game that uses Cocos’ most popular game engine variant, Cocos2d-x.

However, this also means maintenance is community-based and updates are less frequent and systematic than its non-open-source competitors, the Hong Kong-based programmer said.

Another major difference between Cocos and its competitors is that it is best suited for 2D and casual games, whereas both Unity and Unreal “do a very good job” with 3D games, Chan said. “For 2D game production, [Cocos] is better than Unity as the Cocos engine is 2D at its core, while Unity is 3D-based.”

Cocos said in a statement that it is, however, working on a new product called Cocos Creator 3.0, which will bring full 3D graphics to its game engine.

“The growth we have seen in mobile is expanding towards new genres, and we are working to fulfil the requirements for developers who are asking for better tools for the next generation of games, be it a hypercausual, casual, mid-core, or hardcore game,” the company said.

Beyond mobile games, Wang said Cocos is extending Cocos into an all-around app engine, powering other types of apps that need to gamify their content.

Most notably, Cocos has become the engine for a number of famous education services such as the New York-listed Liulishuo and New Oriental.

“These days everybody is taking classes online. So with this form of education, there is a demand for interactive slides,” Wang said. “To make up for the lack of interaction with remote education, now we have slides with which users can click and engage with.”

While Wang said Cocos will continue serving the low- and medium-priced segment of the market, the company may consider converting it into a paid product.

“We can’t just simply stick to open-source as a means to further public interest. Because in that case, no investors will fund us,” he said. “In the long term, I hope Cocos can become a company with both a successful business model and a good reputation in the community.” – South China Morning Post 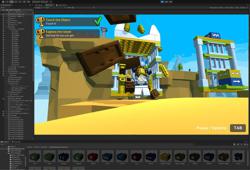 Build your own virtual Lego mini games with the Unity engine

Man United's Solskjaer pleased with progress ahead of milestone game