The startup plans to manufacture the VA-1X, capable of carrying up to five people including the pilot, in the UK. — Vertical Aerospace

Commuters travelling between London and Brighton could be making the trip via air taxi as soon as 2024.

Bristol-based Vertical Aerospace has just unveiled plans for a winged taxi that could make the 76 kilometer (47 mile) trip in as little as 30 minutes (the journey typically takes an hour by train). A model prototype will be completed by September 2021, the company said.

The startup plans to manufacture the VA-1X, capable of carrying up to five people including the pilot, in the UK. The emissions-free plane will reach cruise speeds of 150 miles per hour.

“We know ground-based congestion is already a problem and infrastructure can’t keep up,” said chief executive officer Michael Cervenka. “While none of us would say an aircraft carrying four or five people is the silver bullet to solve all of that, it clearly has a role to play.”

Cervenka, who formerly worked on a flying taxi concept for Rolls-Royce Holdings Plc, said such a model is now becoming viable, commercially, given today’s technology. The VA-1X will be powered by lithium-ion batteries, the company said.

Zero-carbon flight is a growing area of focus within aerospace as the industry reckons with pressure to lower emissions while also dealing with the biggest crisis in its history. The weight of the batteries poses a challenge in developing such aircraft, making smaller vehicles such as air taxis more achievable.

Vertical Aerospace’s work so far has been funded by founder Stephen Fitzpatrick, who also founded energy firm OVO. There also are plans at some point to implement up-front customer deposits.

Some of the fundraising and development was slowed down by the Covid-19 pandemic, but now, Cervenka said, the effort is being relaunched with a short-term target of £30mil (RM164.32mil). Ultimately, Vertical Aerospace is aiming to raise £150mil (RM821.57mil).

The company has a letter of intent from Honeywell International Inc to supply the flight deck technologies for the demonstrator. The air taxi will be certified through the European Aviation Safety Agency, hopefully by 2024, Cervenka said.

E-taxis have been pitched as a more environmentally friendly version of private jets. Initially, Vertical Aerospace said pricing will be somewhere between a private car and a helicopter. The company’s aim is to make the aircraft more affordable, with a goal of getting the cost down to a few pounds per passenger mile. – Bloomberg 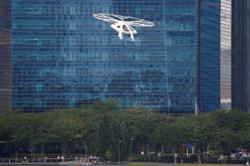