Hong Kong inmates to get tablets in prison trial opening up new world of e-books, movies and skills

Tony* remembers his black Motorola flip phone with an aerial sticking out at one end. In the 1990s, in India, it was the lightest, trendiest cellphone when others on the market were as big as a brick.

Then he landed behind bars in Hong Kong, sentenced to life imprisonment for murder. He was in his early 20s and had never used a computer, or sent an email.

Five months ago, the prison authorities gave him a tablet computer to use in his cell at night, allowing him access to almost 700 e-books, more than 20 songs, as well as games and rehabilitation videos.

“I knew about tablet computers from newspapers and TV, but never understood how they worked,” he said.

Initially, he was afraid of damaging the device and was unsure where to plug his earphones. “I have been in jail for more than two decades and feel a bit out of touch,” he said.

As part of a “smart prison” pilot project, Hong Kong's Correctional Services Department distributed 40 tablets to selected high-security inmates at Stanley Prison in January. All were serving long sentences of more than 12 years, and were chosen for their good behaviour. 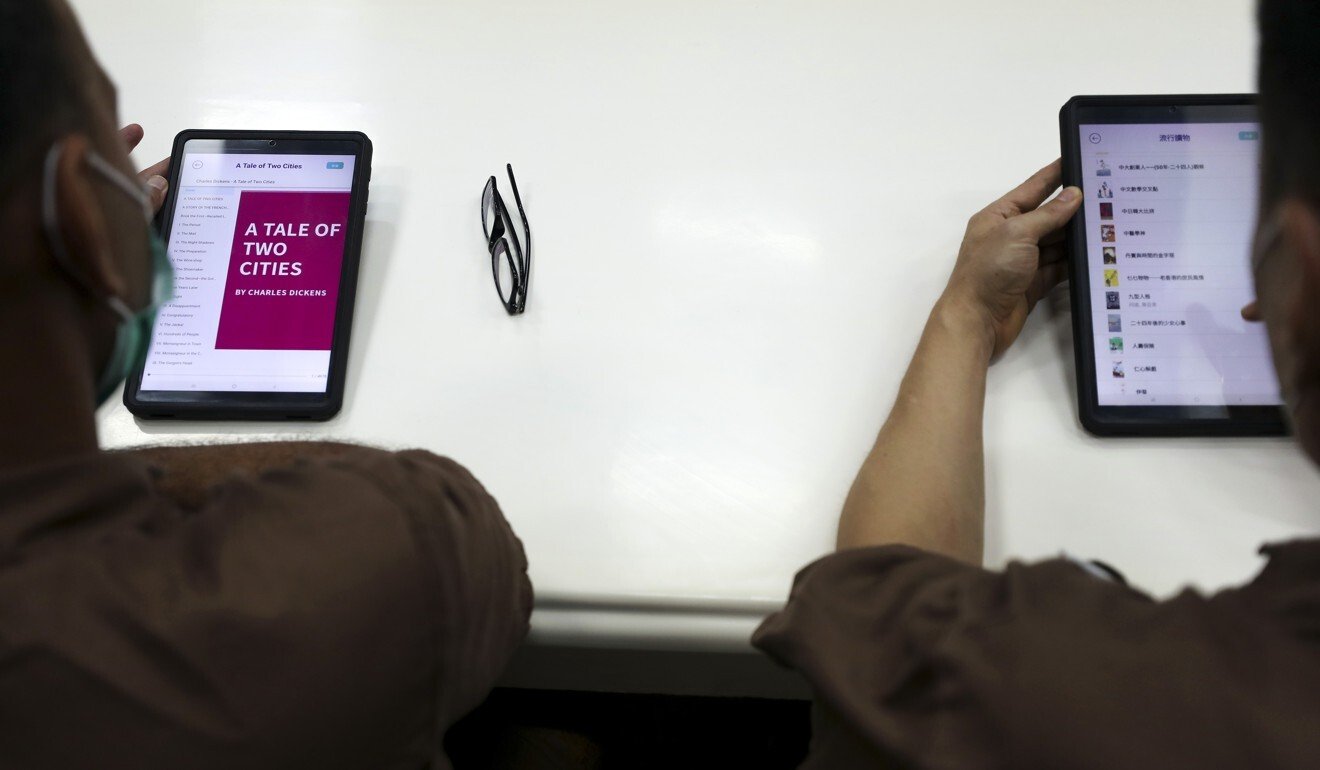 Assistant commissioner Wan Ming-ki, who is in charge of rehabilitation, hoped access to technology would help the prisoners gain skills and knowledge.

“They went to jail at a time when there were no smart devices, ” he said. “The tablets can help them prepare for life in a technology-saturated world. It could serve as encouragement.”

Currently, prisoners are only allowed to read books, newspapers and magazines, listen to the radio, watch television or write letters during their leisure time. Only those attending educational courses can use computers, without Internet connection.

The “smart prison” project was announced by Chief Executive Carrie Lam Cheng Yuet-ngor in her policy address in 2018. Since then, the prisons have been testing new devices in specific institutions, including a video analytic monitoring system and smart wristbands that track prisoners’ health.

Hong Kong’s correctional institutions had 7,737 inmates at the end of 2019, including 552 high-security prisoners.

For long-term prisoners, the tablet scheme is another way to spend their time well. Wan said the review board that re-examined the jail terms of long-term inmates could set a release date for those serving indeterminate sentences, if they showed good conduct.

He said the tablet scheme would be extended to more inmates in future, but not to all.

The device has already made a big difference in Tony’s life.

He had long wanted to read Charles Dickens’ 1859 classic novel A Tale of Two Cities, but it was not available in the prison library.

He said his heart jumped and he wanted to yell in excitement when he found the book on the device. He finally understood the array of temptations faced by the “head-down generation”.

“I used to write letters to my family or study during the four hours of leisure time at night, and time passed so slowly. Now the leisure period is gone in a blink,” he said.

He said his mother thought he was joking when he told her in a letter that he had got the new gadget.

“I hope one day I’ll be able to email my family in India and communicate with them promptly, as letters often get lost, ” Tony said.

His friend, Sam*, a Hongkonger also serving a life term for a murder committed in the 1990s, said the tablet allowed him to feel “freedom” as he read books and watched videos of his choice.

“I am more positive than I was earlier. I read with the music on whenever I am free. I want to absorb more knowledge and improve every day, ” said the 49-year-old who also enjoyed e-programmes about positive living.

“I feel calm, as if I have let go a lot of burdens. My family also encouraged me to read more and we have more topics to talk about.”

Currently, the tablet is not equipped with the function to send or receive emails. Asked if he knew how emails worked, Sam said: “I write one paragraph and the recipient replies with one as well? I hope I’ll be able to share my thoughts with my family whenever they come to mind.” 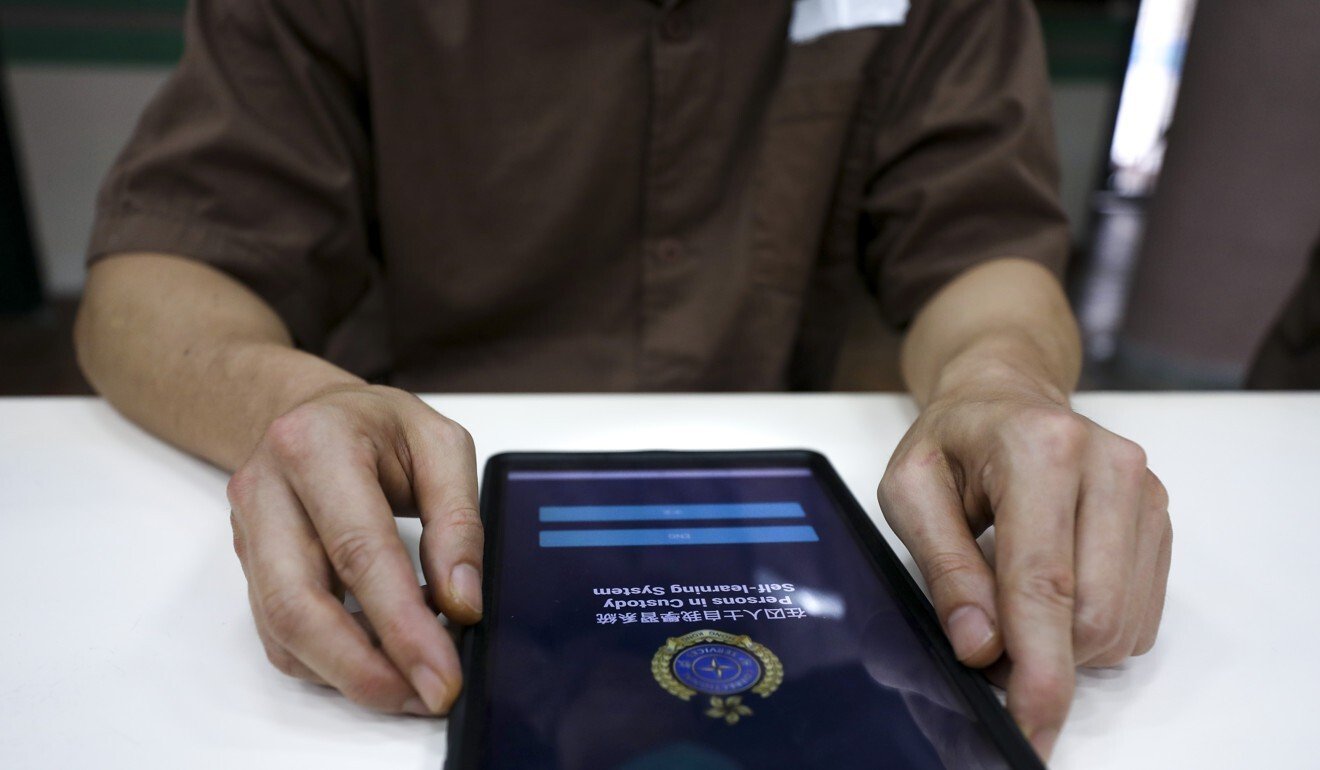 The department is expecting to upgrade the tablet in coming phases and allow inmates to email friends and family, with the contents screened, as required by law.

In future, the tablets could also be connected to WiFi, allowing inmates to browse designated Open University web pages and download study materials.

For Tony, using the tablet has made him think about the day he will re-enter a society where everyone has a smartphone and technology rules practically every aspect of life.

“I do worry about the pace of life beyond bars after I’m released,” he said.

Grateful for being part of the “smart prison” trial, he said: “The world and this society did not forget me. They still care, and I am touched.”

More prisons have begun using technology to rehabilitate inmates. In Belgium, some have installed a secure digital service which enables inmates to access television and films, e-learning materials and information about health care, jobs and legal matters.

A Singapore trial in 2017 gave inmates access to more than 600 e-books and allowed them to write letters on tablets connected to a secure internal network.

Prison rehabilitation efforts are geared to help inmates adjust to society and not return to jail after they are released.

In Hong Kong, the percentage returning to jail within two years of release dropped from 34.4% in 2007 to 24.8% in 2017. In comparison, almost 45% of ex-prisoners in the United States were arrested within one year of release, according to 2018 data.