WASHINGTON: Bill Frischling’s moment of inspiration came three years ago, when Margaret, his artificial intelligence bot, tried to transcribe a 127-word section of a speech by US President Donald Trump.

By the time Trump mentioned winning for the fourth time, Margaret crashed.

So Frischling rebooted. He hired a computer expert with a Ph.D. in machine punctuation to unteach Margaret normal grammar and syntax – and teach it to decipher Trump-speak instead.

Margaret – named for a character on the TV series The West Wing who can forge the president's signature – doesn't cheer, jeer or change the channel. It simply analyses every word Trump says, and how he says them, deploying algorithms to glean insight into the president's erratic nature from a database that stretches back more than four decades.

Among Margaret’s discoveries: Trump’s ability to fast-talk through an obvious falsehood is a sign that he is unbothered.

“Most people, when they’re not telling the truth, are not more comfortable. They’re less comfortable,” said Frischling, 48, a self-taught coder who is working from home in Great Falls, Virginia, during the pandemic. "He is more comfortable."

Margaret can assess when Trump is stressed, measure his calm and even mimic what Trump might say in public before he does, Frischling said. Margaret also has a pretty good sense of when Trump is really angry versus when he’s just putting on a show, he added.

To form those conclusions, Margaret keeps track of Trump’s pauses, hand gestures, rate of speech, the types of adjectives he uses, deviations from his usual vocabulary and the tone in his voice, among other factors.

Analysing a president's language for meaning and consequence obviously is not new. Abraham Lincoln spoke only 272 words in his Gettysburg Address, but they spawned a library shelf full of books.

Artificial intelligence, or AI, ups the means and the metric. Margaret has so far digested more than 11 million words of Trump's speeches, tweets, books, rallies, video, and radio and TV clips dating back to 1976, when Trump wrote his first published letter to The New York Times.

The database is a go-to resource for journalists, scholars and political operatives. Amazon taps Margaret for answers about Trump's schedule and Twitter habits on millions of voice-activated Alexa devices. Frischling also analyses other politicians' rhetoric as well as corporate earnings calls for private clients.

AI thus joins linguists, cognitive specialists, armchair psychologists, political scientists and others who scrutinise Trump's unorthodox speaking style, the core of his political brand. Weeks of nightly briefings in the coronavirus crisis offered an unadulterated dose, as he relentlessly claimed success and brushed off concerns about the government's flawed response.

Computer scientists say AI can detect patterns in troves of data too complex for the human mind.

”At first, I think people were totally perplexed” by Trump, said John Sipher, a former CIA agent for decades who was deployed in Russia and other countries. "I think now they have a better sense of how to play him."

But the technology is hardly foolproof, and the patterns found through machine learning "are often not what we think they are”, warned Aleksander Madry, a professor at MIT's Center for Deployable Machine Learning.

Some programmers have used bots to produce fake Trump speeches, raising red flags about the ability to create "deep fakes" that could disrupt American politics.

Bradley Hayes, who runs the artificial intelligence and robotics lab at the University of Colorado, says almost anyone with a large data set can use AI bots to draw meaningful conclusions – or to twist them.

As a graduate student at MIT in 2016, Hayes built a parody Twitter bot called @DeepDrumpf that imitated Trump's social media persona through word jumbles: "We have to make the United States. They can't do it. Because I'm going to pay for the country."

The Twitter account gained a measure of fame in its brief life, but Hayes had to block a tweet that included a threat to unleash violent terrorists against former President Barack Obama.

More time – and better data – would make a stronger bot for analysing Trump.

"If you had access to everybody who was talking to him on a given day, you'd probably be able to build a much more high-fidelity model of what he's going to be talking about and what his positions are going to be," said Hayes.

At some level, Margaret finds Trump predictable. He almost always speaks faster, about 220 words per minute, when he is off script, far faster than the national average of about 110 to 150 words per minute.

And unlike most people, who slow down and stammer or get uncomfortable when they are about to say something false, Trump speeds up, using filler phrases to get himself going – "First of all," "They're talking" – as he races toward cruising velocity, which Frischling calls his "salesman mode”.

"Think of it as steps in drive and overdrive," Frischling said. He does not like to label Trump's statements true or false, so he relies on independent fact-checkers to cross-check his data.

Trump slows to 111 words a minute when he is forced to read from a teleprompter, an act Trump once said should be illegal for people who run for president. He usually delivers such prepared remarks in a wooden monotone, ad-libbing asides for emphasis, as if seeing the material for the first time.

And when Trump is really angry? He tends to speak tersely and his oft-waving arms grow still.

"When he stops making gestures, that's the – watch out," Frischling said. "Whatever's about to happen, hang on to your tush."

To illustrate, Frischling runs a report from Margaret with fever lines depicting Trump's stress levels during his coronavirus briefing at the White House on April 23, the day Trump suggested doctors should consider injecting patients with household disinfectant to kill the virus.

The stress lines fluctuate, but the average remains steady until there's a sudden spike, just shy of 52 minutes into the briefing. That's when Washington Post reporter Philip Rucker asked Trump if he was irresponsibly hyping unproven science about the impact of heat and sun on the coronavirus.

"I'm the president, and you're fake news!" Trump shot back.

There is little ambiguity, according to Margaret. Trump was genuinely angry.

But often when making similar attacks on the “fake news”, Trump is hardly shaken at all.

To highlight that point, Frischling called up a video clip and report from Margaret from a news conference one day after the 2018 midterm election, which produced heavy losses for Republicans. Trump had a memorable confrontation with CNN reporter Jim Acosta, a favourite foil.

Trump flashed anger early in the exchange. “That’s enough,” he told Acosta as the reporter pressed him over immigration.

But when Trump dramatically walked off the podium and crossed his arms, his stress dropped to an even level, suggesting he was enjoying the clash. The sign of real anger would be rising stress levels.

Frischling would like to teach Margaret to analyse changes in Trump’s skin tone, but the quality of most of his video is not good enough.

Frischling has studied members of Congress for some of his private clients and believes they tend to forecast when they are about to make a policy shift, focusing more of their public comments on a given topic and altering their language.

Trump talks about so many topics, and changes his opinion so often, that there is hardly a relationship.

"He can say, ‘I think this is the worst’” about a policy proposal, Frischling said, “and then quite literally sign an executive order 10 hours later that approves it.” 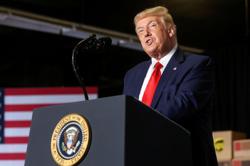 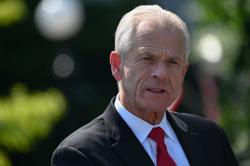 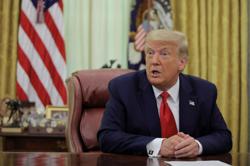