'If any of those competitors want to put their tech onto our platform, we’d be absolutely open as long as their tech is safe enough,' said Uber CEO Dara Khosrowshahi on March 4. He is pictured here in New Delhi, India, in October 2019. — Reuters

Uber Technologies Inc's self-driving unit is open to using technology from competitors in the industry, the company's chief executive said on March 4.

"If any of those competitors want to put their tech onto our platform, we’d be absolutely open as long as their tech is safe enough," Dara Khosrowshahi said at the Morgan Stanley 2020 Technology, Media & Telecom Conference in San Francisco.

The CEO said Uber was already talking to third parties, but did not provide further details.

Khosrowshahi added that Uber's Advanced Technologies Group, the autonomous driving unit, had "very significant structural advantages" due to the ride-hailing business including knowledge of routes that generate the most revenue.

Unlike other companies which are working on fully autonomous cars, Uber was focused on automating the simplest and most profitable routes in cities.

"We have a commercialisation strategy I don't see any competitor yet have," Khosrowshahi said.

Some investors have grown wary over the money Uber pours into its self-driving unit at a time when the industry acknowledges that autonomous car technology will take several more years to be road-ready.

Some companies have also raised concerns over the commercial viability of the technology. German carmaker Daimler AG in November questioned the future earnings potential of robotaxis and said it "right-sized" its spending level on the technology. – Reuters 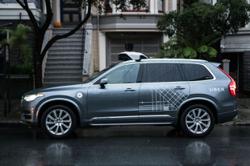 Do you know ... about Bluetooth technology?