Visits to medical-related mini-programs on Chinese super app WeChat rose 347% over the past 20 days, compared to data recorded in December. The impact of the countrywide lockdown on the economy has the potential to cut China’s gross domestic product growth in the first quarter from 6% to 4.5%. — SCMP

When Zhang Ge first donned protective clothing as part of his job as an engineer with a robotics company, it was not to prevent contamination of the delicate electronic circuitry inside his company’s hi-tech products. The 28-year-old had been sent to Wuhan, epicentre of the coronavirus outbreak, to install catering robots in a hospital at the front lines of the fight to contain the deadly disease.

Zhang was among more than 20 engineers from Shenzhen-based robotics company Pudu Technology assigned to install the robots in over 40 hospitals around the country. His task was to program the robots according to the layout of the hospital so they could automatically deliver cooked food and medication to patients’ bedsides.

“I was really anxious but my anxiety made my [protective] glasses fog up even more,” said Zhang, who went to college in Wuhan. “I had to remove them [to see my computer clearly].”

It took him four hours to complete an installation that would normally take one hour. By then it was after midnight and he could not get a hotel in the city so he ended up sleeping in the hospital’s duty room.

Hundreds of millions across China are facing similar feelings of anxiety, along with sadness and even anger, as the Lunar New Year holiday – normally a time for happiness and reunions with family – saw cities across the country go into lockdown to prevent the disease from spreading.

It has also seen many turn to new technology and the Internet for information on how to combat the virus and to carry out daily necessities, such as shopping and work.

During the Spring Festival holiday more than five million Wuhan residents – almost half of the city’s entire population – travelled to other parts of the country, making it nearly impossible to contain the fast-spreading virus.

The impact of the countrywide lockdown on the economy, with offices, factories and schools closed, has the potential to cut China’s gross domestic product growth in the first quarter from 6% to 4.5%, its weakest since records began in 1990, according to a Reuters poll.

Trade tensions with the US, including the blacklisting of telecoms champion Huawei Technologies by Washington, have seen China step up efforts to become more self-reliant when it comes to core technologies. Now the coronavirus outbreak has turned the country into a large testing ground to show the capabilities of its tech sector.

The goal is not only to combat the deadly virus through disease prevention, diagnosis and treatment, but also guarantee the continuation of normal daily life by enabling services such as online education and health care consultations amid the lockdown of multiple cities.

With an estimated incubation period of up to 14 days, the deadly coronavirus was able to rapidly spread during the holiday period. However, unlike the Sars outbreak in 2003, authorities now have at their disposal effective means to monitor and police citizens to try and limit the spread of the virus – thanks to new technology.

Last week, China’s State Council gave its backing to the launch of a coronavirus app that tells people whether they have been in proximity to anyone reported to be infected. The app draws on public transport records, including trains and flights, where booking a seat requires customers to input their national identification number.

In a similar vein, China is assigning citizens QR codes that will indicate whether they are at risk of contracting the coronavirus and need to self-quarantine. Millions of people in Hangzhou, the city where this system has already started as a pilot, have been using the system via the Alipay app, operated by Alibaba Group Holding affiliate Ant Financial Services.

Those with a “green” code can travel freely, while those with “red” must undergo a 14-day quarantine and those with a “yellow” code need seven days of quarantine. The national system was created “under the guidance” of the State Council and has been adopted in over 100 cities, according to an Alipay statement.

Artificial intelligence-powered facial recognition is widely used across China for applications ranging from spotting criminals on the run to authorising payments at cashier-less supermarkets. Now AI companies like Baidu and SenseTime are adapting their algorithms to identify “maskless” people in an effort to police people wearing masks in public places.

“In a subway station, there will be a notification in the system that there is a person without a mask. In offices, the name of the employee can be displayed if they [enter the building] not wearing a mask,” said a SenseTime spokeswoman.

“We have more data this time compared with Sars nearly 20 years ago,” said C K Lu, senior research director at Gartner. “This does not mean that machines can replace humans. But machine learning can provide advice for the government to devise the best strategy to contain the outbreak.”

Usually, it takes a doctor from five to 15 minutes to analyse a CAT scan of one suspected patient, which could include more than 300 images, to come up with a clinical diagnosis, whereas Alibaba said its new algorithm can complete the recognition process within 20 seconds, alleviating pressure on hospitals.

China’s tech companies have shown how swift application and reworking of existing solutions can be deployed to not only quickly analyse and diagnose a huge number of medical images, but also to provide medical support and advice to the whole country during the lockdown, said Bhvita Jani, senior analyst of healthcare technology at IHS Markit.

Alibaba Cloud’s AI-powered computing platform is collaborating with a team led by Zhong Nanshan, the well-known Chinese doctor who fought against Sars, to accelerate viral gene-sequencing, protein-screening and conduct other research in treating or preventing the virus.

“AI is going to have a big impact on developing a cure for the virus,” said Edgar Perez, author of The AI Breakthrough. “It's going to be very helpful to develop something that is going to be new for the coronavirus but still rely on the experience of researchers in the past who have worked on similar diseases such as Mers, or Sars.”

In fact, humans have been fighting the outbreak of deadly viruses for centuries, long before Sars killed nearly 800 people around the world. The most severe outbreak in the 20th century was the H1N1 pandemic in 1918, in which an estimated 500 million people – one-third of the world’s population at the time – became infected and at least 50 million died.

Without vaccines or even antibiotics available at that time, efforts to control the disease were limited to non-pharmaceutical interventions such as isolation and quarantine, according to the US Centres for Disease Control and Prevention (CDC).

“China’s public health system is still in the early stage of digitisation,” IDC’s Zhong said. “Hospital investments in IT services are small ... this epidemic can bring an improvement in hospitals’ digitisation and their acceptance of emerging technologies.”

The novel coronavirus, officially called Covid-19 by the World Health Organisation, is not only an opportunity to accelerate the digitisation of Chinese hospitals. It has also given a major boost to many new technologies and online services that people have started to use more as they remain largely confined at home.

Many who felt a deterioration in their health first turned to online medical consulting before they headed to a clinic or hospital to limit the risk of cross-infection.

Ping An Good Doctor, an online health care provider, said earlier this week that it recorded 1.11 billion visits to its platforms during the outbreak, with newly registered users growing 10 times.

Visits to medical-related mini-programs on Chinese super app WeChat rose 347% over the past 20 days, compared to data recorded in December, according to official WeChat figures released on Monday.

“In the future, this painful lesson will definitely make great changes in the communication and coordination of data in the public health system. This will also cause many new technology companies to adapt to such changes. There will be many different applications blooming,” said Gartner’s Lu.

Catering robot companies like Pudu Technology and Shanghai-based Keenon Robotics originally began deploying their technology in restaurants to fill a labour shortage gap for service staff, but have now expanded the service to hospitals amid the health crisis.

“[The use of robots] reduces the intensive work of frontline medical staff and cuts the risk of cross infections. It is a particularly hard time for them,” said Zhang Tao, the founder and chief executive of Pudu Technology, a four-year-old startup that has deployed its robots outside China in Singapore, South Korea and Germany.

Separately, many activities are moving online, providing new opportunities for online education providers and fresh food delivery platforms. The average daily Internet usage of Chinese people rose to 7.3 hours a day in the week after the Lunar New Year holiday, or 30 minutes more per day than during the holidays, according to a Questmobile report on Tuesday. 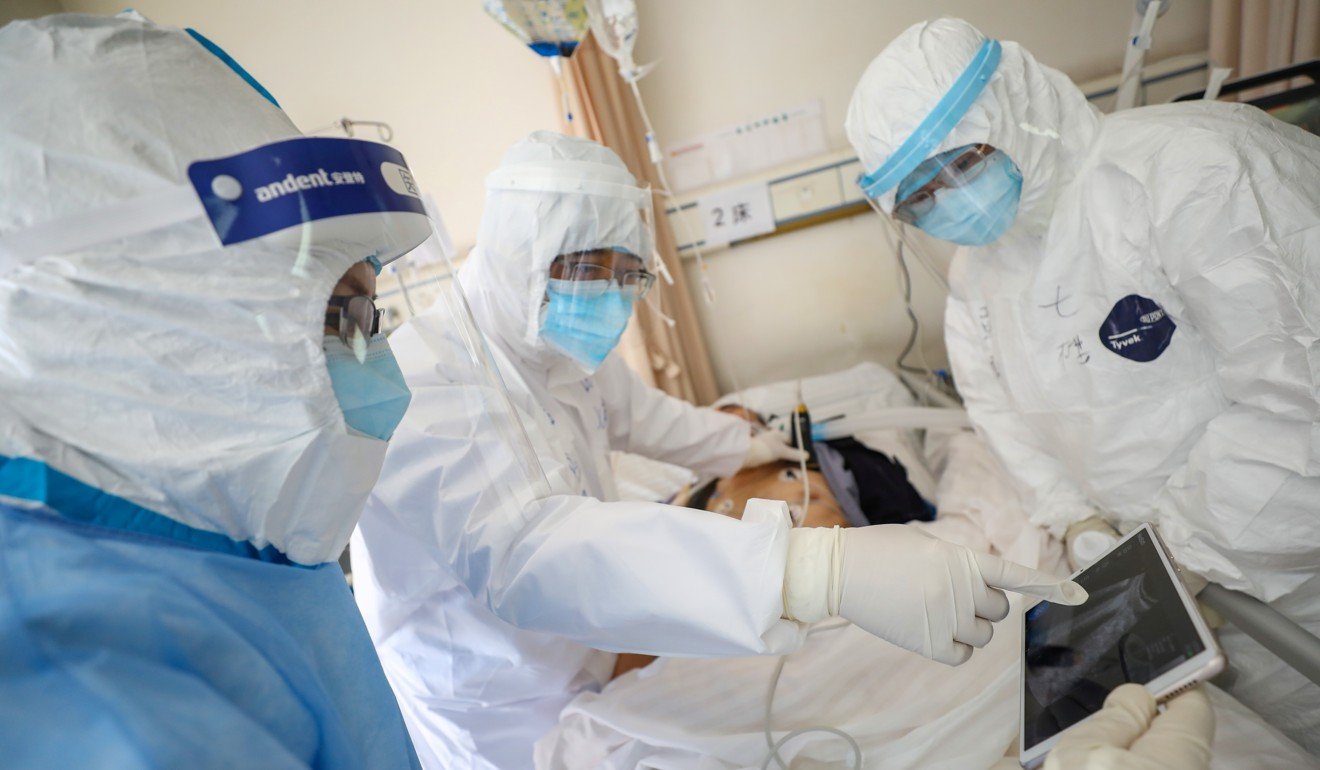 The number of people watching online videos and using Internet-based education apps has increased 24.3 million and 23.8 million per day respectively, while apps designed to improve working efficiency have gained nearly 40 million more daily active users since the onset of the outbreak during the Lunar New Year holiday, according to Questmobile.

The growth in online apps is being driven by millions of people trying to continue life as usual even while confined to home. Food delivery giant Meituan Dianping said the daily sales volume of fresh food ordered by customers in Beijing is now two to three times higher than before the Spring Festival holiday.

Like many young Chinese, Shanghai resident Wang Ying, 25, used to order cooked food online but rarely used apps for online deliveries of fresh food until the outbreak made her feel unsafe about going to the local market.

However, when using Dingdong Maicai, an online fresh food platform, she often found that green, leafy vegetables had sold out by the time she woke up at 9am or 10am. Now Wang sets an alarm so she can order earlier. “But I still need to choose quickly or they will be sold out,” she added.

Robotic deliveries of fresh food door-to-door may be a reality one day, but meantime the catering robots that engineer Zhang Ge and his colleagues installed in hospitals are doing their small part to combat China’s biggest health crisis in modern times.

Zhang has no regrets about going to the epicentre of the outbreak even though his mother was against the idea at the beginning and worried about his safety. “When I look back, I will feel good about myself for standing up and doing something meaningful to help,” he said. – South China Morning Post