Get In Gear: Droning ain’t boring

The PowerEgg X autonomous personal AI camera is configured as a waterproof drone with pontoons at the 2020 CES in Las Vegas, Nevada. — AFP

Drones have come a long way from being merely cameras with wings, as various companies are now flying to niche directions to stand out (and above) the crowd.

Each of these drones appears to have one job to do, which it does very well, whether it is flying over or underwater, flying for longer periods, or even tracking dancing users.

The most normal of the lot, Autel Drones calls itself “the most capable folding drone on the planet”. Autel Drones claims the Evo II is the first drone on the market equipped with an 8K resolution camera. — Autel Drones

It claims to be the first drone on the market equipped with an 8K resolution camera, though upgraded versions pack a higher quality camera with a larger sensor that records in 6K instead. A commercial version even boasts an infrared camera, which “sees” objects based on its temperature, much like the sci-fi monster Predator from the eponymous movie (not the Predator drone).

It’s a fairly lightweight device, weighing around 1kg, and can fly for 35-40 minutes on a single charge and travel up to 9km away from its controller.

Compared to the Evo II, Doosan Mobility’s DS30 octocopter drone is 20 times heavier and can fly for three times longer, thanks to its hydrogen fuel cells. The South Korean company claims the DS30 drone can fly for up to 120 minutes, but only without any additional loads. — Doosan Mobility

The large quadcopter weighs between 20-21kg depending on whether its user opts for a 7-litre or a 10.8-litre hydrogen tank, and it can also carry loads of up to 5kg.

The South Korean company claims the drone can fly for up to 120 minutes, but only without any additional loads.

The DS30’s long flight duration netted Doosan Mobility two awards at CES 2020 for Best of Innovation Award in the Drones and Unmanned Systems Category plus an Honoree Award in the Sustainability, Eco-Design and Smart Energy Category.

The drone is meant for professional use, such as in building inspections, and its price is available upon request.

This security drone stays close to home, being designed to patrol a user’s house autonomously. 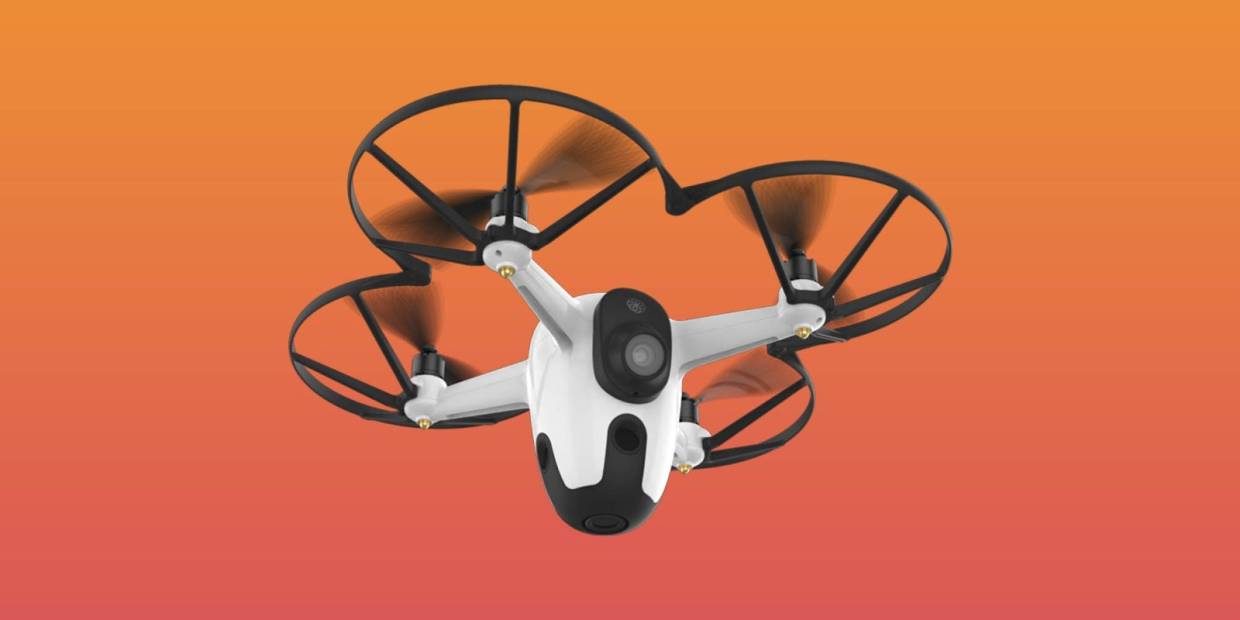 The Bee is designed to patrol a user’s house autonomously. — Sunflower Labs

The 1kg Bee is part of a suite of smart home security technology which includes Sunflowers – which are porch lights that act as motion- and vibration-detecting sensors – and The Hive, which is a weatherproof outdoor charging station for the Bee that also houses its AI computer. The theme fits with its maker’s name, Sunflower Labs.

The company claims its AI is smart enough to tell the difference between objects like a car parked in the user’s driveway and people walking by. If it detects something that deviates from the homeowner’s usual routine, it will deploy the Bee, which can also send live video to the user’s phone.

For outdoorsy fun, the SplashDrone 3+ is as tough and waterproof as they get.

SwellPro claims the waterproof drone can be flown in rain and snow or even propelled underwater, albeit for a short duration, at a maximum depth of two feet. The Swellpro SplashDrone 3+ waterproof drone is displayed in water at the 2020 Consumer Electronics Show (CES) in Las Vegas, Nevada. — AFP

Designed for life at sea, it can land on water, is resistant to salt water corrosion and able to go fishing by carrying up to 1kg of bait 1km away from its owner, then dropping bait where needed after spotting fish with its waterproof camera.

In case it gets tossed around while on the water’s surface, the drone is also able to flip itself right-side-up upon command.

Where there’s rain there’s often wind, and SwellPro claims its 2kg drone can fly steady in blustery conditions of up to 49km/h.

Unlike the previous dedicated-purpose drones, PowerVision is positioning the PowerEgg X as a modular device that can transform from a compact drone into a handheld gimbal-stabilised camera. In this mode, its battery life jumps up to 3.5 hours. The PowerEgg X autonomous personal AI camera converts into a drone and flies through falling water at the 2020 CES in Las Vegas, Nevada. — AFP

As a drone, the PowerEgg X is waterproof, can take off on water, fly for 30 minutes on one charge, push against gusts of up to 38km/h, and packs a camera that can capture 12-megapixel photos and 4K 60fps video.

The camera also has AI capabilities for facial detection, which helps it track subjects even while dancing and recognise gestures that trigger remote actions. It is also able to synchronise sound picked up by the user’s phone with its pictures, creating media with audio. The PowerEgg X drone can transform from a compact drone into a handheld gimbal-stabilised camera. — PowerVision