An Alpha Mini robot that use artificial intelligence dancing at the Las Vegas Convention Center during CES 2019 in Las Vegas. With improvements in AI, digital voice assistants are becoming smarter and more like humans, opening up new possibilities, said analysts. — Photos: AFP

SAN FRANCISCO: The screens will be bigger and bolder, the cars will be smarter and some of the technology will be up-close and personal – even intimate.

The 2020 Consumer Electronics Show opening in Las Vegas will be crammed with the latest in connected devices, from light bulbs to underwear, along with the newest technology for automobiles, health and wellness, smart homes, retailing and more.

One of the world's biggest trade shows, the gathering features 4,500 exhibitors, an estimated 175,000 attendees, and 1,000 speakers in exhibit areas equivalent to more than 50 football fields. The CES runs from Jan 7 to 10.

Small startups and large tech firms from dozens of countries will be angling for a slice of the trillion-dollar-plus global consumer electronics marketplace.

The show, organised by the Consumer Technology Association, will see a large presence from tech giants such as Google and Amazon, vying for leadership in providing the "brains" or digital assistants for many smart products. 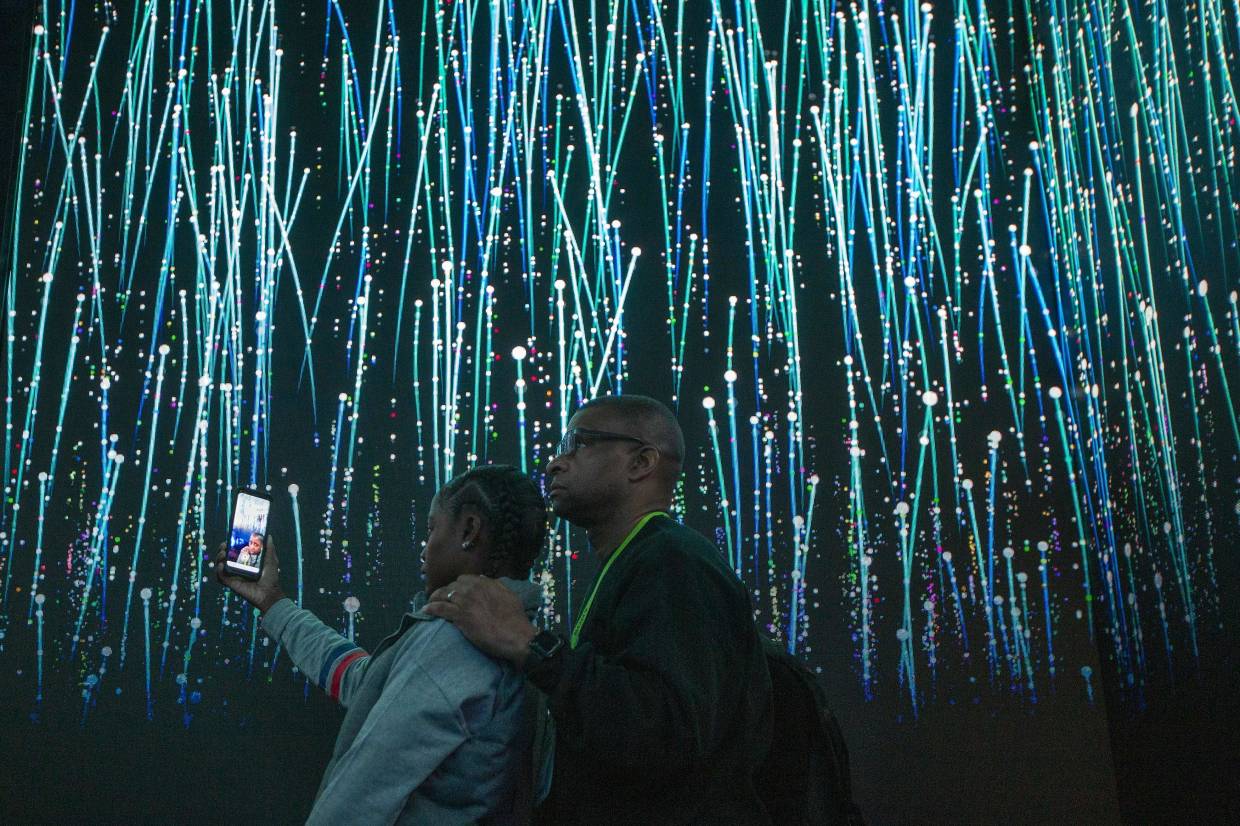 A file photo of people watching an immersive video introduction to Qualcomm 5G technology during CES 2019 in Las Vegas.

"We can see devices that can now sound happy if your favourite football team has won and... dejected if your mother is at the door," Forrest said.

While the long-sought goal of "emotional intelligence" in computing is still far from reality, he said, advances are allowing more computing power to be packed into smaller spaces including smart eyeglasses, in-ear "hearables" and other devices.

"We can imagine the voice assistant in the ear which can do a lot more than it does today," Forrest said. "Maybe the restaurant across the street can read you their menu, or you can get turn-by-turn directions in your car."

Manufacturers including South Korea's LG are expected to unveil new televisions with the latest ultra-high definition standard known as 8K, even if little or no content is now available in the format.

Innovation around the small screen may lead to more folding smartphones and other adaptations.

"Imagine an iPad device you can fold and carry around with you – I think we will see a lot more of those," Moorhead said.

Fully self-driving vehicles may not be ready to go mainstream, but that is not stopping innovation.

"There's a deepening understanding that the companies have a big hill to climb" before deploying fully autonomous cars, said Gartner analyst Michael Ramsey.

Accenture analyst Juergen Reers said CES is increasingly important for the transport sector because "most of the innovation is happening in software and services" rather than in vehicles themselves.

Reers said the industry is changing because "consumers are looking at mobility as a service, rather than simply buying a vehicle".

China-based Futurus Technology says it will launch what it claims is the first "mixed reality interactive windshield" to give motorists real-time information about a vehicle's status, performance and surroundings.

Others will use 5G technology and artificial intelligence to help cars detect pedestrians, bicycles and other vehicles.

Amazon is revving up its auto efforts with a booth showcasing its cloud-computing AWS division aimed at "intelligent, personalized products and services."

And a new Fisker Ocean electric car is set to be unveiled, in one of the latest challenges to segment leader Tesla.

In the smart-home space, more devices will connect to digital assistants like Amazon Alexa and Google Assistant, or their rivals.

These will include smart screen command centers, smart mirrors, and kitchen gadgets and appliances.

Avi Greengart of the consultancy Techsponential expects more smart home devices like security-focused video doorbells, but says the integrated smart home is not yet here.

"It isn't exactly clear people want to live in the Jetsons' home," he said, referring to the cartoon series about a futuristic family.

Wearables are reaching more of the human body in the quest for improved health and connectivity.

German-based Bosch will be showcasing smart glasses designed to help motorists with heads-up navigation assistance, with other smart eyewear to be revealed. 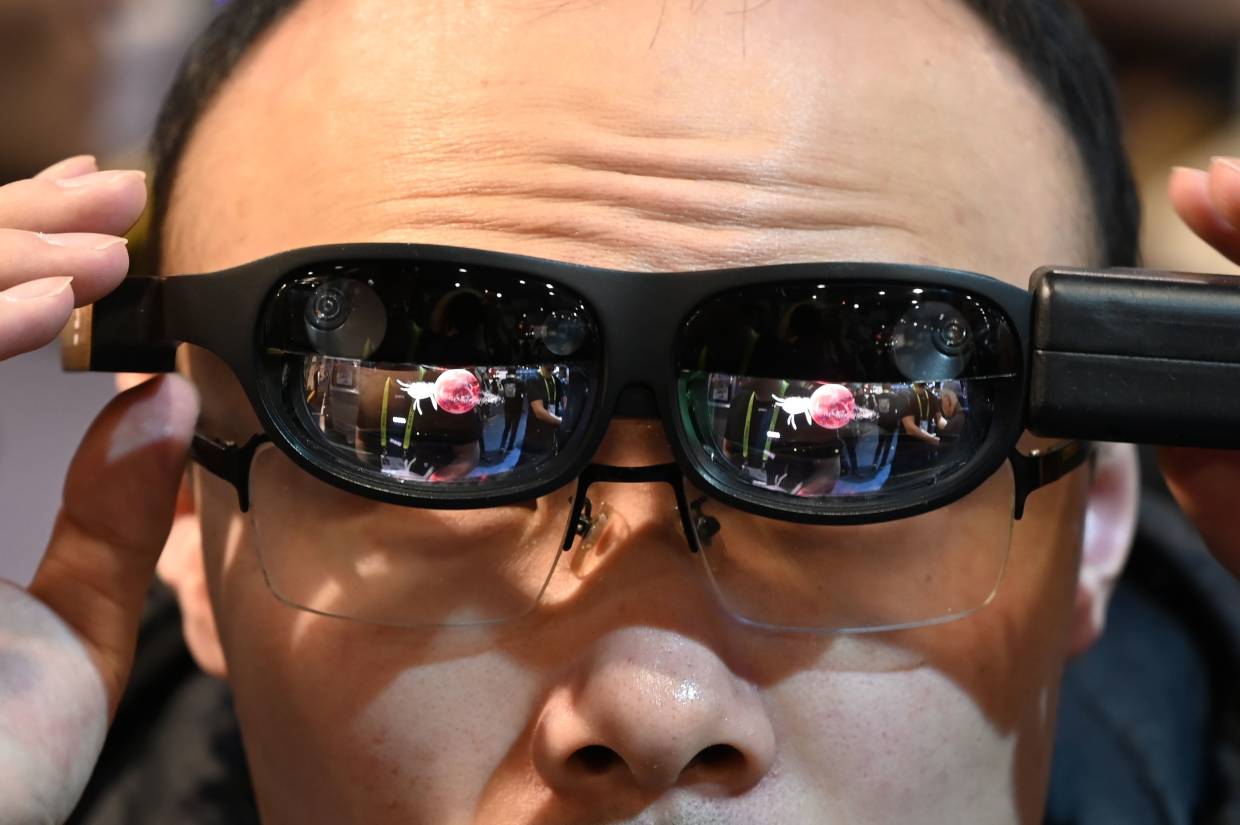 A file photo of an attendee trying on NReal augmented reality (AR) glasses, on the last day of CES 2019 at the Las Vegas Convention Center in Las Vegas, Nevada.

Ear-worn devices are among the fastest-growing wearables, capturing 47% of the segment in the second quarter of 2019, according to market intelligence firm IDC.

The textile computing firm Myant will be showing smart clothing – starting with connected underwear – with sensors that monitor a wearer's heart and breathing rates, temperature, movement, posture and sleep.

"It is time for technology to morph around people as opposed to the other way around," Myant founder Tony Chahine said.

Other CES exhibitors will be showing robots for health and security, artificial intelligence for food, airborne devices including a "flying gondola", and technology aimed at improving the retail experience.

Sex tech will be officially part of the show, a year after a flap over the disqualification of one innovation award winner.

A sexual wellness marketplace promises products that show organisers said "must be innovative and include new or emerging tech to qualify". – AFP