When the older generation become dependent on their smartphones

Smartphones and devices don't just entice the young – the elderly are just as liable to become overly attached to these modern-day devices.

“I don’t have a smartphone addiction. My wife does,” claims Lioh Cheng Lim, 61, glancing at his partner of over three decades.

“No, don’t believe him. He is more addicted to the smartphone than I am!” retorts Yea Bee Hong, 62.

Retired radiographer Lioh relents and admits that he does use his smartphone a lot, and that in fact, it is the first thing he reaches for right after he wakes up.

“I get up and check all the unread messages on WhatsApp. I have about 20 active WhatsApp groups and it takes about 15 to 20 minutes just to read them. Then I browse through my emails, and other correspondence,” adds Lioh who has Facebook, Instagram, WeChat, Line, Zoom and Viber accounts. Lioh reaches for his smartphone the moment he wakes up every morning. — SAM THAM/The StarAs the current Rotary District 3300 Governor, Lioh says that he is predominantly occupied on the smartphone, posting activities, liasing with fellow local and international members and sharing educational messages across the Club’s social media accounts.

Yea is a retired teacher who spends most of her time on Facebook, keeping in touch with her former students and colleagues. She has over 900 friends on Facebook, and according to alerts from the social media platform, Yea spends at least six hours a day looking at the screen.

“I think she’ll die without her handphone. She even takes it when she goes to the toilet. Actually, recently she was locked in the toilet. Thank goodness she had her handphone so she could call for help,” shares her husband.

Yea claims that she is only on her phone when she isn’t occupied with other activities. “Usually I teach tuition classes and am too busy then to look at my phone. Only when I have nothing to do am I always on the phone.”

Smartphones and the elderly

Lioh and Yea are just two of the many senior citizens who have become dependent on, and possibly even addicted to, smartphones.

According to Useful, Social And Enjoyable: Mobile Phone Adoption By Older People, smartphone usage among the elderly is dictated by several factors namely social influence, usefulness and relatedness. The 2009 paper states that after overcoming the initial resistance to learn new technology, the elderly begin to enjoy the experience of using it.

This is motivated by “heightened self-esteem” especially when they could perform certain chores by themselves, for example paying bills or buying items online. It also helps that the smartphone allows them to get information and communicate with others. Lioh (left) and Yea sometimes communicate via WhatsApp even when they are both at home at the same time. — SAM THAM/The Star

But when is it too much? Is it when Lioh and Yea use WhatsApp to communicate even when they are at home at the same time?

Silicon Valley based consultant and writer Alex Soojung-Kim Pang says that the elderly are susceptible to smartphone addiction like the younger generation. “We’re all human,” says the author of The Distraction Addiction.

Pang believes that the smartphone is a tool for distraction, and that the elderly are simply distracted. Pang suggests a digital detox not just for senior citizens but for anyone finding themselves overly attached to their gadgets. — Alex Soojung-Kim Pang

“Technologies are designed to be distracting and companies spend enormous amounts of money researching ways to get us hooked,” Pang says in an email interview.

The distraction is oftentimes harmless, but must be taken seriously if it alters the elderly’s lives negatively, says clinical psychologist Yap Chee Khong.

“In order for the behaviour to be considered an addiction, one should look at how often they are on the phone and whether it affects their daily functions,” says Yap, adding that smartphone addiction among the elderly is yet to be included in the universal mental health guideline, the Diagnostic And Statistical Manual Of Mental Disorders.

But like all forms of addiction, smartphone addiction among the older generation can be determined by looking at several factors. Yap says that we need to understand the thinking behind one’s attachment to their smartphone. — SIA HONG KIAU/The Star

“Do you believe that when this person uses a smartphone, it affects the person’s family life, social life and work? Do you notice that the person must have a handphone to survive, or they can’t function well? Even though we don’t have a formal diagnosis here, it is consistent with the definition of addiction,” says Yap.

He adds that this then leads to the question of “why” the elderly are addicted to their smartphones and other gadgets. “Is it biological, psychological or social?” he asks.

According to Yap, when humans do something they love, their brains would secrete hormones like endorphins that would reinforce the behaviour.

“Everytime we do something and we release that kind of hormone, it forms a cycle telling us ‘I like this, let’s do this again’,” he says.

Some people may even use the smartphone to help them fall asleep – so it’s not just about excitement or to be entertained, Yap adds.

“It could be a way for them to make themselves feel tired.” Retired veterinarian Dr Abdul Alim Sidique, 75, says that he relies on his smartphone to lull him to sleep. The nightly ritual includes listening to “sweet” music and symphonies.

In the day time, Abdul Alim spends almost three hours just listening to various news portals, Islamic lectures and speeches on YouTube – a daily habit he formed after getting his first smartphone three years ago.

“I prefer the old feature phone. All I needed to do was press and make a call. The smartphone is too smart for me,” he shares.

Yap says that we need to understand the thinking behind one’s attachment to their smartphone.

“Do they think that the smartphone or gadget will help them pass time? Is it to get information? Is it to keep themselves entertained?” he asks. Mark cannot remember the last time he was without his smartphone. — SAM ONG/The Star

For financial consultant Mark Selvarajah, 67, it is all of the above.

“I think I spend a lot of time on the phone. At traffic lights, while waiting for the light to go green, at church, in the toilet. The only time I am off it is probably when I am playing golf, but even then, during breaks, I still look at my phone to check what is happening out there,” Mark reveals.

He cannot remember the last time he was without his smartphone. “One time, I had already been on the road, about 15 minutes away from my house, before I realised that I had left my phone back home. I made a U-turn to go get my smartphone,” he shares.

Mark says that his habit annoys his wife, especially when he looks at his phone during sermons in church – “It can get pretty long” is his reason – or at the dinner table.

“My wife is always telling me to put down the phone. But sometimes, when she is with her friends or family and they’re talking about things that don’t interest me, I pick my phone up,” Mark admits.

Yap however has a different take on such behaviour.

“Why would he enjoy the tablet or smartphone, and the isolation it brings? It could be a sense of loneliness. They could be surrounded by many people but internally they feel lonely. For some people, they have nothing else to do, and use it as a distraction, and to have a sense of meaning,” says the psychologist.

Some people may also use the smartphone as a way to avoid doing some things, says Yap.

“They could think ‘I don’t want to talk to certain people, so I’ll use my smartphone to seem busy’. This depends on the underlying issue behind the behaviour. So it may not simply be addiction, it is something that helps them function, helps them cope with some issues,” adds Yap.

A person could also be glued to their phone due to their surroundings. According to Yap, one should ask how they got the smartphone in the first place.

“It could be the environment. Maybe a family member bought it for them. It could be peer influence, for example, if everyone at the table is on the phone, then perhaps they would think that it was best to also use the smartphone to seem ‘normal’,” says Yap. 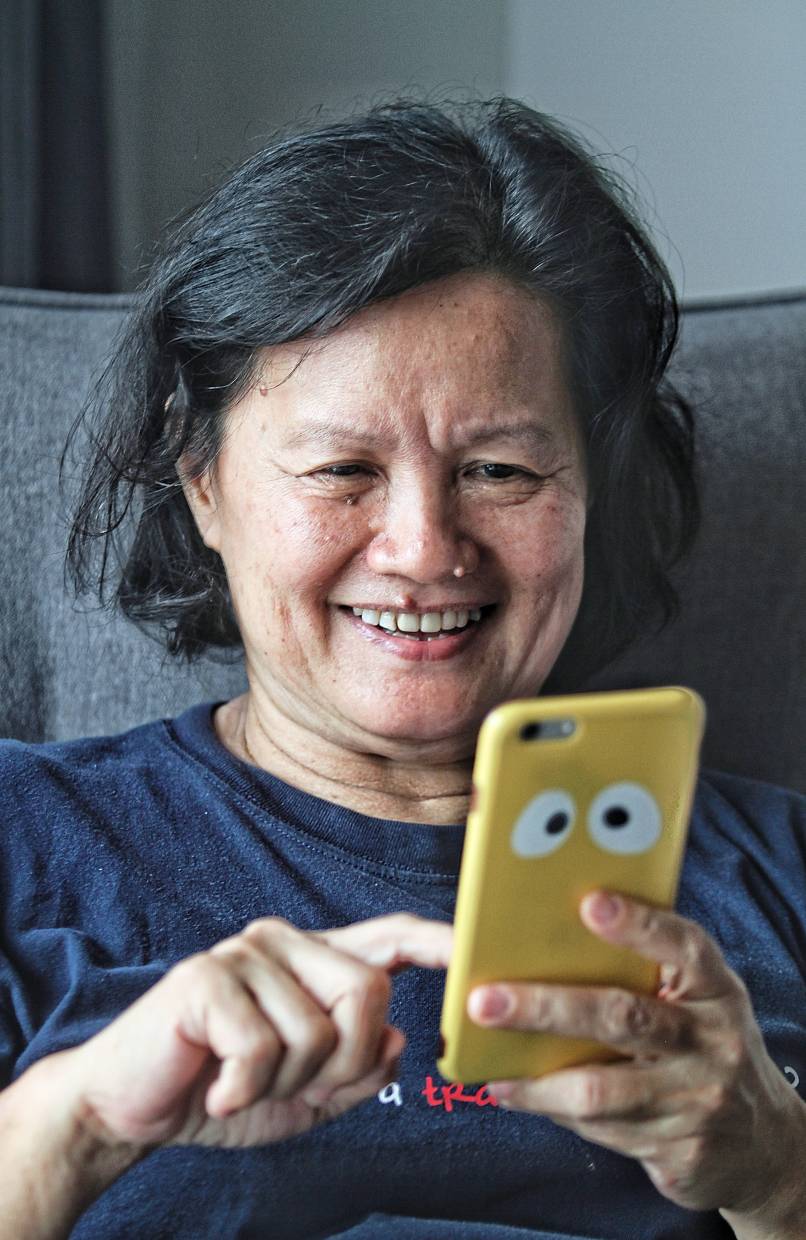 Yea has over 900 friends on her Facebook account and spends about six hours every day looking at their postings. — SAM THAM/The Star

Yea says that her children are the reason behind why they’re always on the smartphone now.

“The only way to communicate with them and get a fast response was via WhatsApp, so we had to get it to keep in touch with them,” says Yea.

However, gone are the days when Yea and Lioh had to reprimand the kids for staying glued to the screen.

“Now they tell us that we’re spending too much time on the phone. They ask us to put down the phone during meal times, but they’re the reason why we first picked them up!” she adds.

Pang believes that the elderly – or anyone for that matter – can get out of the toxic dependence with their smartphones and gadgets by redesigning their relationships with technologies. This is so the devices help them be more focused and mindful, rather than perpetually distracted.

“This means doing things like setting their phones to only alert you to messages from close friends, being aggressive about shutting off unnecessary notifications, carving out time in your day when you don’t check your email or social media, and setting aside times when you disconnect from all distracting technologies,” says Pang.

He suggests a digital detox not just for senior citizens but for anyone finding themselves overly attached to their smartphones and gadgets.

The digital detox “encourages you to think about what technologies are distracting you; helps you develop habits to overcome those distractions; and rebuilds your ability to live offline”, he says.

Yap has a simpler explanation.

“Nobody will admit that they are addicted to their smartphones. So, if you want them to spend less time on smartphone, find something meaningful for them to do. This activity should be meaningful to them, not you, because then there is a higher chance of them actually doing it,” he says. 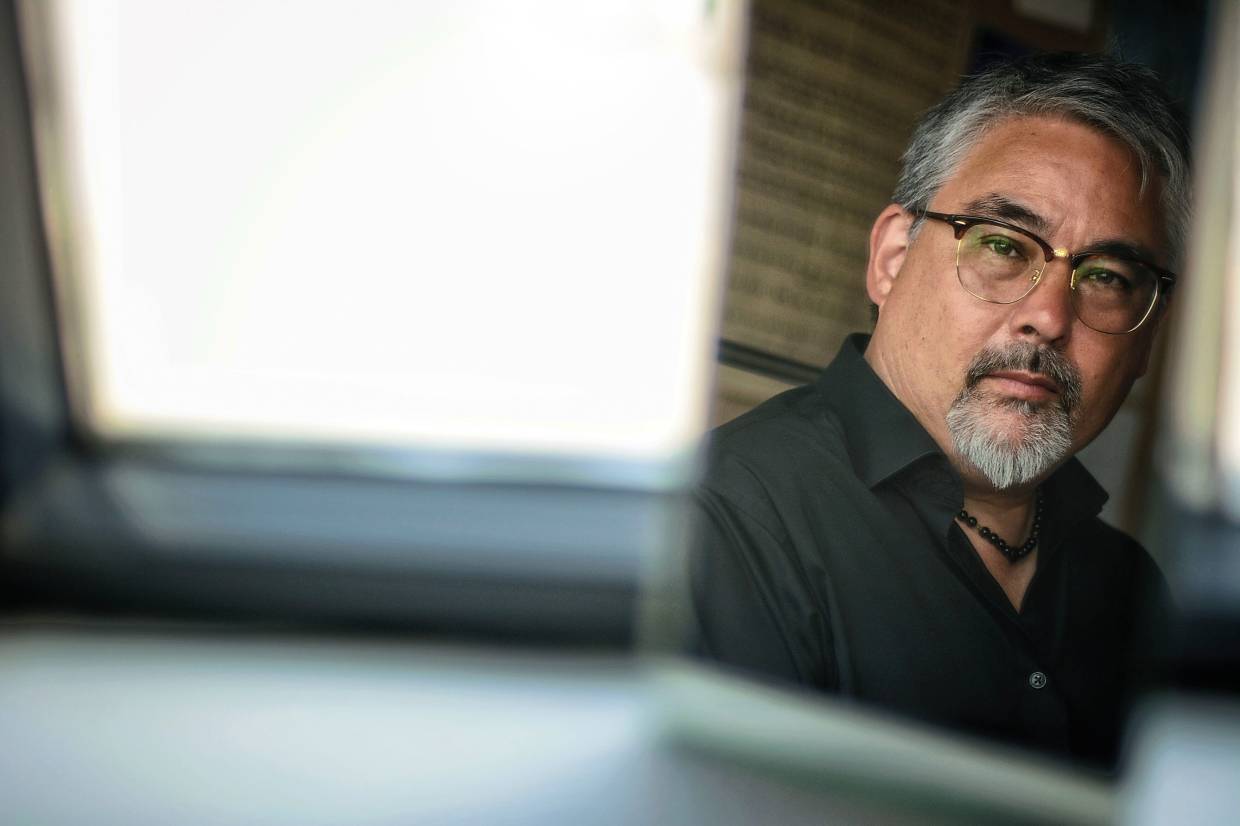 Pang believes that elders – or anyone, for that matter – can reduce the toxic dependence on smartphones and gadgets by redesigning their relationships with technologies. — LEILA SULTANZADEH

This advice works for Mark – as someone who spends about five hours a day on the device, he believes that he could go at least a day without his smartphone. But there’s a catch: “That’s provided that I am occupied with activities like hiking or other exciting group adventure.

“I am still active, and I like to play golf, but if I didn’t have anything else to do, I would most probably be looking at the phone the whole time,” says Mark.

Lioh on the other hand believes that he’s not addicted to the smartphone. He just “needs” it like everyone else.

“I can do without the phone, but it’s just that it’s a necessity in this day and age,” says Lioh, who has no intention of reducing his phone use.