Home Ministry: PDRM can only check phones belonging to suspects and individuals involved in ongoing investigations

The public can write to aduan.tt@rmp.gov.my or call 1800 880 222 to ask questions or file reports of police wrongdoing. — Bloomberg

The Home Ministry has issued a statement to clarify that the Royal Malaysia Police (PDRM) can only request or confiscate handphones from suspects or individuals involved in an ongoing investigation and not the public at random, as reported earlier by some online media.

In a statement released on Nov 19 on Twitter, Deputy Home Minister Datuk Mohd Azis Jamman said he wanted to avoid confusion caused by widely-shared reports claiming that PDRM has the right to check handphones belonging to anyone at anytime.

Mohd Azis added that handphone checks can only be conducted when individuals are suspected of committing wrongdoings under the following acts:

The acts are for offences related to sexual crimes, communications offences, sedition, human trafficking, and terrorism.

The public can reach out to the Standard Compliance Department (Jabatan Integriti dan Pematuhan Standard or JIPS) via email at aduan.tt@rmp.gov.my or call 1800 880 222 to ask questions or file reports of police wrongdoing, according to the statement.

In a Nov 19 report by The Star, Mohd Azis also said members of the public can file reports against police officers who randomly check their phones.

He added that the public should also be aware of their rights and can ask police officers to show their identification cards. 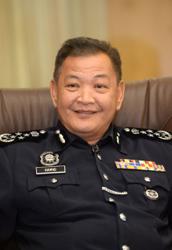 Philippine president has no power to say who are terrorists, says proponent of Anti-Terrorism Act