Malaysia is advancing an anti-monopoly investigation into Singapore-based Grab Holdings Inc., ramping up a broader government push to bring greater competition to its economy.

Malaysia Competition Commission chief executive officer Iskandar Ismail said last Thursday the anti-monopoly watchdog was stepping up the probe into the ride-hailing startup, which was first announced last year by the country’s transport ministry. He declined to elaborate on specific steps the commission was taking.

Grab’s rival Gojek is planning to enter the market with motorcycles, and its top management met with Prime Minister Tun Dr Mahathir Mohamad in Kuala Lumpur in August.

Mahathir’s keen to lower the cost of living for Malaysians, a key pledge that led to his return to power in 2018. His government is trying to expose state-linked companies to competition and introduce open tenders, ordering Telekom Malaysia Bhd to share its high-speed broadband cable network with other operators. It’s also considering to allow consumers choose power suppliers other than state-owned Tenaga Nasional Bhd.

Greater competition could enhance Malaysia’s standing as a business destination. "It sends a signal to foreign investors wanting to enter Malaysia that it’s going to be a fair playing field without unfair advantages to favored companies because of political connections or other reasons,” said Alex Holmes, Asia economist at Capital Economics.

As part of a government effort to stamp out wastage in public spending, Iskandar said the commission is looking into a few companies pitching for state contracts for possible bid-rigging practices. In March, it said eight companies formed cartels to manipulate bids on tenders involving information technology services for a state-linked institution. That was its first bid-rigging case in state procurement since the body’s establishment in 2011.

Iskandar said his commission is fielding more requests from state agencies and private companies wanting to learn how to detect bid-rigging and other anti-competitive practices, and is receiving broad government support.

"Our minister gives us a lot of room,” Iskandar added, referring to Minister of Domestic Trade and Consumer Affairs Saifuddin Nasution. "He just says, ‘Go do your job and we will support you all the way’.” – Bloomberg 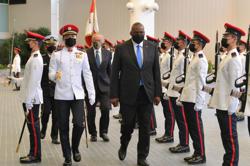