A new, flexible, ring-shaped controller will be released for the Nintendo Switch on Oct 18, alongside Ring Fit Adventure.

The Ring-Con is Nintendo's newest reinvention of the video game controller.

Just as it turned gamepads into waggle wands through the Nintendo Wii, Nintendo has turned the Wii Wheel into a Pilates aid and off-the-wall social gaming accessory.

It's both a game and a fitness tracker, of course, with the Ring-Con accepting one of the classic Nintendo Switch's detachable controllers, the other one placed into the Leg Strap.

Players will take part in various home fitness activities to propel their character on an adventure to confront an evil dragon called Drageaux.

Instead of pressing buttons or moving joysticks, the Ring-Con tracks player movement force and range.

Encounters with other creatures put players through their paces with over 40 different fitness exercises divided into four different categories: arms, core muscles, legs, and yoga-inspired movements.

Players can take things at their own pace, with the goal of enjoying regular exercise.

Away from the progression-oriented adventure, there are other modes that encourage short bursts of activity, better suited to both targeted exercise and social play.

There's also a silent mode that removes heavy impact exercises so that other household members or neighbours won't be disturbed by Ring Fit Adventure use.

As well as recognisable franchises such as the Super Mario and Legend Of Zelda games, Nintendo is well known for its novel approach to controller design.

That has led to not only the intuitive Wii Remote design but also the Wii console's Balance Board, used in tandem with its popular Wii Fit games, and the self-assembly cardboard controller housings and virtual reality kits that form the Nintendo Labo line.

While the 1989 Power Glove, made famous by The Wizard, a feature film released the same year (and co-produced by Nintendo), was manufactured by toy company Mattel with Nintendo's blessing, other early Nintendo controller experiments included the Nintendo Entertainment System's 1985 robot toy R.O.B., and the 1992 Super Scope, which was a shoulder-mounted light gun with rocket launcher stylings. – AFP Relaxnews 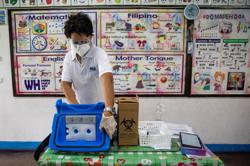