By Matt Day and Noah Buhayar

A pedestrian passes in front of a makeshift tent encampment on a street in the Pioneer Square neighborhood of Seattle, Washington, U.S., on Wednesday, June 5, 2019. A year after Amazon.com Inc. and other companies beat back Seattle's effort to raise money for homeless services through a tax on large employers, the lobbying win has left the campaign to help one of the country’s biggest homeless populations in limbo, with a patchwork of philanthropic offerings rather than a comprehensive effort to address the issue. Photographer: Chona Kasinger/Bloomberg

The wine was flowing as a group of Seattle’s business elite gathered at Bar Cotto, an Italian restaurant in the city’s trendy Capitol Hill neighbourhood, where the menu features an expansive selection of salumi and pizzas topped with truffle oil or Calabrian chili. The topic up for discussion: how to solve the region’s intractable homelessness crisis.

The usual ideas came up. Donations to charities. Tax-code tweaks.

Then Dilip Wagle started talking. The senior partner at McKinsey & Co had written a report saying the city needed to double its spending to provide the roughly 14,000 additional homes needed for people who couldn’t keep a roof over their heads. Philanthropy wasn’t enough, he said, according to attendees of the November function. A lot more money was needed. The exchange underscored an impasse that’s persisted in Seattle a year after Amazon.com Inc and other companies beat back a city effort to raise money for homeless services through a tax on large employers. The lobbying win has left the campaign to help one of the country’s biggest homeless populations in limbo, with a patchwork of philanthropic offerings rather than a comprehensive effort to address the issue.

Many businesses argue that the solution to the challenge isn’t more government spending; it’s government spending more efficiently. Local officials, meanwhile, have failed to articulate a clear plan, while facing a regressive tax system that limits how new funds can be raised. That’s led to a divide that’s left little room for action. 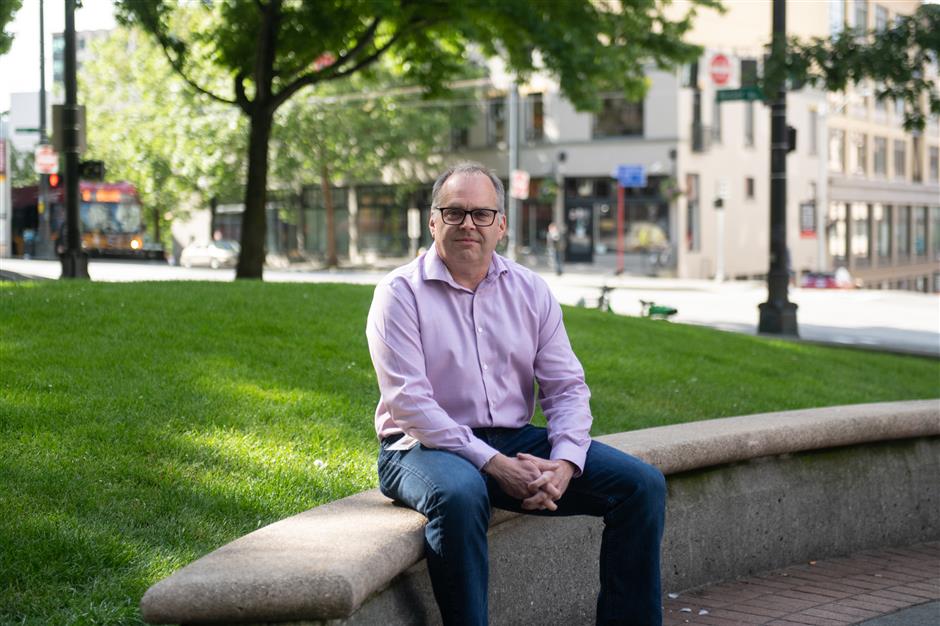 Malone thinks even the conversations over how to address homelessness in Seattle, Washington have stalled out.

"It’s all stalled,” said Daniel Malone, executive director of the Downtown Emergency Service Centre, which provides supportive housing, health and employment aid. Not only did the tax fail, "but I think the fight has kind of stalled out, even the conversations on where to go forward.”

Chronic street homelessness in Seattle has become a constant reminder of civic failure in a progressive city that’s thriving economically. Tent encampments are a regular sight along highways and under bridges, while makeshift shelters have appeared in neighbourhoods where homes regularly fetch more than US$1mil (RM4.16mil). In March, a local news channel produced a controversial documentary on the issue called Seattle Is Dying that attracted millions of views and spurred calls for a more aggressive response. 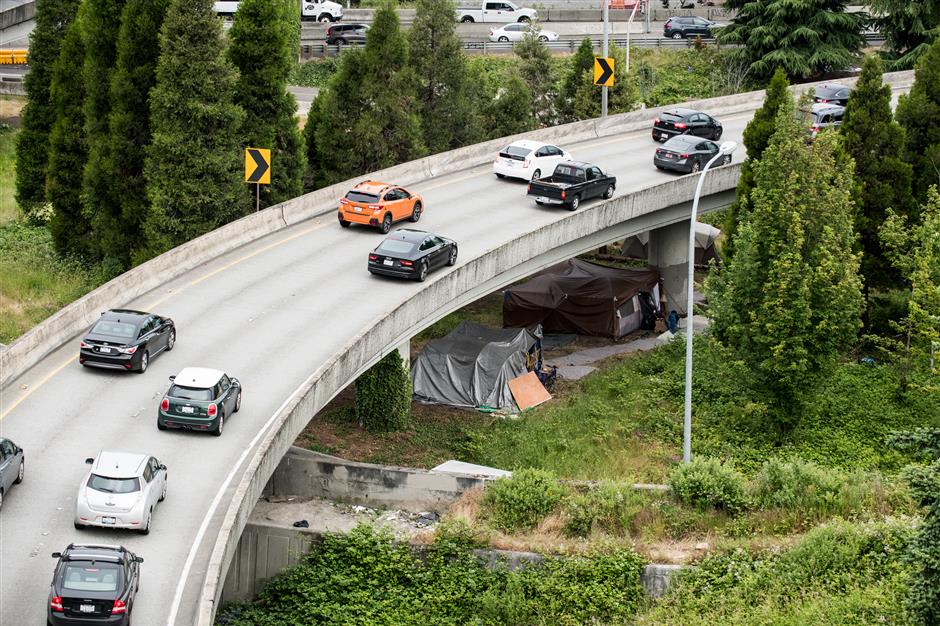 Makeshift tent encampments sit under a highway in Seattle, Washington.

Big companies’ relief efforts have largely centred on donations to non-profits and aid to the mayor’s office. Both Amazon and Vulcan Inc, the investment vehicle of late Microsoft Corp co-founder Paul Allen, are financing the construction of new shelters.

The crisis is spreading up and down the West Coast, with both the Bay Area and Los Angeles recently reporting big increases in their homeless populations, as out-of-control housing costs tip people into living on the streets. But other cities have had more success in raising new funds to tackle the crisis. San Francisco voters last fall overwhelmingly passed a measure, championed by Salesforce.com Inc co-chief executive officer Marc Benioff, that would raise as much as US$300mil (RM1.24bil) a year for homeless services through a tax on big companies. In Los Angeles, residents in 2017 approved a quarter-of-a-cent sales tax.

What Seattle "has failed to do overall is to unite people around a message and a plan”, said Sara Rankin, a professor at Seattle University’s School of Law and the director of the Homeless Rights Advocacy Project who is working with local business leaders and non-profits to address the issue. "So as long as they’re not communicating that, they’re not going to see a lot of activity from the business community.”

The funding gap is large. Wagle and his McKinsey colleague, Maggie Stringfellow, found that the city needed to spend US$360mil (RM1.49bil) to US$410mil (RM1.70bil) a year to help people experiencing homelessness get a permanent roof over their heads, roughly double the outlay in 2017. The bulk of that money would go toward rental vouchers and other programmes that expand the supply of homes accessible to people who can’t afford market rates. Through a spokeswoman, Wagle declined to comment.

Seattle Mayor Jenny Durkan has responded to the crisis by proceeding with a years-long effort to increase the supply of housing, as well as scrounging for funds elsewhere. The city also is working to create a new authority with the county that will spearhead a regional initiative to address the issue. It’s had some success. An annual snapshot of the area’s homeless population, released this month after a single night count in January, showed an 8% drop from a year earlier, the first decline since 2012. Even so, other measures indicate an increase in the number of people who are accessing homelessness services at any point in the year. The mayor’s office declined to comment for this story.

The lack of leadership from Seattle’s business community was highlighted in January, when Microsoft announced that it would set aside US$500mil (RM2.08bil) to help build affordable housing in the region, with US$25mil (RM104.07mil) to address homelessness. But that effort is targeted mainly at Seattle’s suburbs, where the company is based, rather than in the city.

Amazon, Seattle’s largest employer, is allocating 47,000 square feet of space in a skyscraper it’s building for Mary’s Place, which shelters homeless families. The company says the cost of the project, in the works for two years, will total US$100mil (RM416.30mil) over a decade in grants and foregone rent. An Amazon spokeswoman said the company also expects to pay US$30mil (RM124.89mil) in in-kind office space and grants to FareStart, a nonprofit that provides job training to people in poverty or at risk of homelessness. She declined to comment further. Amazon also was represented in a group of business leaders convened by the mayor after last year’s tax fight to explore ways to reform city government and build public support. The group in April offered the first public update on their work, including projects to better collate data on homelessness and build online portals to link people with city services.

"They are doing good things – it’s not enough,” said Heather Redman, co-founder of Seattle venture capital firm Flying Fish Partners, and a member of the council. "It really does feel like the relationship building is almost as important as the tech building. There are fundamental fault lines in Seattle that have almost become so big that you can’t cooperate to do the right thing.” Some in the business community now say they’re open to higher taxes, a sentiment that was scarce during the head tax debate a year ago. Steve Singh, who founded Seattle-area expense reporting company Concur Technologies Inc, said he could support levies on luxury real estate, for instance, or increases in business taxes on large companies.

"These are community problems,” Singh said. "You have to pay for the community that you have.”

Still, Singh said he worries that the government won’t use the new funds responsibly. – Bloomberg